3 quarters of Alice In Chains (Jerry Cantrell, Sean Kinney & Mike Inez) perform their hit Would with Phil Anselmo on vocals & Duff McKagan on guitars. This is from 2006 in Atlantic City. 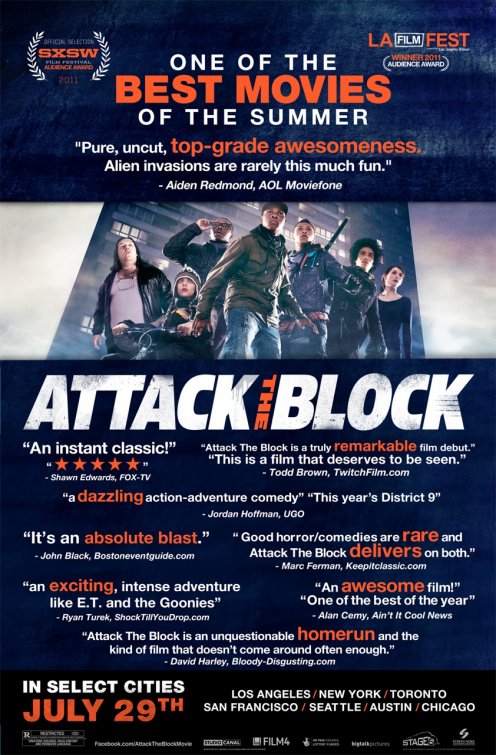 I’ve seen very few British films and can probably only name a handful that I have really liked. Attack The Block is one of them. This is a 2011 British science fiction thriller with elements of horror and some comedy stuff thrown in for good measure. Directed by Joe Cornish the movie stars Jodie Whittaker, John Boyega, Alex Esmail, Franz Drameh, Leeon Jones, and Simon Howard with a smaller supporting role by Nick Frost.

The movie starts off with young nurse Sam who is walking back home on Bonfire Night talking to her mother on the phone. She is accosted on the way by a gang of teenagers who mug her but as the leader, Mose, asks her for her ring, something falls from the sky and into a nearby car. Sam takes the distraction and runs off to her place while the boys investigate the object – which turns out to be a small creature with no eyes and multiple rows of neon teeth. The creature runs off and the boys chase it. After it kills a pet dog, Moses and his boys kills the creature and takes it to  drug dealer Ron for storage and advice as to how to market it. They ask Ron’s boss Hi-Hat to store it in fortified weed room.

More objects begin to fall from the sky. Eager to fight more of the creatures, the gang arm themselves and go to the nearest crash site. They find new, larger aliens with huge claws and multiple rows of luminescent fangs. Outmatched, the boys run off but Moses is arrested by the cops after being identified by Sam who is riding with them in the van. The cops are killed by the creatures and Dennis gets in the van and they drive off away from the creatures – only to crash into Hi-Hat’s car. Sam runs away while the rest of Moses’ gang catch up and confront Hi-Hatz. Enraged about his car, Hi-Hatz threatens them with a gun, refusing to believe their story of aliens – until his henchman is attacked by one, allowing the gang to escape. The gang escape to their block but get attacked by the aliens, forcing Biggz to hide in a trash box. One of the creatures mauls Pest’s leg.

Running into their building, they find Sam is actually their neighbour and force their way into her flat and ask her to treat Biggz’s leg. Just as she patches him up, a creature bursts in and Moses kills it. The boys & Sam run to a nieghbouring girl’s apartment, who is enjoying an evening in with her gals, all friends of the boys. The aliens instead attack from outside, smashing through the window and killing Dennis. As one alien is about to kill Moses, Sam stabs it through the head, saving him. The girls note that the aliens are going straight for Moses and kick the boys out. Out in the hall, Hi-hat and his men are waiting for the boys but are chased into an elevator by an alien. Hi-Hatz kills the alien, though his henchmen perish, and continues his search for Moses. Making their way upstairs to Ron’s weed room, the gang again encounter aliens. Using fireworks as distractions, they get by, but Jerome becomes disoriented in the smoke and is killed by an alien. Entering Ron’s flat they find that Hi-Hatz is already there. Hi-Hatz prepares to shoot Moses but hordes of aliens smash through the window and kill him.

Biggz, still trapped in the bin by an awaiting alien, is saved by Probs and Mayhem, two children, using a water-gun filled with petrol and a flame to torch the creature. In the weed room Brewis notices a secretion all over Moses’s clothes and deduces that the aliens are probably males who are tracking him based on the pheromone scent left by the female that he has killed.  The gang form a plan for Sam, who has not been stained with the pheromone, to go to Moses’ flat and turn on the gas oven. Before she leaves, Moses forces Pest to return the ring they stole from her, feeling guilty for having mugged her. Sam successfully avoids the aliens, turns on the gas and leaves the Block. Moses, with the dead female alien strapped to his back, rushes out of the weed room and into his flat. There he throws the female into the kitchen and the males follow. Using a firework, Moses ignites the gas-filled room and leaps out the window. The explosion destroys the aliens. Moses survives by hanging on to a British flag and pulls himself back in after the aliens are killed.

In the aftermath, Moses, Pest, Brewis and Ron are arrested, considered responsible for the deaths around the Block including the two policemen who had earlier arrested Moses; Sam, however, comes to their defence. In the back of the police van, Moses and Pest hear the residents of the Block cheering for Moses, causing Moses to smile. Despite the annoying gansta rap and gansta talk, in British style too, I liked this movie. It also starts off a bit dull but picks up soon. Nick Frost doesn’t have much of a role and is there to attract fans of the genre. However it didn’t work; despite being hailed as one of the best of 2011 and recent years, the movie only made 3.6 million of it’s 8 million pound budget. Still it has sold well on dvd & bluray and should be labelled as a cult favourite. 8 outta 10 for me.

I can speak English, Malayalam and not too comfortable in Hindi. In that I can understand Hindi almost completely but am not to comfortable in speaking it with enough confidence. I can get by if needed but it’s just that since the mid 90s, I stopped watching Hindi movies and tv shows and I don’t live in an area of India where it is spoken all the time. So I kind have lost touch with the language and I will make a lot of mistakes, mostly grammar, when I speak in Hindi. But yes, I do understand it well and can converse if push comes to shove.

When I was young I learned some Arabic as I was born in Kuwait and lived there till the age of 11. We had to learn some basic Arabic as a 3rd language in our school (3rd after English & Hindi) and it wasn’t given much importance as it was an Indian board school, teaching us the CBSE syllabus that is taught in India, the central Indian school syllabus. Same textbooks, Indian management and mostly Indian teachers. However I soon forgot all the Arabic I learned (which was very little) in a few short years once we settled down in India.

I wish I could speak fluent French, Arabic and Spanish sounds fun. Italian (will also need to gesture a lot and grab my crotch a few times in a conversation), German, Dutch, Cantonese, Mandarin, Tamil, Telugu. If you can speak a lot of languages, it makes it so much more fun when you travel. Oh and I’d love to be able to speak Klingon & Vulcan.