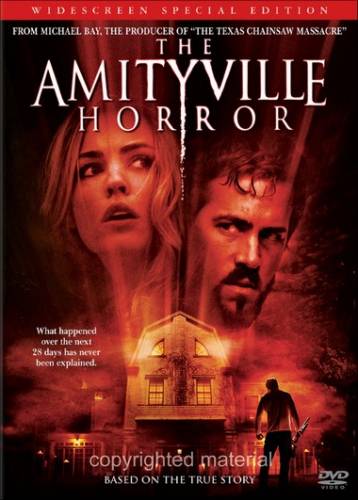 The Amityville Horror – this is a remake of the 1977 book which was ostensibly inspired by a real life mass murder in Long Island, New York. A movie was made in 1979, which is still one of my family’s favourite horror movies, although I can’t remember seeing it. And I didn’t know much about the story either, so that left me as a newbie to the movie. It stars Ryan Reynolds as George Lutz and Melissa George as Kathy Lutz. The couple, along with their three children, move into what they believe will be their dream home; unaware that it previously belonged to the DeFeo family, and that Ronald DeFeo, Jr. had murdered his parents and siblings with a rifle the year before. DeFeo had claimed it was the “voices” that caused him to do it.

It doesn’t take long for the Lutz family to start hearing ghostly voices, and witnessing apparitions, including the ghost of Jodie DeFeo, who appears to little Chelsea as a friend. George is the most affected, and he eventually becomes a danger to those around him. In the true story (at least, some believe it to be true) that inspired “The Amityville Horror,” George Lutz woke up demonized every night at 3:15 a.m., the exact time a boy living in his house a year earlier killed his family The local priest is called in to bless the house, and he fails, warning Kathy to leave the house before it’s too late.

There are some creepy moments in the film, which dissapoints because it ends so quickly and without proper closure as such. There were so many angles that the movie makers could have tried, in order to really make this an excellent movie. I read that this version is more true to the book by Jay Anson and not the original movie of 1979. Hence people who saw & liked the first movie may have reservations after seeing the 2005 version. The kids in the movie do a terrific job, Melissa George plays a convincing young mother torn between protecting & raising her three kids and the love she has for her new husband.

But the top marks for the movie should go to Ryan Reynolds, who plays a good disturbed character. Reynolds uptil then know more for his goofy characters and his funny roles like “Michael Bergin” in the sitcom series Two Guys & A Girl and as “Van Wilder” in National Lampoon’s Van Wilder. A guy who went for a total change over from a comic actor who normally makes us laugh and wince to hilarious & disgusting antics like farting & stuff, stuns in a total makeover role for him. I give the movie a 7 outta 10! Had this yesterday. It’s a Tex-Mex veggie sandwich from Cafe Coffee Day. Was quite good.