I’m going to be applying for a credit card soon. For the very first time. At the age of 36. I have always been anti-credit card for most of my life. My policy was “if I don’t have the money, don’t spend it!” It seemed to be the wisest thing to do at the time. However, I am finding that it’s difficult to go along without a credit card as the months go by. There’s just so much stuff that I feel that I need it for and can use it for and not having one is a pain in the ass. Coming up in February it will be time to renew my website’s server space (well, if the world survives the 21st of December, 2012 that is) and the only way to do so is to pay for it with a credit card. The past 6 times I have”borrowed” my father’s credit card and then immediately paid it off using my cheque book as I didn’t want any issues coming against that amount. It’s not much, it’s less than $44 or less than Rs.2,400 or thereabouts.

For the past 6 years that’s the only time I have used a credit card. Once a year! Now I could have used a credit card many times but not having one, I make do with my debit card or through cash or netbanking. But not having a credit card is a hindrance. For instance, my server space provider being an American company, only accepts payments through CC or Paypal. I need a CC to create a Paypal. Also, for getting paid for online work, for anything that I would like to freelance for and that is outside of India, Paypal is the preferred method of payment. I have lost many such opportunities just because I didn’t have a Paypal account. Damn! That is so annoying. Plus if I want to buy a new laptop or something like that I would need an EMI against the amount of the system – but they only accept EMI on credit cards! See my point?

So I am applying for a credit card soon to solve my problems. I just hope I don’t create new ones by overusing on it. But I can’t see myself going for long without one. I just need to get my PAN card in order and once that is done, I will apply for one. Standard Chartered, ICICI or HDFC. One or the other. I need one. 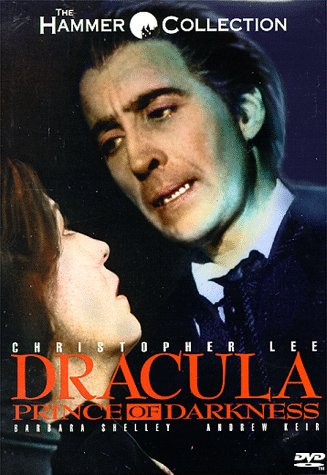 Dracula : Prince Of Darkness is the second sequel to 1958’s Dracula or Horror Of Dracula. Makes me think these guys should have been more careful when naming the films. The 1966 film sees Christopher Lee returns as the Count and once again it’s helmed by director Terence Fisher for Hammer Studios. However we do not have Peter Cushing returning as Van Helsing. Hammer’s scream queen Barbara Shelley, Andrew Keir, Francis Matthews, Suzan Farmer & Charles Tingwell costar in the film.

The movie starts off with a reminder of how Van Helsing killed Dracula by forcing him into the sun’s rays. All that is left of the Count are his ashes and his ring. 10 years later four English tourists, the Kents, are warned to not go near the castle by Father Sandor – who has just returned from stopping some locals from staking a dead young girl on the fear that she was a vampire. The Kents head on to Carlsbad but are dumped in fear by their coachman right near the castle, as it is almost dark. A driverless horse carriage approaches them and leads them to the castle, where they find a dinner table set for them. A butler, Klove, explains that his master, the late Count Dracula, ordered that the castle should always be ready to welcome strangers. After dinner the Kents settle in their rooms.

In the night, seeing Klove dragging a coffin, Alan decides to investigate and follows him, only to be killed. Alan’s blood  is drained into the coffin holding Dracula’s ashes and the vampire lord is resurrected. Klove entices Alan’s wife Helen to the crypt where she becomes Dracula’s first victim. The next morning Alan’s younger brother Charles & his young bride Diana can’t find Alan or Helen and to pacify a frightened Diana, Charles takes her to a hut outside the castle and returns to search for his brother & sister-in-law. Klove approaches Diana and tricks her into following him back to the castle; only it is Helen, now a vampire, that awaits her. She is stopped from biting Diana but an enraged Dracula who wants the young Diana for himself. Menwhile, Charles finds his dismembered brother’s remains and distraught, he walks in to find Dracula about to bite his wife. Charles fights with Dracula but is no match until he sees that Helen has been burnt by Diana’s cross. Charles uses a makeshift cross to ward off Dracula and takes Diana away with him.

They escape the castle in a carriage, but lose control on the steep roads. The carriage crashes and Diana is unconscious. Charles carries her for several hours through the woods until they are rescued by Father Sandor, who takes them to his abbey. While waiting for Diana to awaken, Sandor tells Charles about Dracula. Klove later arrives at the abbey, carrying two coffins with Dracula & Helen in them and is refuses entry by the monks. However Ludwig, a patient at the abbey, who is controlled by Dracula and invites the vampire inside. Helen convinces Diana to open the window for her, claiming that Dracula is controlling her. Diana does, and Helen bites her arm only for Dracula to drag Helen. Charles bursts into the room and drives the vampires out while Sandor sterilises the bite on Helen with the heat from an oil lamp. Helen is captured and staked by Charles but Ludwig again helps Dracula to get to Helen and the Count is able to escape with her in the carriage.

Charles & Sandor follow him to the castle and kill Klove with a shot and Dracula’s coffin is thrown onto the icy moat and Charles attempts to stake the vampire but is beaten back. Shots fired by Sandor break the ice and the vampire sinks into the freezing waters as the movie ends. 6.5 outta 10 for me! Dracula never talks in this movie, just hisses and groans.