I bought this 6 set of beer tumblers – Luminarc Washington 200 ml that I bought using some coupons availed on online shopping. 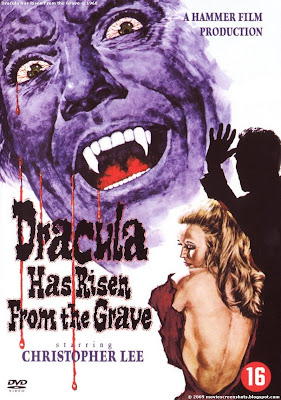 At the end of the last movie, Dracula’s body is trapped under the frozen lake and presumed to be dead. In Dracula Has Risen From The Grave, a 1968 British horror film directed by Freddie Francis for Hammer Films starring Christopher Lee as Count Dracula, with support from Rupert Davies, Veronica Carlson, Barry Andrews, Barbara Ewing, Ewan Hooper and Michael Ripper, we start of with a prologue that shows a young alterboy getting a shock on finding a corpse of a young woman crammed inside the church’s bell with two bloody punctured holes in her neck – presumably a victim of Dracula. A year later a Monsignor comes to the town to find the now mute altar boy, the villagers who refuse to attend mass at church because “the shadow of Dracula’s castle touches it” and a priest who has lost his faith. The Monsignor chastises the priest and takes him on a trip to the castle. The priest is unable to go further and stops on the way while the monsignor exorcises the castle, attaching a large metal cross to its gate. As a huge storm strikes, the priest falls and is knocked out, cutting his head on rock. His blood trickles into a frozen stream; through a crack in the melting ice it trickles on to the lips of the preserved body of Count Dracula and brings it to life.

Believing that the priest has gone back home safely, the monsignor goes back to the town and reassures the villages and goes back to his own city of Kleinenberg. Dracula has now got the priest under his control and is furious to find that he is unable to go to his own castle and seeks revenge on the monsignor. So he takes the priest and goes to Kleinenberg and in search of his next victim – the monsignor’s beautiful niece Maria. At a bar & bakery where Maria’s boyfriend Paul works, the priest seeks a room. Paul goes with Maria to meet her mother and uncle, the monsignor for dinner on Maria’s birthday. However the monsignor takes offense at the fact that Paul is an atheist. An upset Paul goes back to the bar and gets drunk and Zena the tavern girl tries to take advantage of him until Maria sneaks in to meet him. As Zena leaves to go home, she falls prey to Dracula who feeds on her. The Count tries to use Zena to get Maria to him but Paul intervenes and chases Zena away.

Dracula kills Zena in anger and has the priest burn  her body, denying her life as a vampire. Dracula then visits Maria while she sleeps and feeds on her. The monsignor sees the signs of impending vampirism in his niece and decides to chase Dracula but is knocked down. In his dying state he recruits Paul to help, who unwittingly gets the priest to help him. unable to break free from Dracula’s influence, tries to attack Paul. Paul forces the Priest to lead him to Dracula’s lair beyond the tavern bakery. They stake Dracula through the heart; the faithless Priest and the atheist Paul cannot complete the rite and Dracula removes the stake himself. He draws Maria to him on the rooftop, and they are pursued by Paul and the Priest. At his castle Dracula makes Maria remove the metal cross and she flings it clumsily onto the ravine below. Paul arrives to face off with the count and during the struggle Dracula falls onto the lands on his back, impaled on the cross, bleeding and then dissolving to dust. Seeing this Paul crosses himself, no longer an atheist and returns to christianity.

Ofcourse you know what I think of that (utter bullshit) but the rest of the movie is ok. Not great but once again the gothic stylings make the movie watchable with two real sultry beauties in Carlson & Ewing. 6.5 out of 10!

Whenever I look back at my life I keep thinking that the turning point in my life was just after my 10th grade. If I had made a couple of different decisions in my life I would have had things so much more better and things would be so much pleasant right now. I made foolish decisions not based on using my brain but going by emotion and peer pressure and not thinking straight. Hindsight being 20/20 I wish I could have made a couple of changes and knowing what I know now I would have been more careful and taken care of my life. So if I could snap of time and create an alternate history of my life from that point I would. It would be in the summer of 1992 and it would be something like this:

My 10th standard just got over and I had the choice of going to either predegree in a college or go and do 11th & 12th in another school (since my school stops at the 10th grade). Now predegree was the norm during those years and only by the 90s would they stop that stupid practise and make all school kids do their 11th & 12th in a school instead of a college. That should have been the way to go and one of my closest friends asked me to join him in a good school but I was so fed up of wearing school uniforms and thought doing predegree was the best option. So yeah, in this alternate timeline I would wait and enjoy the 3 months summer vacation and then opted to do 11th & 12th in a good school. Also I wouldn’t choose science grade! No way, I would choose arts or commerce or something like that. I had no aptitude for science and I should have listened to good advice but I didn’t. I thought engineering was where I should go and that’s where I went.

And the other main thing – I would not have chosen St.Paul’s College if I did still go for predegree. That was the worst decision of my life. I made the wrong choice in friends and I paid the price for it. I went for all the wrong choices and they all did well and I suffered. I also went for the wrong girl. So if I didn’t chose St.Paul’s I would never have met her and fallen for her and had an all consuming relationship for 3.5 years and get my heart ripped outta my chest. I wouldn’t have the resentment that I have had and seen all that I have seen and be where I am. So in this time line I do not meet here, never even set my eyes on her and I won’t spend most of my 20s in an angry stage.

So I go on do my stuff, get a proper education and maybe even go for a post graduate course. I start work and do well early on. I meet a nice pretty girl and go steady for a few years until I’m 28-29 and it’s time to settle down. With some help from financing we get a place of our own and get married and settle down. We both have really good paying jobs in good companies and are happy. We share our home with 2 dogs that we raise as our fur babies. Life is good, I’m married to my best friend and she is to hers.

Sounds nice. I wish I lived it!