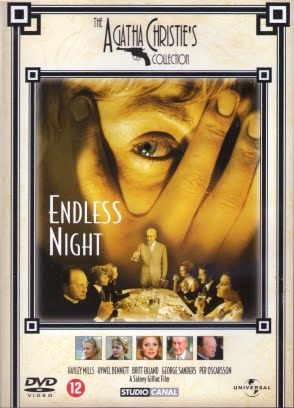 Based on novel by the same name Agatha Christie’s Endless Nights is a 1972 British crime movie with perhaps a shade of supernatural (not really as we find out) in it. It’s a movie I have seen a couple of times many years ago and felt sad while watching it and I remembered it a couple of days ago and just had to download it and watch it again. Directed by Sidney Gilliat and starring Hayley Mills, Britt Ekland, Per Oscarsson, Hywel Bennett and George Sanders. Until watching the movie I didn’t know any of the actors except ofcourse for sexy Britt Ekland but it is impossible for a straight guy to watch the movie and not fall in love a little with Hayley Mills’ character Ellie.

Ok so the story goes like this – Michael is an ambitious but aimless drifter who has lofty dreams that never seem to take place. He goes from job to job much to the chagrin of his well meaning mother, who prays that he doesn’t take after his ‘useless’ father. In the beginning of the movie, Michael is a rent a chauffeur, who visits museums to look at pretty paintings and pretending to big for pricy art in auction houses. He gets fired from his job when he pisses off an obnoxious American tourist & customer. He then goes to spend a day by himself as he dreams of building a magnificent house on a particular spot of land along the Devon coast called Gipsy’s Acre. While snapping photos there he chances upon lovely Ellie, who is an American visiting England. They both hit it off and go off to have tea after spending a few hours talking in the meadows but not before being spooked by Miss Townsend, an old woman who claims to have been a member of the last family that owned the land. Unknown to him, Ellie is actually a wealthy heiress and they fall in love, promising to meet each other in a few weeks.

Michael is angry with her on finding the truth and even more angry when Ellie confesses that she bought Gipsy’s Acre. But when she claims true love for him, they make up and get married in a town hall. The now very rich young couple – Ellie having turned 21 and having control over her inheritance – decide to build Mike’s dream home in Gipsy’s Acre and give the job to a famous architect who had befriended the two of them separately. Meanwhile Mike has to face Ellie’s unhappy family – her step mother and her new husband, uncle and aunt and uncle Andrew the family lawyer who is more forgiving. Despite his good natured charm uncle Andrew tells Mike that he has been asked to offer Mike a large sum of money in exchange for a quiet divorce. Mike refuses and says that he truly loves Ellie and she him. The young couple avoid the family and settle into their new house when Ellie’s German companion visits them. Tension arises when her weekend stay looks like being an almost permanent move instead and Mike & Greta clash. At a party thrown for them by the local doctor, Ellie has to put herself in between a quarreling Mike & Greta in full view of the other guests and Ellie’s family, who also do not approve of Greta.

With the curse hanging over the land and weird sightings of Ms. Towsend who seems to haunt the couple, mysterious accidents pile up and soon Ellie has a midnight accident. Later while Greta is away and Mike is at his new antique shop, Ellie has a fall while horse riding and is found dead. A devastated Mike has the local authorities question the circumstances of her death but they find none. Mike travels to America to sort out some estate matters and meets with Andrew while Greta takes care of things at Gipsy’s Acre. Just when he is to leave back for England, Mike is called to his architect friend’s deathbed who gets angry at him for his ‘foolishness’! We are left to ponder as to what he meant as the architect dies soon after. Andrew says that there is only more paperwork for Mike left which he will mail to England. Mike takes a long trip by ship back to England and comes back home only to see an image of Ellie waiting for him near a tree. He brushes off the image and goes into the house – where Greta is waiting with champagne & celebration! It turns out that the two planned the whole thing together and now engage in sex.

As we find out in flashbacks, Mike met Greta in Amsterdam and they became lovers. Greta told him about Ellie and they planned the chance meeting which was meant for Mike to woo Ellie. Their plan was to make Ellie fall in love with Mike and have them get married and have Mike get control of Ellie’s wealth. Once that was done, Mike paid Ms. Townsend to spread the ‘curse’ of the land and to scare Ellie, even spooking her horse while Ellie was riding and causing a fall. Ellie died due to her pills being altered in such a way that the chemicals that killed her couldn’t be detected after a couple of hours. And now Mike & Greta have all that wealth and the house to themselves for sharing. Also in flashback we see Mike letting his best friend drown in their childhood just so he could have his friend’s expensive gold watch. However Andrew had a spy track Mike and had found out about Mike having met Greta before he met Ellie and also found a photo of the two together in Holland. Greta & Mike argue and quarrel and Mike goes mad and kills Greta and pushes her body into the pool. The next morning Mike is arrested by the police with evidence provided by the local doctor & uncle Andrew.

The movie is narrated by Mike as told to his doctors at the mental asylum. As they ask him to repeat the story again for recording, Mike hallucinates about an image he had seen as a child and then a haunting & scary image of Ellie standing in Gipsy’s Acre and a single eye – Mike screams as the movie ends!

My bedroom. I live in a small 3 bedroom apartment with my folks and it’s on the 7th and top most floor of a building. Just 2 apartments per floor so just 14 in all. My room is on left side of the end of the apartment, if you look at the front door to be the front of the apartment. The second bathroom is next to my room, not attached but right next to my room and just adjacent to the bathroom is the common room which serves as the room with the iron board, library & storage room and prayer room for my folks.

So on the left side of the bathroom, and my door faces the door of the common room, is my bedroom. Ofcourse I have the queen size bed, which I push against the wall. As said before, I only use half of the bed despite my size – lonely bachelor I’m still leaving the right side of my bedroom for whichever woman wants to share it with me. Ofcourse I am kidding – not just any woman! I have standards you know! I have a small computer table on which my laptop, speakers, some dvds, 4 external hard drives and various other stuff rests. A chair for me to rest my ass on while I spend most of my free time on my computer. I also have a steel cupboard in my bedroom and a round clothes rack and I also have an old computer chair, which is damaged but still serves as a bit of storage for me – I keep some books and stuff on it.

I also have a built in cupboard to go with the steel cupboard. The built in cupboard is where I keep my clothes – underwear, shirts, trousers, more books and sorted files and cheque books in some of the drawers. Other than that there is nothing else, save for the cable for my broadband connection that comes through the windows and upto my desk which is on the wall opposite from the window. I have an artwork framed and a clock and that’s truly it!