Taken almost a month ago at a Arabian restaurant called Burfis near my place that I go to a couple of times a month. They are known for their Shawarmas but I find that their grilled chicken in the Al Faham style is just excellent. They are made just right and I enjoy them with some porottas. 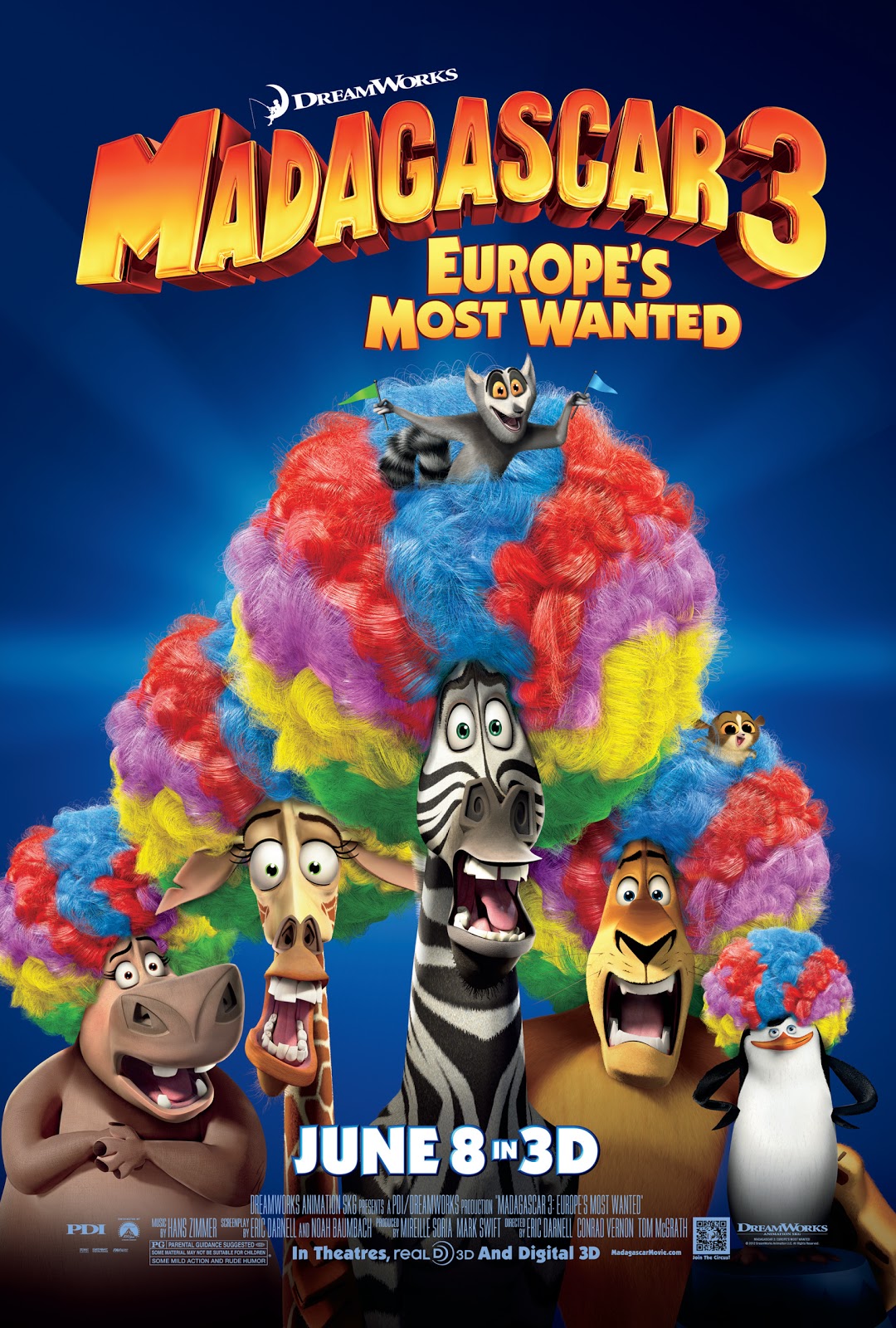 After Ice Age, the next big animated gang is Madagascar. The first movie was just simply superb and the second one was about the same too. After watching this, the 3rd movie of the beloved zoo animals who make it out, I’m not feeling the same. Madagascar 3 : Europe’s Most Wanted, released in 2012  is directed by Eric Darnell, Tom McGrath and Conrad Vernon. Ben Stiller, David Schwimmer, Jada Pinkett-Smith & Chris Rock return as the voices of the 4 main characters and returning once again are Sacha Baron Cohen, Cedric the Entertainer & Andy Richter. Newcommers are Tom McGrath, Bryan Cranston, Jessica Chastain & Martin Short.

So what’s the movie about? Alex is homesick for New York and the zoo and having big goodbye to the penguins 2 weeks ago and even his friends making him a miniature New York city with sand doesn’t satisfy him. He convinces Marty, Melman & Gloria that they should head out to Monte Carlo  to get the penguins to fly them back to New York City, which they agree to. At the casino where the penguins and the monkeys are living it up, King Julien blunders and cases havoc.Monaco’s animal control sends for Captain Chantel DuBois to capture and deal with the animals.  A high-speed chase ensues between the relentless DuBois and the animals in a truck driven by the penguins to reach their aircraft and they depart on the plane, barely escaping DuBois.

But the plane fails while still in France and they fall down. With Dubois hot on their heels, the friends seek help from a traveling train filled with circus animals and lies that they are from a circus in the US. They are reluctantly taken on board the leaving train. Wanting to help the circus in return and get them an American tour, the penguins use money they got while disguised in the casino and buy the circus and get rid of the humans. At the next show however the performances proves to be a disaster and the crowd turns angry and violent and demand their money back and the animals are chased to the station from where they head for London. En route to London, Stefano soon reveals to Alex that Vitaly was once their inspiration. Once a professional ring jumper who used to leap through incrementally smaller hoops to excite crowds and was always pushing himself to the limit, his attempt at an impossible jump through a flaming pinkie ring ended in disaster when he burned his fur, which he had coated in extra virgin olive oil in order to slip through the narrow opening, destroying his confidence in his talent and the whole circus suffered by his example.

Alex stops the train in the Alps and inspires the animals to get new acts and make a solid impression. His enthusiasm rubs off on everyone except Vitaly. Alex, Marty, Melman & Gloria are in the act too and it seems that Gia & Alex are falling in love. As too are King Julien and Sonya, a bear! Dubois meanwhile escapes trouble with the local cops and gets her men together.  In London, the troupe prepares for the promoter in the audience, but Vitaly is discovered packing to leave. Alex convinces Vitaly to stay by reminding him of how he enjoys performing the impossible and suggests that he uses hair conditioner as a safer lubricant to perform his flaming ring jump. As a result, Vitaly’s stunt is performed perfectly, which proves to be the opening of a spectacularly successful show. After the impressed promoter arranges for an American tour, DuBois shows up with a paper showing that Alex was missing. Though the penguins are able to foil DuBois’s plan, Alex is forced to confess that the four of them are just zoo animals trying to get home, disappointing the others who feel used and lied from the four of them. Also, Julien breaks up with Sonya, telling her that he can’t be a part of the circus.

All the animals finally arrive back in New York but Alex and gang are disheartened and find the zoo to be now small and restrictive. They decided to try and rejoin the circus but Dubois captures them only to have the zoo authorities mistake her for a hero and returning the animals. Julien is able to alert the circus animals of the others’ predicament and upon learning about the zoo animals’ plight, Gia and Vitaly convince the circus animals to rescue their friends and they set out for the zoo, performing aboard a flying circus. The circus animals arrive in time to stop Dubois from secretly trying to kill Alex and a massive brawl occurs where the circus uses all of what they had developed as part of their revamped act. As the group tries to leave, DuBois attempts to kill Stefano, who is stranded at the zoo. However, Alex saves Stefano and all the animals then defeat DuBois and escape. Heartened by this valiant demonstration of their new friends’ love, Alex and his friends decide to join the circus permanently. Meanwhile, DuBois and her men find themselves inside shipping crates on a cargo ship bound for the island of Madagascar.

The film was released on June 8, 2012, to critical and commercial success; it is the best-reviewed film in the series, with a 78% “Certified Fresh” approval rating on the review aggregate site Rotten Tomatoes. It is also the highest-grossing film in the series with a worldwide gross of over $741 million but I still found it lacking compared with the first two. Still 8 outta 10!