For such a hilariously comedic personality, she mostly sings sad songs. Here is Jann Arden singing The Devil Won live in Studio Q! 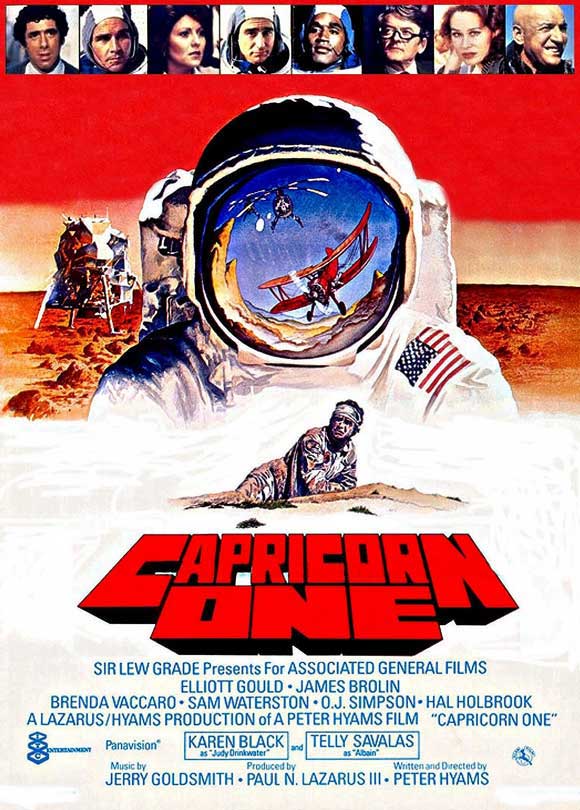 Hadn’t heard anything about this movie until a few days before I watched it. Capricorn One is a 1978 movie s written and directed by Peter Hyams and stars Elliott Gould with James Brolin, Sam Waterston and O. J. Simpson. The plot of the movie is a hoax created by NASA’s administration to cover up a failed Mars exploration mission in order to save the funding for future explorations and to save the faces of the administration and politicians who have supported the mission and other like it.

A planned manned mission to Mars – the three astronauts in the spaceship are pulled out just before launch by as Dr. James Kelloway as  a faulty life-support system supplied by a corrupt NASA contractor will kill the astronauts during the flight. As the manned space program needs a success to continue, they find themselves forced to falsify the landing rather than cancel the mission. Air Force Colonel Charles Brubaker, Air Force Lieutenant Colonel Peter Willis & Navy Commander John Walker are the 3 astronauts and they are given an explanation as to why they are pulled and informed that the launch will take place without anyone in it and that they will help counterfeit the television footage during the flight to and from Mars, and that it is their patriotic duty to participate for the sake of national morale and prestige. Initially they refuse, but Kelloway, himself under extreme duress (from whom, what, or where is never clearly specified) to go through with the hoax, threatens their families if they do not cooperate, claiming a bomb will explode on a plane carrying the family members.

So the astronauts stay in seclusion and during the flight and are filmed landing on Mars within a studio located at the base. hey also appear in a live TV broadcast talking to their wives in a normal dialogue – despite the fact that radio signals take at least several minutes to reach Earth from their location in space. Everything seems to be going well until technician Elliot Whitter notices that there are technical “glitches” – ground control receives the crew’s television transmissions before the spacecraft telemetry arrives. His findings are dismissed by Dr. Kelloway but Elliot mentions this to his journalist friend Robert Caulfield. When Elliot goes missing and his very existence seems to have been wiped out, Caulfield starts to investigate the mission surviving several attacks on himself and his reputation. His suspicions are strengthened by a talk with Mrs. Brubaker – who reveals a secret message that Charles gave her while they chatted via a transmission. Meanwhile something goes wrong – on entering the earth’s atmosphere the empty spacecraft unexpectedly burns up due to a faulty heat shield during re-entry. Everyone except for the small NASA team believes that the astronauts died in it. Knowing that the only logical solution for their captors is kill them during the cover-up process, the 3 astronauts escape in a Learjet, which runs out of fuel soon after take-off.

They are forced to crash land in the desert and the 3 astronauts split up their supplies and head off in 3 different directions, giving them the maximum chance of atleast one person making it to civilization and inform the truth to the world. The army sends helicopter behind them and Brubaker is the only one who escape capture and makes it to a gas station/store at the edge of the desert. Caulfield’s investigation leads him to the desert, where he finds the military base and the set. With the help of crop-dusting pilot Albain (Telly Savalas in a memorable cameo), he rescues Brubaker before the men in the helicopters can capture or kill him. The film ends with Caulfield and Brubaker arriving at the astronauts’ memorial service, exposing the conspiracy in front of television cameras and scores of witnesses who are astonished at his arrival and the cover-up is revealed.

The movie ends with Brubaker & Caulfield running towards the funeral being held and the families watching stunned as a ‘dead man’ runs towards them. We are left to imagine the chaos that unfolds and that was a good move by the makers of the film. It’s an interesting movie to watch. 7.5 outta 10 for me!