The first movie in the series was 1959’s The Mummy starring Christopher Lee & Peter Cushing. In 1895’s Egypt archaeologists John Banning (Cushing), his father Stephen (Felix Aylmer) and his uncle Joseph Whemple (Raymond Huntley) are searching for the tomb of Princess Ananka, the high priestess of the god Karnak. As John suffers from a broken leg, he is unable to join his father & uncle as they enter the tomb. Despite the warnings of a local man named Mehmet Bey, forbidding them to enter the tomb and telling them or a curse, Stephen and Joseph ignore him, and discover within the sarcophagus of Ananka. While alone for a few minutes Stephen reads from the  Scroll of Life and screams off camera and is found in a catatonic state. 3 years later he comes out of the catatonic state back in England and sends for his son and tells him that when he read from the Scroll of Life, he unintentionally brought back to life Kharis (Lee), the mummified high priest of Karnak. Kharis s sentenced to be entombed alive to serve as the guardian of Princess Ananka’s tomb as punishment for attempting to bring her back to life out of forbidden love. Now, Stephen tells his disbelieving son that Kharis will hunt down and kill all those who desecrated Ananka’s tomb.

Mehmet Bey, a devotee of Kharis, comes to England in the guise of a businessman and has the mummy shipped to him. While being transported to Bey’s mansion, the two men driving the cart drop the box into a bog. Later, using the Scroll of Life, Mehemet exhorts Kharis to rise from the muck, then sends him to murder Stephen Banning. When Kharis kills Joseph Whemple the next night, he does so before the eyes of John Banning, who shoots him with a revolver at close range to no effect. With John being the next possible victim, the unbelieving & skeptical Police Inspector Mulrooney is assigned to solve the murders. While Mulrooney investigates, John notices that his wife Isobel bears an uncanny resemblance to Princess Ananka. Mehemet Bey sends the mummy to the Bannings’ home to slay his final victim. However, when Isobel rushes to her husband’s aid, Kharis sees her, releases John and leaves. Suspecting Bey, John later pays a visit to the foreigner’s house, much to the latter’s surprise. Once John leaves, Bey has the Mummy go on a second attempt on John’s life. Kharis first knocks Mulrooney down and then finds and starts to choke John. Alerted by John’s shouts, Isobel once again causes Kharis to release him. When Mehemet orders Kharis to kill her, he refuses and kills Mehemet instead when he tries to finish her off himself.

The mummy carries an unconscious Isobel into the swamp, followed by John, Mulrooney and other policemen. John yells to Isobel and when she regains consciousness, she tells Kharis to put her down. The mummy reluctantly obeys and when Isobel has moved away from him, the policemen open fire, causing Kharis to sink into a mire, taking the Scroll of Life with him.

The Curse Of The Mummy’s Tomb came out in 1964 produced, written and directed by Michael Carreras, starring Terence Morgan, Ronald Howard, Fred Clark and introducing Jeanne Roland. The plot is unrelated to the first one and features a different mummy legend. In 1900 a mummy known to be Prince Ra is discovered in a tomb by Egyptologists John Bray, Sir Giles Dalrymple & French Professor Eugene Dubois. Professor Dubois’ daughter, and Bray’s fiancee, Annette is also part of the crew as an Egyptology expert. As the movie opens, Dubois is fleeing across the desert, pursued by Bedouins. They catch the old man, stab him to death, and then cut off his left hand. All the artifacts in the tomb are brought back to London by the project’s backer, American showman Alexander King (played boisterously by Fred Clark). King who plans to recoup his investment by staging luridly sensational public exhibits of the Egyptian treasures, goes about promoting the exhibits and has several photographers and news reporters around at all times.

However things start to go bad for all concerned when the mummy starts to come to life and proceeds to kill off various members of the expedition. Characters are bludgeoned to death, blood spilt and in the film’s most memorable scene, the mummy crushes the head of an unlucky Egyptian beneath his huge foot. Annette acquires an admirer, an amateur Egyptologist by the name of Adam Beauchamp (Terence Morgan), who seems to know a little too much about Prince Ra-Antef and the circumstances of his death. Beauchamp reveals that Ra was killed in exile when his younger brother, Be, sent assassins out to get him and that the assassins cut off the prince’s left hand as proof that they had accomplished their mission. Beauchamp turns out to be Be reincarnated and is out to get a bride for himself in the afterlife. Bray, Hashmi Bey (an Egyptian trying to get the artifacts sent back to Egypt) and an English policeman attempt to figure out what’s going on and put a stop to it.

Adam convinces Annette into running away from England with him. The mummy chases after Adam who uses the words from a medallion to stop him but gets clocked.  The cops, John and Hashmir Bey find Adam & Annette who tells them of the mummy. Later, the mummy attacks John and when Hashmir pleads with the mummy he crushes the Egyptian’s head and escapes. Annette ponders why the mummy is after Adam. He takes her to his lair filled with Egyptian artifacts. The pharaoh had cursed Be for killing Ra; Bea is cursed with eternal life until RA’s mummy kills him. Later the Mummy appears and attacks Annette on Beauchamp’s command. When John and the cops head to the rescue, Beauchamp has the mummy carry Annette off. The mummy takes the medallion and keeps Adam from stabbing Annette. The mummy kills Beauchamp and while walking tears the ceiling down which collapses on him. John and the cops find Annette. 3 years later The Mummy’s Shroud was released by Hammer which was directed by John Gilling. Set in 1920 a team of English archaeologists on an expedition find the lost tomb of the boy Pharaoh Kah-To-Bey. In flashback scenes we see the story of how Prem, a manservant of Kah-To-Bey, spirited away the boy when his father was killed in a palace coup and took him into the desert for protection. Unfortunately, the boy dies and is buried. The expedition is led by scientist Sir Basil Walden and funded by business man Stanley Preston. Preston’s son Paul, expert linguist Maggie Claire de Sangre and Harry Newton are the others in the expedition. They ignore the dire warning issued to them by Hasmid, a local Bedouin about the consequences for those that violate the tombs of Ancient Egypt and remove the bodies and the sacred shroud. Just as they open the tomb Sir Basil is bitten by a snake; he recovers, but has a relapse after arriving back in Cairo.

Preston takes advantage of this and commits him to an insane asylum, to take credit for finding the tomb and Prince’s mummy himself. Preston, much the hero of the media as he has led a rescue search to find the expedition that they had considered to be lost, soaks up every extra minute with the press and poses for photos as often as he can, much to his wife Barbara’s embarrassment. Meanwhile, after being placed in the Cairo Museum, the mummy of Prem is revived when Hasmid chants the sacred oath on the shroud. The mummy then proceeds to go on a murderous rampage to kill off the members of the expedition, beginning with Sir Basil after he escapes from the asylum. The mummy kills of the others in various fashions having photographic acid thrown in Harry’s face and throwing Basil from a window. The local police conducts several investigations following each murder and forbid the remaining members of the expedition from leaving the country. Stanley Preston attempts to bribe his way out and sends out his assistant Longbarrow to purchase tickets. Longbarrow is killed in the night when he breaks his spectacles and doesn’t see the mummy lunging for him. Barbara meanwhile chooses to stay back in Egypt until the investigations are over.

Scared for his life Stanley Preston, after repeated attempts to evade the murder investigations and flee for his own safely, is murdered in a Cairo sidestreet by the avenging mummy. All ends happily thanks to the intervention of remaining members of the party, Paul Preston and Maggie, who succeed in destroying the Mummy in a very dramatic and beautifully staged finale. And finally the last movie is the series, Blood From The Mummy’s Tomb came out in 1971 and stars Andrew Keir, Valerie Leon, and James Villiers. Directed by Seth Holt the story  was adapted from Bram Stoker’s novel The Jewel of Seven Stars. An expedition led by British archeologist Professor Fuchs (Keir) attempts to locate the cursed tomb of an evil Egyptian princess, who name has been eradicated from history. Her body, found 2000 years after her death, is still youthful and perfectly, unnaturally preserved. At the same moment that they find an amulet bearing her name – Princess Tera – and they say it out, Fuch’s wife back home in England delivers a baby and dies immediately. Obsessed by her beauty, Fuchs has her shipped to his house where he builds secret shrine in his basement. Each member of the expedition is given one of the artifacts surrounding her tomb – a cat’s statue, a skull head of a wild cat and a snake statue – for safe keeping.

As his daughter Margaret grows, it is clear to see that she bears an uncanny resemblance to the Princess. As she approaches her 21st birthday she starts experiencing strange dreams about Tera in the past. Corbeck, one of the members of the expedition, is working to restore Tera to life and a new reign of terror, and with his help Margaret – under the influence of Tera – kills the other desecrators of Tera’s tomb one by one and brings the artifacts back to the makeshift tomb. Even Margaret’s boyfriend who tries to intervene gets killed in a car crash caused by Tera’s power. Corbeck, Margeret and her increasingly unhinged father start the ritual to awaken the princess. Professor Fuchs finally sees sense and convinces her to stop the ritual; together they overpower and kill Corbeck. Tera awakes, and in the attempt to stop Tera, the Professor is killed. After a long struggle, Margaret stabs Tera in the heart and she dies. In the end, Magaret wakes up from unconsciousness and finds herself in the hospital. Her whole body is wrapped in bandages and she is trying to say something.

Whew that was a long post. I’d have to say that the Mummy series pales in comparison with the Dracula series (even the bad ones). The first one from 1959 is excellent, with great performances by Lee & Cushing, and I give it a 9 outta 10! I give the second two movies a 5 outta 10 – the stories are very similar and the acting talent is at best passable. For the last one, the biggest draw is Miss Valerie Leon’s twin assets and man is she gorgeous! 6.5 outta 10! 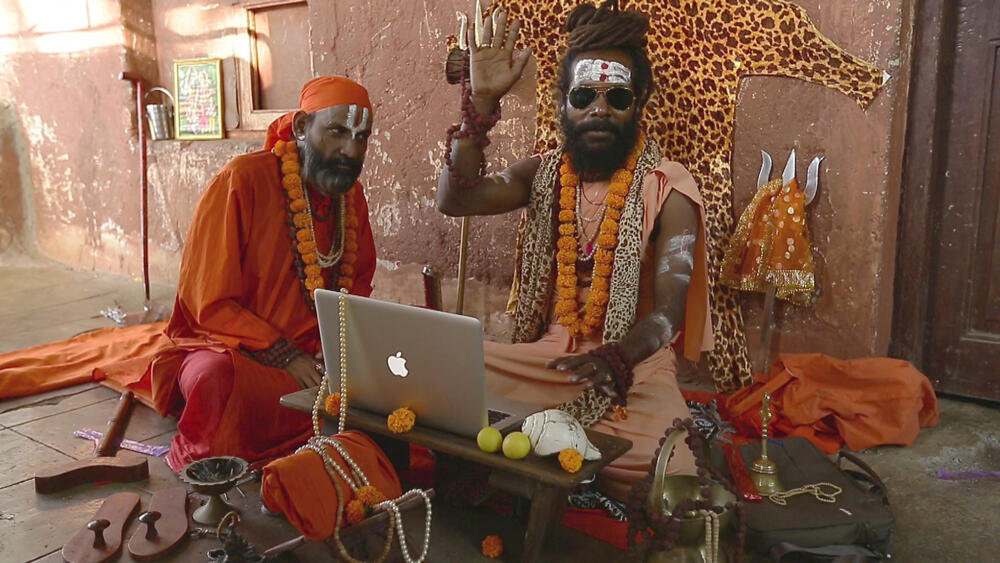 Apple comes out with two new products : iFraud which gives out iBullshit!