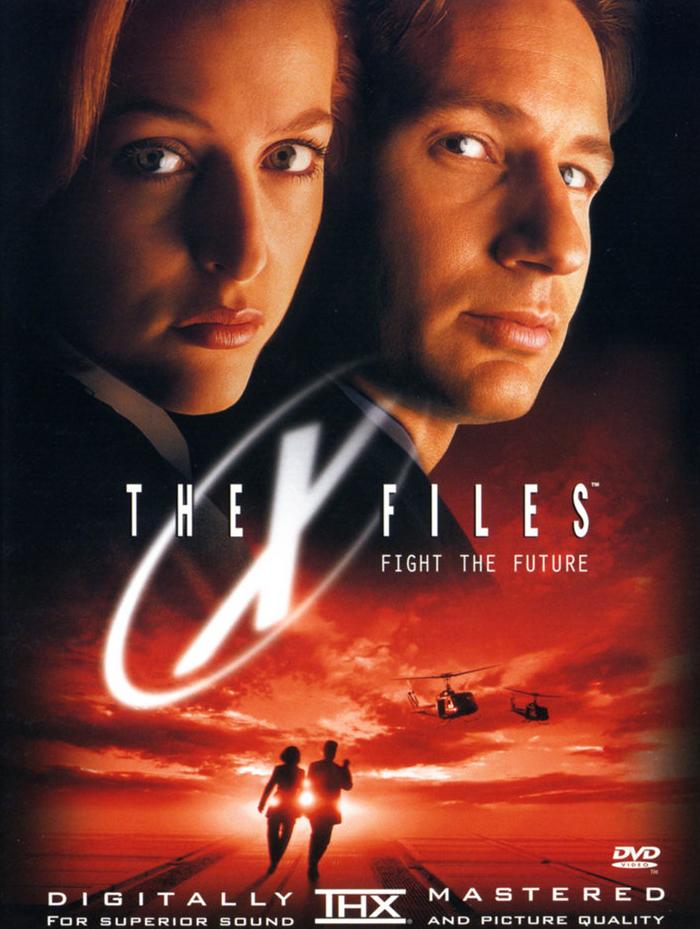 At the height of The X-Files popularity in 1998, right after season 5, the first movie was released. Titled The X-Files : Fight The Future the movie was actually shot before season 5 but the film’s story takes place between seasons 5 & 6, with events following season 5’s finale. Chris Carter decided to make a feature film to explore the show’s mythology on a wider scale, as well as appealing to non-fans. His original plan was to end the show at 5 seasons and do more movies based on the alien mythology but the network wanted more seasons and being one of the most popular shows of all time it made a lot more sense. Director Rob Bowman was at the helm with Carter & Daniel Sackheim co-producing the movie based on a script that Carter co-wrote with Frank Spotnitz.

The film starts off over 35,000 years ago in an area which will be called North Texas. A cave man enters a cave and runs into an extra terrestrial. They fight and the caveman wins, stabbing the creature to death, but he is also infected by a black oil-like substance. Fast forward to 1998 and a group of young boys playing in the same area find one of their group to have fallen down a hole in the ground. The boy finds a human skull and as he picks it up, the black oil seeps into his skin and up to his eyes, causing them to go black. Four firefighters descend into the hole to rescue him but do not come out and soon a team of biohazard-suited men arrives on the scene. Meanwhile Fox Mulder & Dana Scully are still recovering from the closure of the X-Files and assigned to other cases. Called to investigate a bomb threat in Dallas in the federal building in that area,  Mulder discovers the bomb in a vending machine. Special Agent in Charge Darius Michaud (Terry O’Quinn) stays behind to disarm the bomb as Mulder and Scully evacuate the building. Unknown to the agents, Michaud makes no effort to disarm the bomb, which detonates.

Back in DC, the duo are chastised by the superiors because, in addition to Michaud, five people were apparently still in the building during the bombing. A separate investigation is held but Mulder encounters a paranoid doctor, Alvin Kurtzweil (Martin Landau), who explains that the five victims were already dead, and that the bomb was allowed to detonate in order to destroy evidence of how they died. At the hospital morgue, Scully is able to examine one of the victims, finding evidence of an alien virus. Scully & Mulder head back to Texas to the scene of the crime and are led to a strange train hauling tanker trucks and they follow it to a large cornfield surrounding two glowing domes. They enter the domes, only to find them empty. Suddenly, grates leading to an underground area open in the floor and a swarm of bees chases the agents out into the cornfield. Once outside they are chased by helicopters and they barely manage to make their way out and head back to DC. With news of Scully being transferred to Utah, she & Mulder devastated at being separated are about to have a tender moment when Scully is stung by a beer that was lodged in her shirt collar and she looses consciousness.  Mulder calls for the paramedics but when an ambulance arrives, the driver shoots Mulder in the head and whisks Scully away. Waking up in hospital, Mulder is told the bullet only grazed his temple and leaves with the help of The Lone Gunmen.

With the aid of the Well Manicured man (John Neville) Mulder is able to track Scully’s location to a secret base in Antartica. The Well-Manicured Man is then killed in a car bomb, before his betrayal of The Syndicate is discovered, but not before he is able to pass along a vaccine to combat the virus that has infected her. In Antarctica Mulder discovers a secret underground laboratory run by the Cigarette Smoking Man and he uses the vaccine to revive Scully. But by doing so he also disrupts the stable environment of the lab and reviving the cocooned aliens who chase after the duo. Mulder manages to drag Scully out to safety and – the lab turns out to be part of a huge alien vessel lying dormant beneath the snow; the vessel pushes up through tons of ice and snow and travels straight up into the sky. Mulder watches the ship fly directly overhead and disappear into the distance, as Scully regains consciousness. Some time after she has recovered back in DC, it is clear to the duo that their investigation & testimony has been ignored but their partnership is no longer threatened to be dissolved. he only remaining proof of their ordeal is the bee that stung Scully, collected by the Lone Gunmen. At the end of the movie, we see the Cigarette Smoking Man in another crop outpost in Tunisia, getting a message that the X-Files has been reopened.

The movie is bound to be confusing to people who haven’t followed the alien mythology (if not the entire show) at least in the tv series so far. Even having done so, the movie is far less than satisfying and a bit of a mess. I’d give it a 7 outta 10!

Metallica play a heavy metal version of the Ennio Morricone composed instrumental Ecstasy Of Gold (from the movie The Good, The Bad & the Ugly) live in Copenhagen.