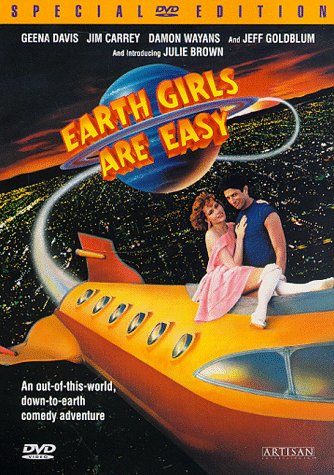 I love the 80s! The chicks with the crazy hair, the  outlandish clothes, lots of make up and the great music and the weird movies. This one has it all – Earth Girls Are Easy is a 1988 musical comedy with some science fiction thrown in for effect and they don’t take themselves seriously at all. Directed by Julien Temple it stars Geena Davis, Jeff Goldblum, Michael McKean,Julie Brown, Charles Rocket, Jim Carrey and Damon Wayans and is based off a 1984 song by Julie Brown. And also the movie is a semi-dig by Julie Brown against the whole “valley girl” & “Valleyspeak” thing from the 80s & 90s, directed at semi-affluent and affluent  middle-class  and  upper-middle class girls living in the early 1980s Los Angeles bedroom communities of San Fernando Valley.

Using a rather bad special effects section of a ridiculously colourful spaceship flying about in space we see our three furry friends Whiploc (Carrey), Zeebo (Wayans) & Mac (Goldblum) traveling around in space and when they see broadcasts for women in bikinis coming from earth they decided to head to our planet. Meanwhile valley girl manicurist Valarie, has just dumped her fiance Dr. Ted Gallagher after she caught him with another woman at their house. This just after Val had gone through a complete makeover to seduce him under the advice of her best friend Candy Pink at the beauty salon where they both work. Heartbroken she breaks a bunch of his stuff while going through a sad song. The next day Val is sunbathing next to her pool when the aliens spy her when their spaceship malfunctions due to an accident caused by Whiploc & Zeebo and it crashes in her pool. As Val investigates she bumps her head and the aliens take her in. When she comes to she is initially scared but soon befriends the furry aliens and she brings them inside her house.

Val calls her friend Woody (Michael McKean) to come and drain the pool so the aliens can work on their ship and get it flying again. Meanwhile she brings them into her home and though there is a language barrier at first, the aliens prove to be quick learners and absorb American culture and language by watching television. Later she takes them to Candy and they have the aliens shaved – they turn out to be human looking and attractive. Dressed in trendy clothes the girls take the 3 aliens to a happening nightclub where they attract many women with their good looks & long tongues – and Zeebo has a dance off with a top dancer as they both vie for the same babe. Mac, who is more intelligent had mastered English and talks with Val alone and sparks flies! Back home, the two find out that they are anatomically compatible and have sex. The next day the pool is drained and Zeebo and Wiploc are working on their ship when Woody stops by and offers to take them to the beach. They agree and after accidentally holding up a convenience store, Zeebo and Wiploc are soon driving down the LA Freeway the wrong way, in reverse, with the police in pursuit. Mac finds out his crew mates are in trouble and goes to help and gets arrested along with Woody in a case of mistaken identity. Valerie smashes the police vehicle in order to get arrested too so she can go with Mac.

Whiploc & Zeebo crash their car and the police take them to the hospital where Dr. Ted finds them. He was miffed at being chased out of the house the previous night, and examines them and is shocked to find out that they have two hearts each and is convinced that they are aliens. But Val & Mac sneek into the ER dressed as a doctor & a nurse and convince Ted that he is delusional. They then escape back to Valerie’s place where work continues on the space ship. Meanwhile Valerie and Dr. Gallagher reconcile and plan to go to Las Vegas to get married right away. A heartbroken Mac prepares to leave earth with Zeebo & Whiploc and as Valerie comes to say goodbye, Ted sees the spaceship and wants to alert the cops. While Valerie is struggling with her fiance to keep him from calling, she comes to the realization that it’s really Mac who she loves. She gets in the ship and off they head into space.

Funny, cheesy but a little fun and the ability to laugh at themselves. It makes me nostalgic for the 80s again. I first saw this movie bac in 1994 or so I’ll probably watch it again once in a while. 6.5 outta 10!