I don’t see a debate here – 6am is way better an hour of the day than any of the other. Over here it’s light but not too bright or sunny no matter when, except for the monsoon season. On the heavy rainy days waking up at 6 am takes a whole lot of will power and for the aged or the ill a whole lot of physical struggle as well. I would prefer waking up at 6am – I now wake up at 7am or 7:30 am on most days but waking up at 6 is a small adjustment. I used to wake up at 6 for an earlier job and did that for a really long time so it’s not a big deal.

Staying awake until late at night is quite difficult for me these day. I used to be able to stay away for much longer but I’m 37 now and I need more sleep for my now aging self. I have found that I sometimes tend to wake up early, like 4:30 – 5:30 am on some days and then can’t go back to sleep. That’s ok, I tend to lie in bed and read or watch some tv episodes that I have downloaded on my laptop or on dvd until 7 am and then go get some coffee. It is easier to do that. I might not be able to do that on a regular basis unless I go to bed at like 10:30 or 11 am at least but once a week or so it is ok.

My current routine is sleep at 12-1 am and wake up at 7am-7:30 am. This is suitable for me and I get enough sleep and rest (for the most part as long as I don’t wake up more than once during my sleep). I love waking up and going to get some coffee. Best part of the day! 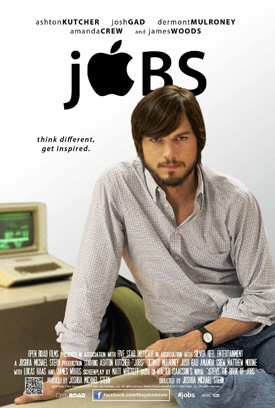 Jobs is a 2013 American biographical drama film based on the life of Steve Jobs, with Ashton Kutcher playing the role of Jobs. It is directed by Joshua Michael Stern, written by Matt Whiteley, and produced by Mark Hulme. Joining Kutcher is a solid cast including Josh Gad (as Steve Wozniak), Dermot Mulroney, Matthew Modine, Ron Eldard and Lukas Haas.

The movie starts off with the 2001 announcement & launch of the iPod by Steve Jobs at the Apple Town Hall meeting, and as the applause fades off we flash back to 1974 in Reed College with a young Steve having dropped out due to high tuition fees still auditing classes with the approval of Dean Jack Dudman (James Woods) who took him under his wing. His friend Daniel Kottke and Jobs head to India based on the influence of a book by an Indian spiritual guru and their experiences with LSD and spend some time there. Back in Los Altos, California, it is now 1976 with Steve living at home with his adoptive parents and working at Atari. After a disagreement with his fellow workers, Steve works on a solo project and builds a successful new game with some help from his friend Steve Wozniak. After seeing that Wozniak is working on building a personal computer (Apple I), the two join forces and start their own company called Apple Computers. After a rather dull presentation by Wozniak at a computer club, Steve is approached by Paul Terrell for a contract to make the computers. Jobs asks his mechanic/carpenter father Paul for permission to use the family garage (set up as a carpentry/tool center) for his new company. His father agrees and Jobs then adds Kottke, Bill Fernandez (Victor Rasuk), Bill Atkinson (Nelson Franklin), Chris Espinosa (Eddie Hassell), and later Rod Holt (Ron Eldard) to the Apple team to build Apple 1 computers. Terrell isn’t very happy with the result and Steve tries to get investment elsewhere. After hounding potential investors and making thousands of calls Mike Markkula (Dermot Mulroney) invests in the company which allows them to move forward.

Jobs & Wozniak develop the Apple II and launch it at the 1977 West Coast Computer Faire. The computer is a huge success and the company starts growing bigger. Steve begins to distance himself from his old life & friends such as Kottke (calling him a barely competent worker who can be easily replaced) and later his girlfriend Chris-Ann Brennan. The often quoted incident is shown her – with Jobs dumping her as she tells him that she is pregnant. Having had a long on again, off again relationship with her Jobs tells her that this is not the time (just as his company is taking off big) and refuses to accept that the baby could be his. Brennan eventually gives birth to Lisa Brennan-Jobs whom Jobs continued to deny is his daughter. He is also shown to be difficult & erratic, firing a employee for not appreciating his investment in using fonts). As the company grows bigger the board of directors feels that Steve isn’t mature enough for the CEO role so Steve brings in former Pepsi-Co president John Sculley (Matthew Modine) to take hold of the reins. Jobs is moved away from The Lisa to the Macintosh Group where he works with Bill Atkinson, Burrell Smith (Lenny Jacobson), Chris Espinosa, and Andy Hertzfeld (Elden Henson). He also forces the original team leader of the Macintosh group, Jef Raskin, out of it. Though the Macintosh is introduced with a great deal of fanfare in 1984, Jobs is forced out of the company by Sculley in 1985.

Forced out by the board and the man he brought in to be CEO Steve leaves and starts NeXT, marries Laurene Powell Jobs
and fathers 3 more children. By 1996 he has accepted Lisa as his daughter and she comes to live with Steve and his family. After Apple, who are struggling badly and buys out NeXT, CEO Gil Amelio asks Jobs to return to Apple as a consultant. Jobs visits the offices and interacts with some of the design teams and offers them suggestions. He later takes over as interim CEO and eventually fires Amelio and Markkula (who did not support him when he was forced out of Apple 11 years prior) and begins to reinvent Apple. The film ends with Jobs recording the dialogue for the Think Different commercial in 1997. Before the credits, there’s original photos of the main characters, including Steve Jobs, and also, the characters from the film.

Well made film and Kutcher does an excellent job. There are several issues with factual accuracies (as stated by the real people in Apple & Job’s life in interviews and press) but since I am neither an Apple fanboy nor a worshipper of Jobs, I can’t decide which ones to claim as true and which ones to claim as false. I was happy with the end result and will give it an 8 outta 10 based solely on what the movie is like and not facts and figures.