Set in the year 2154, the 22nd century sees a human race set into two classes: the very wealthy & affluent rich folk, who live on a luxurious Stanford torus-style space station called Elysium and catered to by robots, and the poor who live on an overpopulated, devastated Earth. While residents on Earth are policed by ruthless robots, Elysium’s citizens live in comfort in a paradise like artificially terraformed land and regularly use bed-sized medical devices called Med-Bays to keep them free of disease and injury. Our main setting on earth is a slum ridden dusty Los Angeles. Max Da Costa, who as a boy growing up in an orphanage dreamed about making it to Elysium and taking his best friend Frey along with him, is now a former car thief and parolee. He lives in the ruins of LA with hundred thousands of others and works in an assembly line for Armadyne Corp, the military company that supplies arms and weapons to Elysium. After a long separation he runs into Frey, now a nurse and a single mom. When Max is exposed to a lethal dose of radiation due to an accident at the plant he is left with only 5 days left to live. The only choice for him is to smuggle his way into Elysium and use a Med-Bay to treat him as the hospitals on earth are ill equipped.

Meanwhile when a caravan of illegal immigrants from Earth attempts to reach Elysium and its Med-Bays, Elysian Secretary of Defense Jessica Delacourt orders vicious mercenary Kruger to shoot down the shuttles. Disapproving of her methods, Elysian President Patel reprimands her and dismisses Kruger from service. Delacourt, vowing to protect Elysium and her own power, bargains with Armadyne’s CEO John Carlyle to write a program that can override Elysium’s central computer and make her President. Carlyle creates the program in his office on Earth and uploads it to his brain for safekeeping, encrypting it with a lethal denial system. Max taking the help of his friend Julio seeks help from notorious smuggler Spider agrees to get Max to Elysium only if he helps him steal valuable financial information from Carlyle, who is preparing to leave Earth. Recognizing Max’s weakened condition, Spider has his doctors implant Max with a powered exoskeleton, giving him superhuman strength, as well as an implant in his brain that can store computer data. Max, Julio and some men incept the ship and Max downloads the data (including the program) to his own brain. Tracking this, Delacourt sends Kruger to recover the program. In the ensuing firefight, all of Max’s allies are killed, Carlyle is mortally wounded, and an injured Max retreats to Frey’s house. While she treats him, Frey learns of Max’s intention to sneak into Elysium and begs him to take her daughter Mathilda, who is dying on cancer, with him but he refuses saying that it is too dangerous.

When Max returns to Spider to extract the information from his head and collect his reward, Spider deciphers Carlyle’s program and realizes it can be used to make all of Earth’s residents legal citizens of Elysium. However, searching for him, Delacourt has shutdown all air travel in the area, and using a grenade Max bargains with Kruger to be taken to Elysium, who has also captured Frey and Matilda as hostages, having tracked Max to the house. While the ship is in space a scuffled ensues and the grenade blast causes Kruger to lose most of his face and the ship crash lands on a suburb in Elysium. Frey and Matilda are arrested and taken to Delacourt, who has a team prepare to download the data from Max’s brain, while Kruger’s men take their severely-disfigured leader to the Armory. The extraction team discovers the encryption mechanism Carlyle has used, and they learn that downloading the data for use will kill Max. Delacourt coolly consents, and heads off to find Kruger’s team. Kruger’s men place him in a med-bed and his face is reconstructed. His first act after recovering is to stab Delacourt when she chastises him for his recklessness and dumps her in with Frey & an unconscious Mathilda. Planning to steal the program for himself to rule Elysium, Kruger has his men install a superior military-grade version of Max’s exoskeleton onto himself, and goes on a rampage through Elysium looking for Max, killing most the leaders.

Meanwhile, Max escapes from his confinement and frees Frey and Matilda. Realizing that Med-Bays only work for Elysian citizens, Max resolves to use Carlyle’s program to make everyone a citizen. Spider & his men have sneaked into Elysium just behind the crashed ship. As Frey, accompanied by Spider’s men, takes Mathilda to a house searching for a med-bed Spider & Max heads for the main computer core. On the way Kruger ambushes them and after a long fight, hurls Kruger over a ledge to his death. Spider and Max reach Elysium’s main data center where Spider realizes that activating the program will trigger Carlyle’s encryption and kill Max. Max, who already became aware of this, says a goodbye to Frey, then activates the program himself. As he dies, the computer core is rebooted, registering every Earth resident as a citizen of Elysium. President Patel finds himself deposes and the rebooted robots refuse to arrest Spider. A Med-Bay cures Matilda and, since a massive number of new citizens on Earth are now recognized by Elysium’s main computer as being in need of medical treatment, a fleet of medical ships are automatically dispatched to Earth to begin their work.

Although I feel that this movie could have done a lot better and finishes leaving a lot more to be answered – what’s going to happen to Elysium? Will all humans make their way there and wouldn’t that cause Elysium to also become overpopulated and finally succumb to the same problems as earth did?, etc etc – I still feel that the movie did justice to itself. 8 outta 10 and I wish Blomkamp will make more movies frequently! 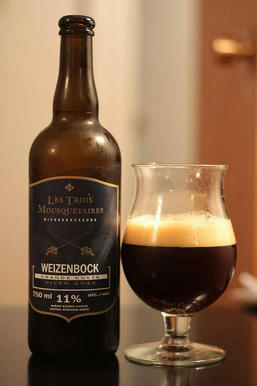 A Weizebock is more powerful Dunkel Weizen (of bock strength), with a pronounced estery alcohol character, perhaps some spiciness from this, and bolder and more complex malt characters of dark fruits. Moderate to strong phenols (usually clove) and fruity esters (usually banana). The balance and intensity of the phenol and ester components can vary but the best examples are reasonably balanced and fairly prominent. Optionally, a low to moderate vanilla character and/or low bubblegum notes may be present, but should not dominate. Noble hop character ranges from low to none. A light to moderate wheat aroma (which might be perceived as bready or grainy) may be present and is often accompanied by a caramel, bread crust, or richer malt aroma (e.g., from Vienna and/or Munich malt). Any malt character is supportive and does not overpower the yeast character. No diacetyl or DMS. A light tartness is optional but acceptable. Light copper to mahogany brown in color. A very thick, moussy, long-lasting off-white head is characteristic. The high protein content of wheat impairs clarity in this traditionally unfiltered style, although the level of haze is somewhat variable. The suspended yeast sediment (which should be roused before drinking) also contributes to the cloudiness.

Medium-light to medium-full body. The texture of wheat as well as yeast in suspension imparts the sensation of a fluffy, creamy fullness that may progress to a lighter finish, aided by moderate to high carbonation. The presence of Munich and/or Vienna malts also provide an additional sense of richness and fullness. Effervescent. Low to moderately strong banana and clove flavor. The balance and intensity of the phenol and ester components can vary but the best examples are reasonably balanced and fairly prominent. Optionally, a very light to moderate vanilla character and/or low bubblegum notes can accentuate the banana flavor, sweetness and roundness; neither should be dominant if present. The soft, somewhat bready or grainy flavor of wheat is complementary, as is a richer caramel and/or melanoidin character from Munich and/or Vienna malt. The malty richness can be low to medium-high, but shouldn’t overpower the yeast character. A roasted malt character is inappropriate. Hop flavor is very low to none, and hop bitterness is very low to low. A tart, citrusy character from yeast and high carbonation is sometimes present, but typically muted. Well rounded, flavorful, often somewhat sweet palate with a relatively dry finish. No diacetyl or DMS.

Old-fashioned Bavarian wheat beer was often dark. In the 1950s and 1960s, wheat beers did not have a youthful image, since most older people drank them for their health-giving qualities. Today, the lighter hefeweizen is more common. By German law, at least 50% of the grist must be malted wheat, although some versions use up to 70%; the remainder is usually Munich and/or Vienna malt. A traditional decoction mash gives the appropriate body without cloying sweetness. Weizen ale yeasts produce the typical spicy and fruity character, although extreme fermentation temperatures can affect the balance and produce off-flavors. A small amount of noble hops are used only for bitterness.