Returning to the topic of Cylons, in the re-imagine BSG we also have a version of cylons called as the Hybrids. During the end of the first war with the cylons  William Adama, then a Lieutenant & viper pilot, crashed on a planet during a battle with the Cylons and discovers a lab housing, in which the Cylon centurians were conducting experiments on live humans that led to the first hybrid – part machine, part humanoid cylon. The First Hybrid was protected by a sect of old Cylon Centurions called the “Guardians”. The Guardians took off with him in a prototype basestar just before the Armistice was signed and got away with him. He claimed to have the gift of prophecy and is far more lucid than newer models. However, this hybrid was considered to be a failure and most cylons aren’t aware of them other than just legends. This hybrid, the only male model, was destroyed when Major Kendra Shaw detonated a a nuclear device while on the basestar.

The later hybrids were all female (played by the same actress) part-biological, part-machine and control all internal functions of their respective basestar’s central computer system. The biological part of the Hybrid is a female humanoid Cylon-like being, housed inside an immersion tank similar to a Cylon re-birthing tank and attached to the mechanical part of the Basestar computers by umbilicals. The Hybrids do not have a completely human body, but rather appear to be more like cyborgs, consisting of conduits and other connectors mated to, or in place of elements of their bodies. The Hybrid is not one of the “twelve models” of humanoid Cylon, but is a separate model that is essentially another stage in “evolution” from fully mechanical Centurion, to partially biomechanical Raider, to humanoid Cylon. Hybrids manage the autonomic functions of the Basestar, including navigation and FTL jumps, climate control, and the like. The extent to which a given Hybrid is integrated into its Basestar means that, for all practical purposes, they are the Basestar. The Hybrid is revealed to be capable of having its own opinions and thoughts, but does not have a say in decisions made by the humanoid Cylon models. The humanoid Cylon models control the Basestar via “Data-Font” in the Basestar’s Control Room that are made up of a red flowing substance that seems to take the commands to the Hybrid itself. 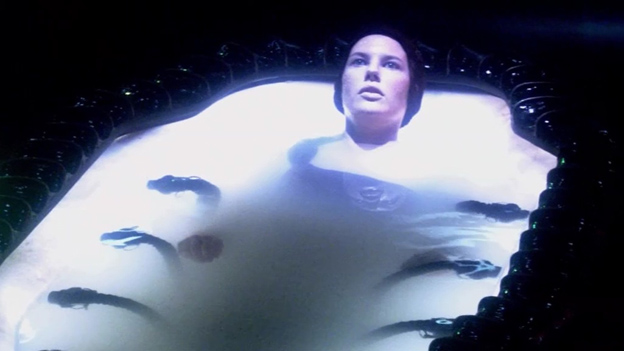 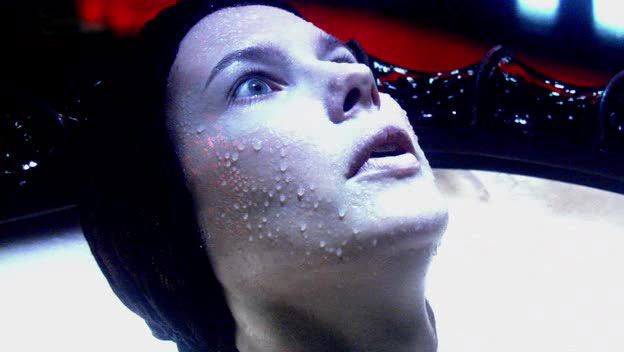 The hybrids speak strange, seemingly random phrases, which the humanoid cylons consider to be incoherent babbling of a deranged mind and only the # 2 series (Leoben Conoy model) model of Cylons believe that every word the Hybrid speaks means something, and that the Cylon god speaks through the Hybrids. he Caprica Model Six Cylon, however, has given an alternate explanation: the Hybrids do not perceive their existence in the same way as normal beings. They possess an expanded awareness of being one entity existing in space as well as perceiving all activity in their basestar’s interior.The Hybrid may also express the state of the ship physically, as demonstrated when one has a physical reaction during an FTL jump, similar to an orgasm. The Centurions developed the Hybrids on their own while attempting to evolve, but nothing that could live independently. They agreed to cease the war with humanity in exchange for the Final Five building them fully humanoid Cylons with the ability to resurrect.

I love this term, scared shitless! I use this term a lot to describe a good horror flick/story or other people’s experiences with a horror based situation. But how did this term come about?

When you think about it, it does make sense. You are so scared that even one of the basic bodily functions, of passing shit, is not possible. It’s like your body has frozen that it can bring it self to push and shit. Or atleast the shit has frozen solid due to fear (you normally associate fear with cold, right?) and can not come out.

But on the other hand….when a person is faced with something that frightens them a lot, they usually lose control of bodily functions. How many times have you heard or seen someone wet their pants when they are frightened so much? So shouldn’t that be the case in case of poo? Should they also poop their pants when extremely scared?

Or is scared shitless mean that you pooped out everything in fear and are now shitless as there is, literally, no more poop in you? I’m confused!