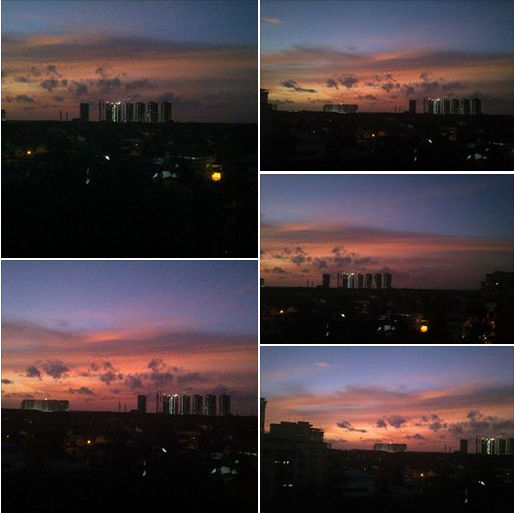 Ah, sunset. You are more beautiful & expansive than my humble 5mp camera on my phone can ever capture. Mother nature, Earth, universe – I am but a tiny dust in the wind in the billions of years post the big bang and cannot even begin to describe the grand vastness & awesome of the universe. But one thing is for sure – I will never insult you by crediting all this wonderfulness to some non-existent, insolent deity or deities in the sky who is/are too incompetent & impotent to create anything at all!

All photos were taken on my BlackBerry Bold 9870’s 5 mega pixel camera this evening about a quarter to 7pm.

A vlog by Zaranyzerak made me want to check out the 3 Columbia Pictures films featuring the adventures of Sinbad the sailor that Ray Harryhausen conceptualized and animated. Spanning 2 decades American visual effects creator, writer, and producer Harryhausen who created a form of stop-motion model animation known as “Dynamation”, helped make the 3 fantasy adventure movies based on the legend of Sinbad the Persian fictional hero. I watched all 3 of the films recently (I remember seeing atleast 2 of them long, long ago but it’s way too long for me to remember much of it).

The 7th Voyage Of Sinbad is not based solely on the story of the same name and came out in 1958. Starring Kerwin Matthews stars as the legendary Sinbad who while being lost at sea with his men, find an island where they can stock their dwindling supplies. Sinbad and his men also run into Sokurah the magician who is running away from an attacking cyclops as he has taken away a magical lamp from the hoards of treasure that the cyclops have socked from ships that have sunk in the area. Sokurah is able to summon the genie in the lamp (in the form of a young boy) to create an invisible barrier to help the sailor escape the rampaging cyclops but drops the lamp in the sea after the cyclops throws a boulder at their boat. They make their way to the ship and set sail to Bagdad despite Sokurah offering Sinbad and his men a chance to get at the treasure if they can return for the lamp, which the cyclops picks up and takes it back to it’s lair. Sinbad also has princess Parisa from the kingdom of Chandra with him and they are to be married; their union who cement the ties between Bagdad & Chandra. The caliph of Bagdad allows Sokurah to entertain at the function a day before the wedding but refuses to give the magician a ship & men to go back to the island as it is too dangerous.

At the end of his performance Sokurah claims of prophecies that the two kingdoms will have war and bloodshed which angers the caliph who banishes the magician from his land. However that night Sokurah secretly shrinks Parisa to the size of a hand and when she is discovered the  next morning, her father threatens war against Bagdad. Sinbad rushes to find Sokurah who claims he knows of a potion that can restore Parisa, but it requires a piece of the eggshell of a roc, a giant, two-headed bird that coincidentally nests on the peaks of Colossa. The Caliph has no choice but to provide a ship. Sinbad enlists his loyal men from the previous voyage, but they are not enough and Sinbad is forced to recruit inmates from the Caliph’s prison. On the journey the prisoners attack and take over the ship but they are driven mad by the sound of demons of the sea and Sinbad,the magician and his men are able to escape to the island where they are capture by the cyclops. A shrunken Parisa is able to help free the men from their cage by pushing the latch and Sinbad is able to blind the cyclops with a torch and leads it off a cliff to its death. Still needing Sokurah to guide him, Sinbad takes possession of the lamp. Parisa enters the lamp and finds the unhappy boy genie who longs to be free and she befriends him, promising to help him if he helps them. He shows her an inscription inside the lamp of how he can be freed and tells her the words to summon him in return for her promise to free him.

The men are attacked by the mother rock after they break an egg and Sinbad is knocked unconscious. Sokorah takes Parisa to a underground fortress, followed later by Sinbad with the help of the genie. Once found, the magician agrees to restore Parisa to her normal size in return for the lamp. However, Sinbad then refuses to give him the lamp until they get back to the ship, so Sokurah brings to life a skeleton swordsman to challenge him. Sinbad destroys the skeleton and he & the Princess flee across over a river of molten lava. Parisa throws the lamp into the lava to free the genie from his captivity. As the leave the cave another cyclops attacks them, causing Sinbad to free a dragon that was tied up and it kills the one eyed giant. Sokurah however commands the dragon to kill Sinbad and his men, who fire a giant crossbow that they had prepared and slay the dragon which falls and crushes the magician underneath it. Triumphant Sinbad returns to Bagdad with a restored Parisa and the genie, who has been made a cabin boy by Sinbad, and some of the treasure in their ship.

A fun movie with some awesome groundbreaking, for it’s time, special effects & creature effects. We’ve come a long way from 1958 but it’s never too long to appreciate the pioneers. 7 outta 10!

For my 6th food review my cousin Sujith & I went to SFC Plus on Marine Drive to try out the Chicken Hawaiian Pizza. It has pineapple, fried chicken, SFC Plus style chicken, mushrooms, jalapenos and mozarella cheese in all it’s ooey gooey deliciousness. It was excellent and I now have a new favourite pizza at SFC Plus. I’d rate it a 9.5 outta 10!