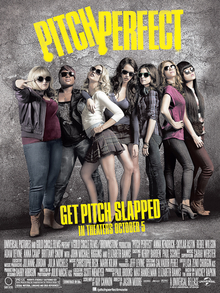 The Bellas come in third in the competition behind the Treblemakers and the Footnotes. When the Footnotes are later disqualified from the national competition because the lead singer was in high school, the Bellas are called to take part instead. The Bellas reform after spring break, with the notable exception of Beca. During rehearsals, Chloe stands up against Aubrey’s stubbornness. The group starts to fall apart, which sparks a fight. Beca tries to makes up with Jesse but he declines as his feelings were hurt. Beca goes back to the Bellas and apologizes and they hash it out after some hilarious stuff! More receptive to changing things up, Aubrey asks Beca to lead them and they rehearse some newer material. Meanwhile, group leader Bumper leaves the Treblemakers after being offered a job as a back-up singer for John Mayer. With Bumper gone, Jesse persuades the Trebles to let his previously-rejected roommate Benji join the group in Bumper’s place. At the finals, after the Treblemakers wows the crowd, the Bellas come on stage in different outfits and a different medley which includes a song from Jesse’s favourite movie and he is thrilled. The Bellas end up winning and Jesse & Beca kiss at the end of the competition.

In one of the worst displays of blowing a lead, Arsenal let slip a commanding 3-0 lead at home against Belgian champions Anderlecht  to draw 3-3. At the 60th minute the Gunners were looking dominant and their attack was glistening with power. Mikel Arteta’s penalty put the Gunners ahead after Danny Welbeck was fouled by Chancel Mbemba. Alexis Sanchez doubled the lead with a stunning 20-yard volley before Alex Oxlade-Chamberlain added the third after a superb run in the second half. That should have been it. That was all that was needed but you know what a 4th goal would have been nice. But you know what? It all came tumbling down like a house of cards in a gust of wind.

Arsenal’s bane in recent memory has been their lack of defensive cover and the need for a strong defensive holding midfielder who can bulk up the middle. And yet again that was what cost us precious points. Anthony Vanden Borre, who was terrible defensively for his team, reduced the deficit from close range but was clearly offside. However this slipped both the linesman (he was right there, how the hell did he miss it?) and the referee’s attention. Then Monreal, who was praised for his last couple of performances substituting in central defence in the absence of Koscielny was the guilty party in conceding a penalty and Vanden Borre stepped up to score it. The lapses were showing. Wenger brought on Lukas Podolski & Tomas Rosicky in the 81st minute to add fresh legs and speed to press on and perhaps create a goal scoring chance or two but to no avail. Arsenal were still set to book their place in the knockout stages when the inevitable happned substitute Mitrovic headed Andy Najar’s 90th-minute cross past Wojciech Szczesny from close range. Per Mertesacker the guilty one here in not being able to do enough to throw the pesky one off track.

Though Vanden Borre was clearly offside when he scored his first goal, there can be no excuses for the lapses of concentration that allowed the Belgian champions to take a point. The Londoners still need one point from their two remaining games – at home to Borussia Dortmund on 26 November and at Galatasaray on 9 December – to advance. But with Dortmund five points clear, their hopes of finishing top of the group and heading into next month’s draw as one of the seeded teams are fading. Wenger was furious at the end but look no further than the reflection in your mirror Arsene. And he stated in the post-game press conference, when asked whether he planned to strengthen his defence in the January transfer window, “Honestly it’s not the worry tonight”. This guy has lost the plot!

The Rascalas pay tribute to the South Of India channeling Billy Joel’s Chartbuster We Didn’t Start the Fire.