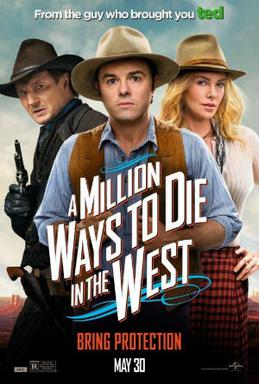 It’s 1882 in the wild west town of Old Stump, Arizona and sheep farmer Albert Stark manages to talk himself out of a duel by promising to sell a couple of his sheep and compensate the angry gunslinger who’s property was damaged by them. Albert’s girlfriend Louise, who says she needs to be by herself for a while but she soon shacks up with the mustached & rich businessman Foy. Albert tells his best friend Edward and his prostitute girlfriend Ruth that there is nothing left for him in Old Stump and he is planning to go to San Francisco. Meanwhile infamous outlaw Clinch Leatherwood heads near the town and kills an old man for his old. Clinch sends his wife Anna, who wants out, along with one of his henchmen Lewis to lay low in town as the rest of the continue their looting ways. Anna takes in the old man’s dog and goes into town with Lewis, pretending to be siblings looking to setup a farm.

The next evening Lewis gets into a fight in the saloon and in the ensuing fight much property is destroyed. Albert saves Anna from falling  brawlers and they hit it off. The two of them smoke a joint and begin a friendship. The next day at a fair Foy challenges Albert to a shooting contest and the latter is is defeated, but Anna steps up and defeats Foy. Foy insults Albert who angrily challenges Foy to a duel in a week’s time. Anna spends the next few days teaching Albert how to shoot better and he improves a bit. At a formal dance, after Foy manages to insult Albert again, Anna slips some laxative drug into Foy’s drink before they leave. As Albert & Anna share more bonding moments they kiss at the end of the night, which is seen by Lewis who had escaped from jail by beating the sheriff. The next morning Foy is tired and unable to stand properly and has to shit into two hats right in front of the crowd. Albert decides that Louise isn’t worth the fight and forfeits the duel. However Lewis has told Clinch about seeing a man kissing Anna and the bandits come into the bar and demand that that man who kissed Anna show himself by the next day at noon and kills a man as a warning. The bandits head out and Clinch proceeds to have sex with Anna in a secluded spot but she knocks him out with a rock and leaves him on the grass with a flower sticking in his ass.

Anna finds Albert at his family farm preparing to leave and he confronts her for not telling him she was married and that to to the most notorious outlaw around. She tells him that this life of being an outlaw’s wife wasn’t what she wanted and that she rally loves Albert. Clinch and his men reach the farm and apprehend Anna but Albert escapes by first hiding among his sheep and the jumping onto a train with his horse. Deep in the desert he is captured by natives who prepare to burn him at the stake but he pleads for his life in their language which the chief likes and hence they release him. They give him a bowl of peyote, which sends him flashing back to his birth and through traumatic events of his childhood before making him realize that he loves Anna. At noon he shows up in town to face Clinch and shoots first, wounding Clinch with a snake venom lace bullet which kills the man – before Albert could finish telling his clever plan. Anna breaks loose from the outlaws who are taken in by the law. Louise attempts to win back Albert, but he rejects her and instead enters a relationship with Anna. Albert also receives a bounty for killing Clinch and uses the money to buy more sheep.

Funny as hell with a lot of raunchy humour, dirty jokes, sex jokes and fart and poop stuff and lots of physical comedy too. I can understand that not everyone will like this kind of humour in a film as it’s a film that does not appeal to all audiences. Hence on a budget of $40 million it only made about twice that much, which is considered a moderate success. I however enjoyed every bit of it, farts and all. 8 outta 10! I will enjoy this film a few times over the next years.

The 4th & final video of our big meal in Golden Dragon (a Chinese restaurant chain) – the one in Ravipuram. Our main course was Shanghai Emerald fried rice, Szechuan mixed fried rice with Mongolian beef & pork in hoisin sauce.