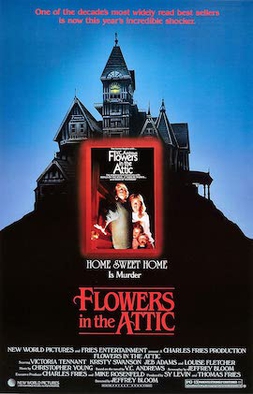 A movie that (I remembered very little of it) I had watched in my cousins’ house back in 1989. Flowers In The Attic is a 1987 film starring Louise Fletcher, Victoria Tennant, Kristy Swanson, and Jeb Stuart Adams and based on the 1979 novel of the same name by V. C. Andrews. Directed by Jeffrey Bloom & produced by Sy Levin & Thomas Fries, the incest story is toned down in the final cut of the film.

The Dollanganger family – mother Corrine, teenagers Chris & Cathy and 5 year twins Cory & Carrie – are devastated when their doting father is killed on his 35th birthday in a car crash. He left the family with a heavy debt and Corrine is forced to sell most of their belongings and finally the house. Broke, she takes her kids with her to her wealthy parents’ huge estate. She tells the kids that the reason they never saw their grandparents till now was because of something that she did many years ago and that her father was upset with her. After a long journey they reach the estate and Corrinne’s religious fanatic mother Olivia takes them in, with the condition that the children are to be locked in a bedroom on the top floor and that her husband Malcolm not know of their existence. Olivia & Corrine leave the children in the locked room.

Later Olivia reveals the shocking truth to the kids; their father was Corrine’s uncle and Malcolm’s much younger brother making the children products of an incestuous marriage. As penance for her incestuous relationship, Corrinne was whipped by Olivia in front of a bedridden Malcolm. Corinne tells the children that their confinement will only be for a short time: her father is deathly ill, and once she is able to win back his love, he will write her back in his will, giving her a large inheritance and they will be free when he dies. The children are given access to the attic, which has a secret door through the closet in their room, which they clean up and make it a garden/playroom and where they spend most of their time. Olivia has John the butler bring the children their food on a daily basis but Corrinne’s visist become sporadic as the weeks turn into months and finally she stops coming. Olivia becomes obsessed with Chris & Cathy thinking that they will become lovers, when she finds them sleeping in the same bed one morning and another time when she finds Chris talking with Cathy as the latter is bathing in the tub. The grandmother smashes Cathy’s ballerina music box, given to her by her deceased father and calls then sinners. Chris chases her out the second time but she later catches Cathy alone and cuts of most of her hair.

Olivia them starves the children for a week who become ill without food and their skin becomes pale. Cory is the worst off and Chris is forced to feed him his blood to keep him alive. When Corrinne finally shows up with gifts, dressed in the finest and looking healthy and well fed, and says that her father has forgiven her and is planning a party for her, after which he plans to change his will. As Cathy lashes out at her and Chris questions her long absence their mother gets upset and says that she won’t return to see them until they apologize. The food starts coming back but the kids are still sick. Chris & Cathy remove the door secretly from it’s hinges and sneak off to see the party, watching their mother dancing with a man and being given a ring by him. They also find her bedroom which is lavish & luxurious with a giant wardrobe. They try to escape at night but find guard dogs loose in the grounds. Cory becomes too sick to move and the children ask Olivia and Corinne to take Cory to the hospital during an argument in which Corrinne & Cathy slap each other. Cory is taken to a hospital but later Corinne returns to inform them he has died.

The devastated children learn that Cory’s pet mouse has died after eating a cookie from their breakfast tray and Chris does research using books from the attic library and comes to the conclusion that their are being poisoned using arsenic mixed with sugar on the cookies. That night sneaks out to steal some money and overhears the plans for a wedding – between Corrinne and the man she was dancing with – to be held in the mansion the next day. The next morning the remaining 3 children dress in fancier clothes found in the attic and, on finding Olivia sneaking into their room, Chris beats her unconscious with a broken bedpost. They then find out that their grandfather has been dead for over 2 months and find a copy of his will in which he had left all his wealth to Corrinne; however a clause states that if it is ever revealed Corinne had children from her first marriage, she will be disinherited and lose all of her money. They realize that Corinne was the one poisoning the cookies, not their grandmother. They kids crash the wedding revealing their mother’s actions to everyone there. Corrinne denies that they are her children but the damage is done.

As Cathy confronts her mother about poisoning them and killing Cory in the process, she tries to make her eat some of the poisoned cookie, Corrinne stumbles out to the balcony and trips and falls to her death, strangled by her own wedding gown caught on the side of the house. The children then leave the estate watched by their grandmother who glares at them from a window. The narrator (an older Cathy’s voice) says that the children did manage to survive all by themselves although Carrie was “never truly healthy”. She wonders aloud if her grandmother is still alive, anticipating Cathy’s eventual return to claim the family’s fortune.

Interesting movie with a unique story, some sadness and melancholy and a bit of psychological horror. The incestuous relationship between Chris & Cathy is toned down for the film (in the book they fall in love during the 2 years they spend in the house and Chris angrily rapes her at one point). There’s even a jealously angle hinted in the beginning as the father clearly favours Cathy and when she hugs him closely on getting a gift, Corrinne is seen watching them from behind a door. I see that movie was successful but was panned by critics and fans of the novel. I still like it though it is quite dull in places. 7 outta 10!

Finally, something positive. Arsenal procured their passage to the knock-out stages of the Champions League with a 2-0 win at the Emirates against Dortmund. Yaya Sanogo, starting only because Danny Wellbeck was injured, scored his first goal for Arsenal as they defeated Borussia Dortmund and ensured their passage into the Champions League knockout stage. The 21-year-old netted after 19 appearances without a goal when he finished off a one-two with Santi Cazorla with a low shot early on. Alexis Sanchez made it 2-0 after the break with a superb low curling shot. Sanchez also had a shot pushed away, while Alex Oxlade-Chamberlain struck the crossbar with a dipping volley.

That the first goal was scored by a player who was the source of some ridicule on social media when the teams were announced before the match. Sanogo’s ungainly style has irked some fans and there was further astonishment when he was named ahead of Germany World Cup winner Lukas Podolski. But he finally managed to temper some of that criticism when he converted his first effort after starting the move with a ball-juggle and backheel to Spaniard Cazorla. However of much concern is that he and Arteta both had to leave the match injured. Major concern I might add as ou players keep getting injured every other game. Wellbeck, Walcott, Wilshere, Szcz?sny – not to mention Debuchy & Ozil who have been out for a while and with Koscielny & Giroud just coming back from long weeks out! What the fuck!

Goalkeeper Martinez was finally forced to make a big save in stoppage time when he dived to keep out substitute Adrian Ramos’s effort. The win moves Arsenal to 10 points in Group D and a victory over Galatasaray coupled with Dortmund losing to Anderlecht in the final round of games would see Wenger’s side go through as winners. Monreal, Chambers, Gibbs, Arteta & Chamberline had good performances and it was fun to see. Can we build on this? Can we go on and win more games and go something this season? I dunno. One win is not going to change my mind on Wenger. He still has got to go.