With money being tight going out on a regular basis or even on a semi-regular basis is not really that possible. So for the weekend I have to make due with a budget so I can enjoy myself while I watch some football or movies in the comfort of my bedroom. So I went out to the store this evening and made a few purchases. For today evening I had a packet of cream biscuits – the cream was Vanilla and the cookie part was chocolate – along with my coffee. Dinner was the tried & tested masala instant noodles a la Maggi with 2 duck’s eggs that I scrambled and mixed with it. And ketchup. I had a 600 ml of Pepsi to wash down dinner.

Later on tonight at 11 pm I will be watching some football which will start at around 11pm. If I am not too sleepy once the game is done, I might watch an episode or two of  one of my favourite tv shows. Tomorrow will be an easy & simple day, some coffee and a light breakfast. Post lunch, which will be the usual rice, veggies and a curry, I will have some more biscuits with spicy & tangy peanuts for the evening while I watch either more football or a movie or two! Simple stuff and that is weekend enjoyment on a tight budget. 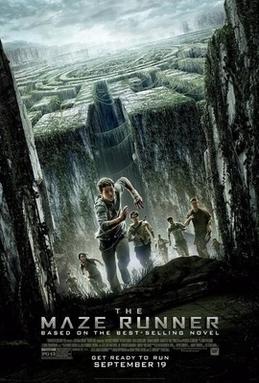 Based on James Dashner’s 2009 novel of the same name, The Maze Runner is a 2014 American science fiction dystopian action thriller film directed by Wes Ball. The film, which is one of the latest in the spurt of  young adult themed semi-scifi kinda fiction, is the first installment in The Maze Runner film series and was produced by Ellen Goldsmith-Vein, Wyck Godfrey, Marty Bowen, and Lee Stollman with a screenplay by Noah Oppenheim, Grant Pierce Myers, and T.S. Nowlin. The film stars Dylan O’Brien, Kaya Scodelario, Thomas Brodie-Sangster, Will Poulter, and Ki Hong Lee.

A teenage boy wakes up inside a rusty elevator that has come up from several levels below and is greeted by several other unfamiliar boys on a grassy enclave.  He makes a run from them but finds that the clearing, called The Glade, is surrounded by huge stone walls. The boy has no memory of who he is and how or where he came from but the leader of the group of all boys, Albi, says that he will remember his name in a little while. The boys all work and survive together in a sort of community and the boy is befriended by the second in command Newt, who shows him the work in the garden, and a chubby younger boy called Chuck. All the boys came up to the surface in the same way, one at a time every 30 days, without their memory and only remembers their name after a couple of days. The boy wonders what is beyond the opening in the wall adjacent to the Glade, but he is warned not to go through there, being that it is a maze. Newt, second in command and gardener, explains that the Maze is the only way out. The most able boys become Runners, who are the only ones allowed into the Maze. They search for an escape route during the day, but return before nightfall, since the Maze entrance closes at dusk, and no one has ever survived a night in the Maze.

That night at a bonfire party the boy remembers his name, Thomas, after a brief fight with Gally, one of the stronger boy. The next day Thomas is attacked by Ben, who has been stung by a griver, one of the deadly part organic-part robotic creature that prowls the Maze at night and the other boys capture him and banish him into the Maze, forcing Ben inside it as the walls close. The next day Minho, the leader of the runners and Albi go into the Maze to retrace Ben’s path but Alby is stung and rendered unconscious. Minho appears at dusk, dragging Alby towards, but is unable to reach the entrance in time. Seeing this, Thomas runs into the maze to try and help. All three boys survive the night, with Thomas successfully killing a Griever by tricking it into running into a closing wall, crushing the Griever, and they return the next day with Alby to the astonishment of the other boys. Gally fears that the peace between the Grivers and the boys will come to an end, wants to punish Thomas by banishing him into the Maze but Newt overrules him and makes Thomas a runner. The next morning a few of the runners with Thomas & Minho go into the Maze and find the corpse of the Griver and retrieve a mechanial part which has an LCD display with the number 7 on it, corresponding a certain section of the maze.

The next morning the very first girl is sent up via the elevator with two syringes of a medical substance and a note that reads that she is the final person to be sent. The girl, Teresa knows Thomas but he does not remember her. The boys use one of the syringes on Alby and he starts to recover. Minho shows Thomas a model of the Maze he has created with all the data they collected during the last 3 years and the two of them go back in discovering an escape route. They barely make it back after being forced to retreat by collapsing sections, and inform the others. That night the Grivers attack killing some of the boys including Albi. Thomas stabs himself in the leg with a severed sting and remembers that he and Teresa were part of the organization that created the Maze, and that all of this was a test, and not imprisonment as they all were supposing so. Gally blames Thomas and Teresa for everything and attempts to execute them. The Gladers stop him, and most of them follow Thomas through the maze’s escape route. They battle the Grivers losing a couple of the boys along the way and using the pattern in which the Maze sections open up every day, which Minho has memorized, unlock a password locked door behind which they find a lab with a lot of dead scientists lying about.

A video plays in which a woman explains that the earth has been devastated by solar flares and a pandemic, The youths in the Glade were all part of an experiment researching their apparent resistance to the pandemic. At the end of the recording, she shoots herself in the head as the lab is attacked. Gally then shows up with a gun he found and shoots at Thomas but Chuck jumps in the way and is killed while Minho kills Gally using a spear. Armed masked men rush in to take the group away to a helicopter and fly them over the walls and reveals a vast desert and they approach the ruins of a destroyed city. In the final scene the scientists, all alive having faked the scene in the lab, sit at a table and the woman states that the experiment has been a success, the group havingbought the bait, and the survivors are now entering Phase Two.

Not bad as far as the young adult films goes (I have no idea how the books are) and there is very little cliched stuff in it. The execution is good and I think the actors chosen did a commendable job. I’m not fully convinced though as we don’t too much of an explanation but seeing as this is the first of a series of films that negates some of it. I’d have to say this is a 7.5 outta 10!