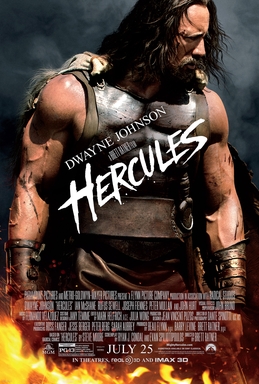 Hercules is a 2014 directed by Brett Ratner and starring Dwayne Johnson, Ian McShane, Reece Ritchie, Ingrid Bolsø Berdal, Joseph Fiennes, and John Hurt. Much like in the view of the recent spate of Greek legend movies with a lot of liberties taken. This is one of two Hercules themed movies that was released this year and the latest of Hercules themed movies that I can remember.

Hercules is a wizened warrior and leader of a band of mercenaries that consists of the spear-wielding prophet Amphiaraus of Argos, the knife-throwing thief Autolycus of Sparta, the feral warrior Tydeus of Thebes, the Amazon archer Atalanta of Scythia and his nephew storyteller Iolaus of Athens. Iolaus recounts the legend of Hercules who was born to a human woman after she was impregnated by the might god Zeus and who completed the 12 labours to appease Zeus’s wife the goddess Hera. However the story goes that he went insane and murdered his wife & 3 children during a visit to King Eurystheus, after being betrayed by Hera. He was banished by the king but continued to show displays of great strength and skill in combat. Hercules is frequently haunted by the memory of the deaths of his wife and daughters by his hand, as well as visions of Cerberus. After a mission, Hercules and his group are celebrating at a tavern when Ergenia, daughter of Lord Cotys Hercules to train the armies of Thrace to defend the kingdom from bloodthirsty warlord Rheseus. Hercules accepts after he is promised his weight in gold if successful.

After training the army, which is usually led by General Sitacles, Hercules and his men lead them into battle against local barbarians as a test of their strength. After the barbarians are defeated, Hercules and Sitacles confront Rheseus and his soldiers. Rheseus is defeated and taken back to Thrace as a prisoner, where he is tortured and humiliated. However back in Thrace, Rheseus informs Hercules that regarding actions of burning down villages, it was not him or his army, and tells Hercules that he has been fighting on the wrong side. In the palace during a celebratory feast Ergenia takes pity on Rheseus Hercules confronts her and finds out Rheseus was telling the truth in that he was merely retaliating against Lord Cotys’s aggressive attempts to expand his kingdom, and, although Ergenia doesn’t agree with his methods, she goes along with them for the sake of her son, Arius, Lord Cotys’s successor to the throne, who is being threatened by Cotys. Hercules confronts Cotys and has to be restrained by Autolycus. The group gets their gold and prepare to leave but Hercules wants to stay back and correct things.

All but Autolycus choose to follow him but they are overpowered and captured by Sitacles and his men. While chained, Hercules is confronted by King Eurystheus, who is in league with Lord Cotys, and reveals that he drugged Hercules the night his family died, viewing him as a threat to his power. Hercules’s family was in fact killed by 3 vicious wolves that Eurystheus sent, resulting in Hercules’s constant hallucinations of Cerberus. Lord Cotys orders Ergenia to also be executed for her betrayal and Hercules, encouraged by Amphiaraus to become the legend that people know him to be. Summoning inhuman strength, Hercules breaks free of his chains, saving Ergenia and slaying the 3 wolves with his bare hands. Hercules releases the prisoners, including Rheseus, and then confronts King Eurystheus, impaling him with his own dagger. He is attacked by Sitacles, who is then stabbed by Iolaus. Outside Arius is taken hostage, but then rescued by Autolycus, who has decided to return to help his friends.

In the ensuing battle, Tydeus is mortally wounded while protecting Arius, but fights on slaughtering numerous Thracian soldiers. Hercules again uses inhuman strength and pushes a massive statue of Hera from its foundations and uses it to crush Lord Cotys and many of his soldiers. After this show, the remaining soldiers bow down to Hercules, believing the legend of the demigod. Later Arius takes the throne, with Ergenia at his side, while Hercules and his men depart in search of other adventures.

And perhaps more movies to follow. Good enough film for an afternoon’s fun. It’s entertaining and the creature effects are done well as is the production. 7.5 outta 10!