You’re given a plot of land and have the financial resources to do what you please. What’s the plan?

Hmmm, I’ve always wanted to own my own place of business. Like a bar or restaurant. Maybe a pizzeria! Roshan’s Pizza Palace! A lot of variations of the much loved pizza with originality and creativity. A bar would be great with lots of imported beer on tap as well as amazing brands of liquor.

I would also like to start something that deals with dogs & cats and their care. How about something to do with music? Like a large guitar store with guitars, amps and pedals and all the other gizmos to do with guitars. A music aficionado’s paradise, where they can come and look at stuff for hours before they make purchases, attends clinics and seminars and make contacts with musicians and producers. That would be cool.

Or even a music recording studio. For upcoming & independent rock bands. Nice! Based on the 1977 Robin Cook novel of the same name and directed by Michael Crichton, Coma is a 1978 medical thriller starring Genevieve Bujold, Michael Douglas, Elizabeth Ashley, Richard Widmark, and Rip Torn (who I didn’t even recognize until the end). Also starring in small roles are pre-fame Ed Harris & Tom Sellek.

Dr. Susan Wheeler, who is having trouble in her relationship with fellow resident Dr. Mark Bellows, is devastated to learn that a close friend of hers, Nancy Greenley, is pronounced brain dead and ends up in a coma after minor surgery at the Boston Memorial Hospital. Susan, who works there along with Mark, decides to check up on the records and finds that over the previous year a number of other fit young people have ended up the same way. When another young & otherwise fit person suffers the same fate she investigates and finds out that all 12 cases took place in the same operation theater, OR 8, and that all the comatose bodies were taken to a remote facility named the Jefferson Institute. As she continues to investigate she runs into road blocks, seemingly from a Dr. George, Chief of Anesthesiology at Boston Memorial Hospital.

After a fun weekend with Mark she tries to enter the Jefferson but is told that tours are only conducted on Tuesdays. As she gets closer to the truth, a maintenance man, who offers to give her information, is killed by a security guard who then tries to kill Susan but she escapes from the hospital and finds out that Carbon Monoxide is being filtered through the gas tubes in OR 8. She runs to Mark’s apartment but on hearing him speak about her on the phone to someone, she panics and runs away. She goes for the tour at the institute and finds out that the Jerfferson is a front for harvesting organs to be sold to the highest bidder on the black market. Boston Memorial is in on this, purposely inducing comas in patients whose organs match those of potential buyers. She is almost caught by security but sneaks out on top of an ambulance that is delivering some organs to an airport.

Susan goes to see Dr. George Harris, the Chief of Surgery, to who she has confided her suspicions and tells him everything. However it turns out that Dr Harris is the mastermind behind this operation and he drugs her with a substance that creates a pain mimicking an appendix about to burst. He rushes her to surgery and says that he will do the operation himself. Mark meets Susan there and she manages to convince him that her life is in danger and he also hears Dr. Harris insist for OR 8. Mark stops the carbon monoxide from entering the gas tubes and takes Susan away after her operation is shown to not have an inflamed appendix. The two lovers have Dr. Harris exposed and the final scene is of him waiting to be escorted by two police officers.

It has some tense moments and the acting is top notch. The movie itself is a bit dull in places and I hope they do remake it someday with more excitement. 8 outta 10! 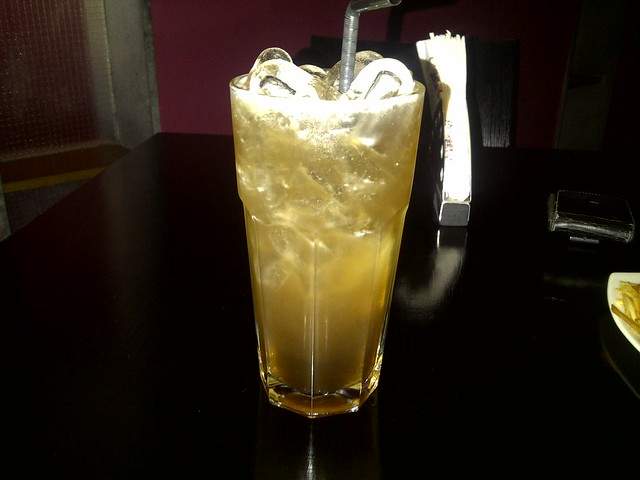 Had a Long Island Ice Tea after more than a year or so. The prices have increased but glad to see that so has the quantity. It’s a bigger glass and it was refreshing and good.