I had arranged a cab to pick me up at my apartment and take me to the airport at around 8:30 am My Air India flight to Chennai was at 12:20 pm and I wanted to be early by atleast 2 hours as I had never been on a flight since 1988 and wasn’t sure of what I would do before getting in the plane. I was ready by 8 am and called the cab company to check on the arrival. At 8:35 am I said goodbye to my folks and got into the taxi and it started to rain. Heavily too! We took almost 90 minutes to reach the airport in Nedumbassery and I stopped at an ATM to get some cash out. I paid the taxi guy and got into the airport to get to the check in section.

As the check in counters for Air India weren’t open yet, I took a seat and waited for a bit. Then 10:30 a, I had my luggage go through the conveyor belt for checking and then got myself checked in. I carried my laptop bag with me but the big bag went through. Then it was onto security check before I went to the lounge area. As I got in i got a message that the plane was delayed till 1:20 pm, an hours delay so I thought I might as well get some coffee. It said that it was a mochaccino but it tasted nothing like one and I bought a chicken cutlet as well and as I was leaving I also bought a Snickers bar for later. As I sat back on a comfy sofa I met a guy who I had worked with in Idea and he was in the same flight as me, taking a connection flight at Chennai to Dubai. We sat and talked until it was time for us to board the flight. 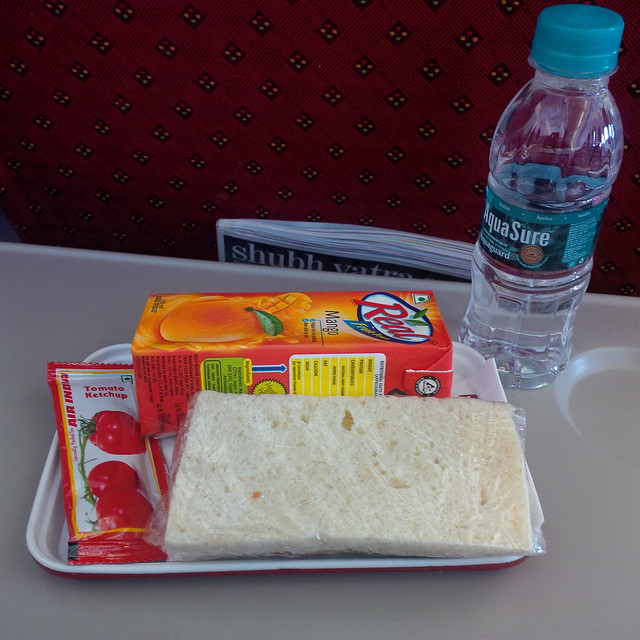 We got into the coach and were taken to the plane. I had an aisle seat and we waited for takeoff. I must say that having seen all the gorgeous chicks who are staffs of Air Asia, Jet Airways and IndiGo Air, Air India is such a disappointment with the older ladies with too much makeup. One of them was surely my mom’s age! We had just over an hour’s flight, slightly shaky and a bit noisy for a plane that looked awesome from the outside. Lunch was half a sandwich ???!!!, a box of juice and a small bottle of water which everyone finished in 2-3 minutes flat. I got off at Chennai, got my luggage, called the contact at the Chennai office and then got a prepaid taxi to my guest house. I got there and the caretaker let me in. I have a room with a bathroom attached, two bed (but only I will be using this room). It’s a really old building / apartment complex with they have air conditioning in each bedroom, an old tv with cable and most importantly, WIFI!

Dinner was chappati, rice, daal and a veggi kofta which was good. I tried watching some tv but was mostly online till 11pm when I went to sleep. A stupid cat in heat woke me up at 2:20 am after which I couldn’t get back to sleep so I laid back till 5:30 am. I got some coffee and then went to the loo and shaved, took a shower and got ready for going to the office. I needed to get there earlier than usual. Here we go!