So…I have never ever been to a Starbucks in my life until this Friday. And that’s because they don’t have an outlet in Cochin or anywhere near here for me to visit. There isn’t one in Kerala at all but there are a couple in Chennai. So on Friday after I left the office post raising a request for my return flight back to Cochin, I called for a taxi and headed towards Phoenix Market City / Phoenix Mall in Vellacherri (which is part of the main city of Chennai). It took me almost 40 minutes to get there. 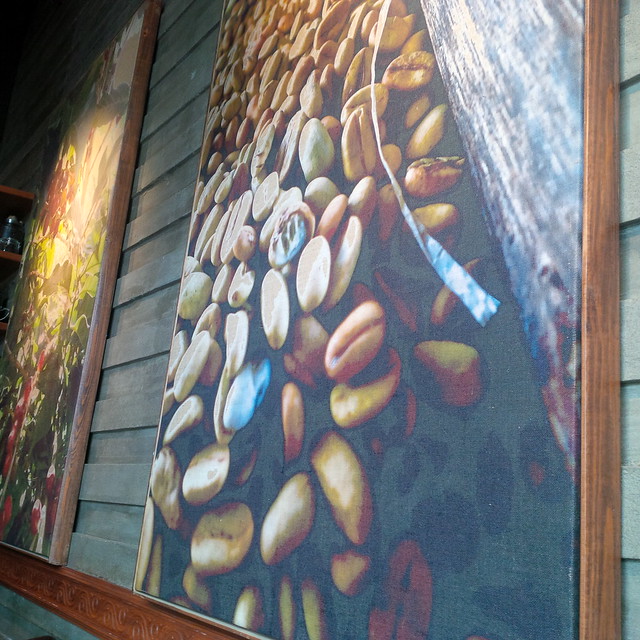 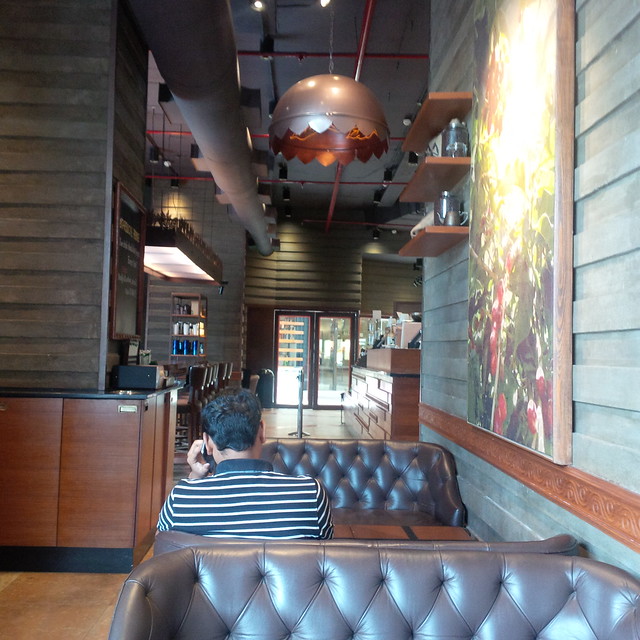 I entered the mall after the elaborate security checks and immediately fell in love with the large mall. We need more malls! I walked into the ground floor and immediately saw a large banner for Dunkin’ Donuts. But I think that was just an announcement of the franchise opening (I didn’t bother to read it completely) and did not see an outlet in the mall. But I turned left at one end and saw……Starbucks! Yes, it’s like the mothership calling me home! 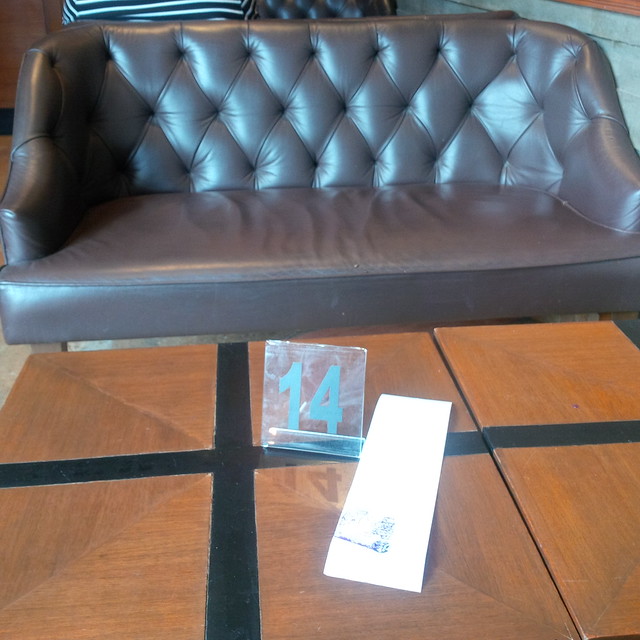 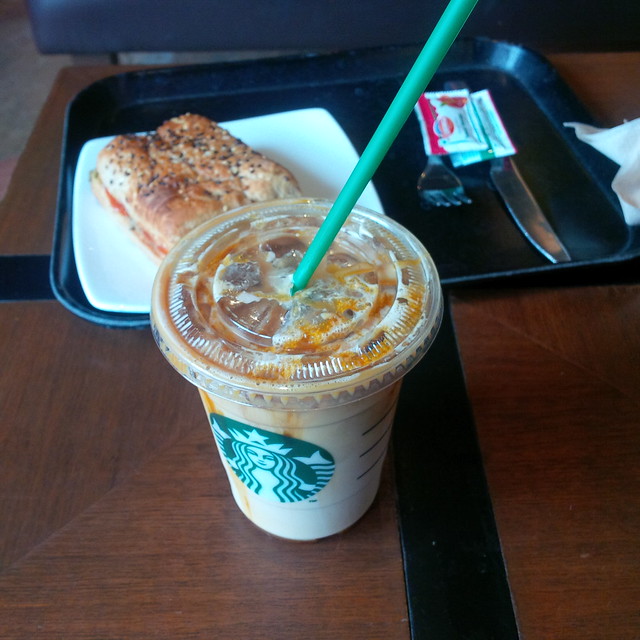 So I didn’t know that they had a Starbucks here but I was happy anyways. Starbucks is one of the franchises that I really wanted to try (it was in my top 5) and I walked in, checked out their menu and settled on an iced grande caramel macchiato and a basil, tomato & mozzarella cheese sandwich on foccachia bread sandwich! Whew, that is a mouthful. And what a good mouthful it is! 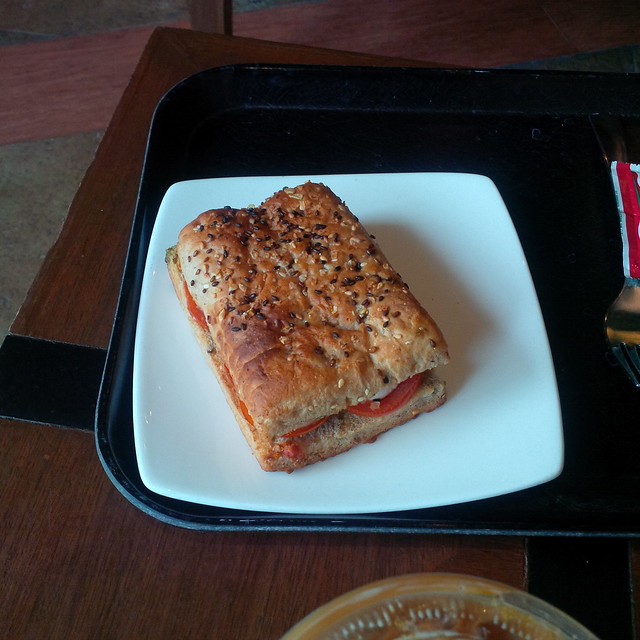 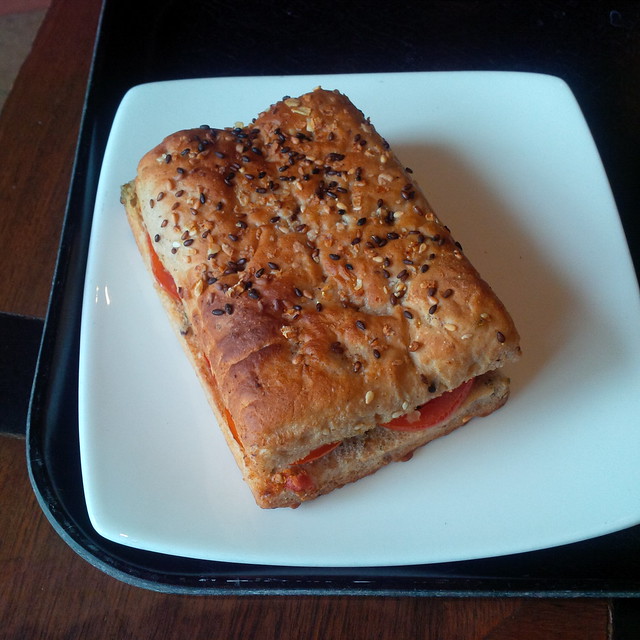 So here is the large elaborately lengthy named a basil, tomato & mozzarella cheese sandwich on foccachia bread sandwich. That bread is so delicious even on it’s own and I love the seasame seeds on it. It’s also got fennel on it, I think. The mozzarella was delicious but the tomatoes were a downer. The basil was more like a pesto but I like the combination so much anyway. It was really good and light. Not having had anything other than a coffee or two for breakfast, I was so happy for that sandwich. 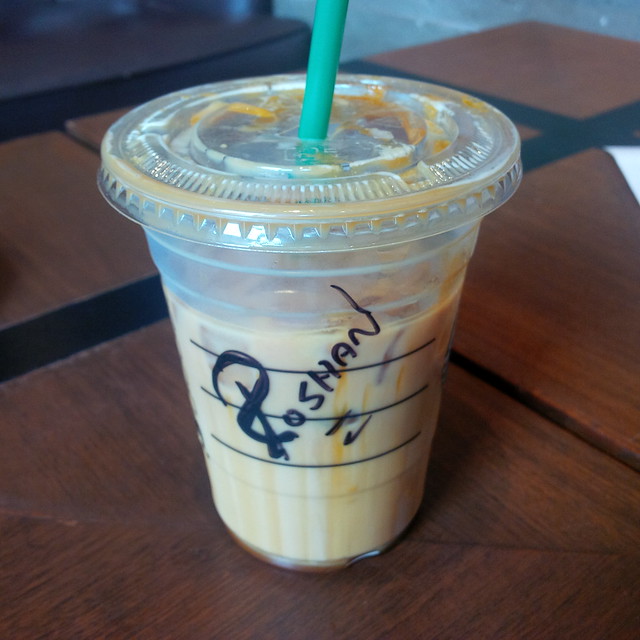 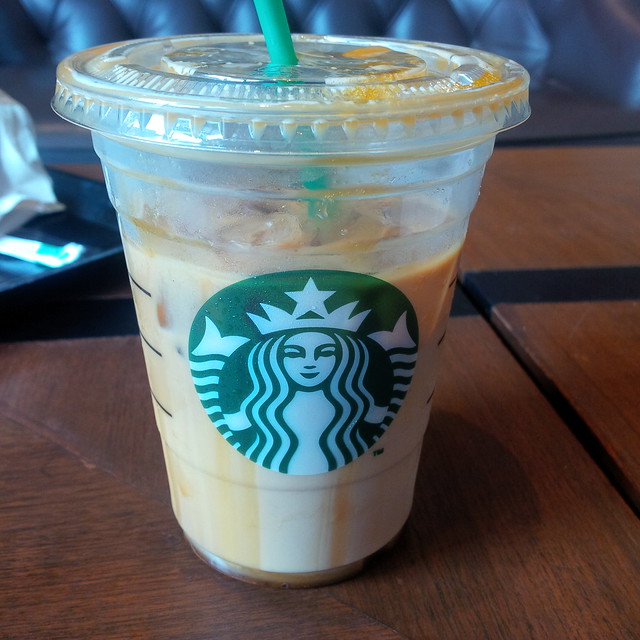 And ofcourse, the reason why I went in, a famed coffee from Starbucks. I had a hard time settling on one coffee to try and decided to go with the iced grande caramel macchiato. It was good but I expected much more. It didn’t blow my mind or anything and that could be because I built it up in my head for so many years before actually trying it out. But still good. I will have a review video out sometime soon. Enjoy the pics!

Well I am back home in Cochin but I thought I’d give you an idea of where I was staying for the past 6 days. From the last Monday to Saturday I was put up at Apartment 47 of Desh Apartments in Urapakaam on the outskirts of Chennai. It really is a dumpy area and not at all like the city section of Chennai. There infact was a large garbage dump, filled with rotten & slimy, smelly shitty stuff and waste and who knows what else. Worse the dump was infested with flies and there were a bunch of stray cats, dogs, cows and crows scavenging the garbage for things to eat. Worse, I had to walk past that – gagging the whole time and trying not to lose my breakfast – to get to the junction and hail an auto rikshaw. 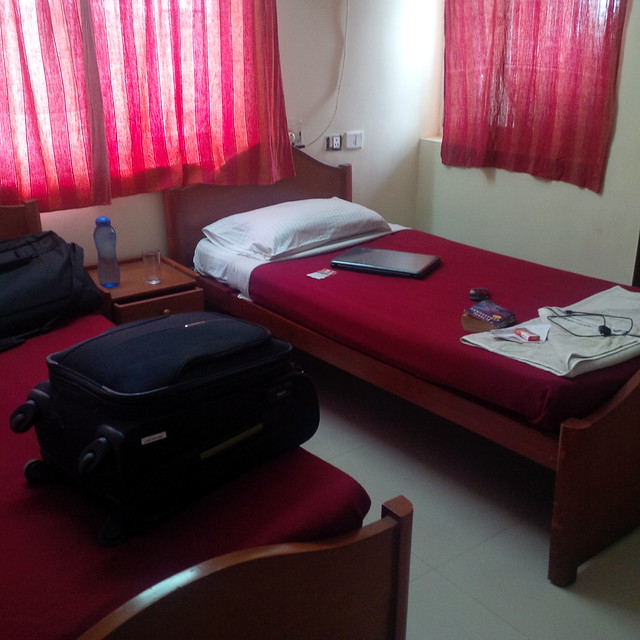 Having said that, the large apartment complex – with 4 blocks – that is called Desh Apartments was an old but neat and clean apartment building with proper security at the gate. The buildings were quite old but the flooring was good and newish. Bathrooms were pretty old and could really use an upgrade. My shower was so powerful that I had to use the lowest settings or the needle like sprays would hurt my face and body. 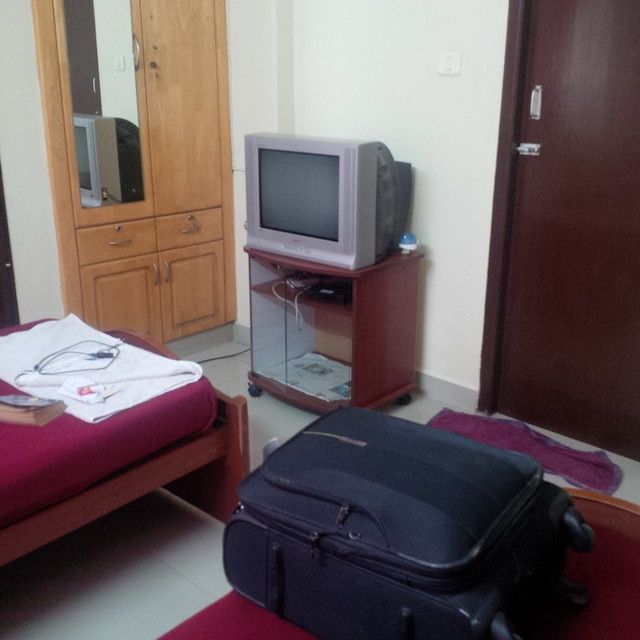 I lived in a 3 bedroom (2 with attached bathrooms) apartment, which was about 1600 sq ft in total or thereabouts. It had a spacious living room with a tv, a coffee table, chairs and sofas. They had cable tv for all 3 rooms as well but the tvs were pretty old and hence did not support any of the HD channels. I watched very little tv when I was there. It had a small kitchen, pantry area, the 3rd bathroom, and a small hall in between with a small table seating 4 on which breakfast, lunch & dinner were served. There were two small single beds in my room with a small bedside table and a tv stand with an old cathode ray tv. A built in cupboard / closet for your clothes and a small balcony competed the room. 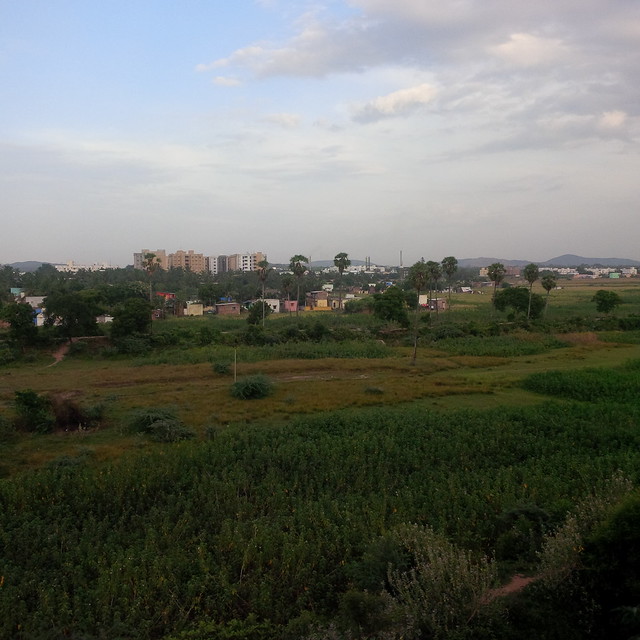