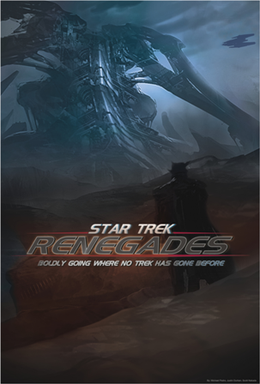 So we have yet another fan film (or in this case a series pilot) based on the Star Trek universe. This is the 4th that I have watched and one that I like a lot just like the other 3. Star Trek: Renegades is a fan film based upon the Star Trek franchise that features several characters from commercially produced Star Trek series, played by the same actors who realized them for film and TV. Made on a budget of roughly $375,000, the film was largely funded through crowdsourcing, and the film’s producers claimed they were going to submit it to CBS as a spec TV pilot (however CBS have turned down the offer to make it into a series). The completed pilot film was released for public viewing via YouTube beginning August 24, 2015. Plans have been announced for a web based series, much like Star Trek Continues.

It is about 10 years after Voyager comes back to earth. A now 143 year old Admiral Pavel Chekov, head of Starfleet Intelligence, is worried about the crisis that the Federation is in as an unknown alien force is destroying the Federation’s main suppliers of dilithium crystals (the primary catalyst for the fuel used in faster-than-light travel). Space and time have folded around several planets, isolating them from outside contact. The phenomenon is unnatural – someone or something is causing it to happen. Chekov gets a message from his friend Admiral Satterle (Herbert Jefferson Jr.) that he is on to a conspiracy within Starfleet and that he is to trust no one. Before the message is over, Satterle is killed in an explosion, which Chekov knows is sabotage. Not knowing who he can trust within Starfleet, Chekov enlists Commander Tuvok, the current head of Section 31, to put together a covert renegade crew of outsiders who will have to find out the people behind this. Tuvok knows of an able leader – Lexxa Singh, a descendant of Khan Noonien Singh – but who is in a Federation prison!

Tuvok gets Lexxa to agree to the mission, dangling the hope of finding her older sister, and she is released from prison and joins her crew of outcasts – Dr. Lucien (Sean Young), Ragnar (Gary Graham), Icheb (Manu Intiraymi), Fixer (Edward Furlong), Jaro Ruk (Kevin Fry) & Ronara (Chasty Ballesteros) – on board their ship, The Icarus and head to investigate. They must evade the USS Archer led by Captain Alvarez (played by Corin Menec) who is unaware of the nature of the Icarus’s mission and stop the aliens led by Borrada (Bruce A. Young) before they can destroy earth using two weapons that case the folding of space. Robert Picardo has two brief scenes as Dr. Lewis Zimmerman while Richard Herd does a brief appearance as Admiral Owen Paris. From Star Trek Continues we have Grant Imahara as Lt. Masaru & Vic Mignogna as Garis coming in to support the Renegades team. Lexxa and her team are able to stop the aliens in time and also uncover a couple of conspirators in Starfleet.

In the end the Icarus crew is given two extra crew members to replace the ones they lose in this mission & their freedom in exchange for the occasional covert operation; they will never be part of Starfleet or having any status in the Federation and in fact will be hunted down as only Chekov & Tuvok will know of their arrangement. Sounds like a good premise for a regular tv series. What did I like about the show? The choice of main cast was good, having Picardo, Russ & Chekov was a huge plus. Wilkinson looks great as does Chasty B but I think Manu as Icheb was just excellent as was Edward Furlong as Fixer (check out the surprise about that character). Some of the others were really not good, including the crew members of the Icarus that die, the villains and what the heck is with that great great granddaughter scene with Chekov? That was my least favourite part of the movie. Make isn’t the best but hey they barely had a budget and that also shows on the sets where they have to be on planets. Starfleet headquarters and the Archer’s interiors looked very tacky to me. However the space scenes and battles were awesome as were the CGI effects on Icheb’s new enhancements. Very well done.