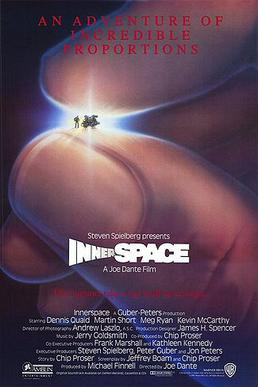 The 1987 scifi comedy Inner Space is a film directed by Joe Dante and produced by Michael Finnell. Steven Spielberg served as executive producer. The film was inspired by the 1966 science fiction film Fantastic Voyage. It stars Dennis Quaid, Martin Short and Meg Ryan, with Robert Picardo and Kevin McCarthy, with music composed by Jerry Goldsmith. It earned $25,893,810 of domestic gross revenue and won an Oscar. This is a film that I remember watching as a kid, probably around 1988 or 89 with my cousins.

A down on his luck Naval aviator Lt. Tuck Pendleton resigns his post after his break up with his girlfriend Lydia Maxwell, joins up as a volunteer for a secret miniaturization experiment. He is placed in a submersible pod and both are shrunk to microscopic size. They are transferred into a syringe to be injected into a rabbit, but the lab is attacked by a rival organization, led by scientist Dr. Margaret Canker, that plans to seize the experiment and steal the miniaturization technology. The supervisor of the experiment Ozzie Wexler grabs the syringe and tries to escape away from them but is caught up with at a mall by Canker’s henchmen, the cyborg Mr. Igoe, and is fatally shot. Before he dies, Wexler injects the contents of the syringe into the posterior of an unsuspecting Jack Putter a hypochondriac Safeway grocery clerk, the first person he comes into contact with. The pod with Tuck floats into Jack’s system and soon the Lt. realizes that he inside a human and not the rabbit that the experiment had planned out.

After attempts to radio the lab are unsuccessful, Tuck navigates the pod to the optic nerve and implants a camera so he is able to see what the “host” sees. Tuck makes contact by attaching another device to Jack’s inner ear, enabling him to talk to Jack, initially with embarrassing consequences. Tuck explains that the pod has only a few hours’ supply of oxygen and needs his help in order to extract him by going back to the lab. At the lab, the scientists explain to Tuck and Jack that the other group stole one of two computer chips that are vital to the process. The group’s mastermind is Victor Scrimshaw. His henchmen include Canker, Igoe, and “The Cowboy”. Kack contacts Tuck’s estranged girlfriend Lydia a reporter who has had dealings with the Cowboy. They learn that the Cowboy plans to buy the computer chip from Scrimshaw. After knocking the Cowboy unconscious using the pod’s equipment, Tuck controls the muscles of Jack’s face, altering Jack’s features so he looks identical to the Cowboy. Lydia and Jack, posing as the Cowboy, meet with Scrimshaw to steal the chip from him.

However, as they’re about to take possession of the chip, Jack’s nervousness overrides the transformation of his face, exposing the scam. Mr. Igoe captures Jack and Lydia and takes them to the lab. While imprisoned, Jack and Lydia share a kiss, which, unknown to them, transfers Tuck into Lydia’s body through their saliva. Once taken to the lab, the criminals miniaturize Igoe and inject him into Jack to locate Tuck, kill him, and obtain the other chip, which is attached to the pod. Once Igoe has been injected, Jack and Lydia escape, steal back the chip and order everyone in the lab at gunpoint into the miniaturization device, including Scrimshaw and Canker. However, not knowing how to operate it, they only manage to miniaturize everyone to 50% of the original size. Tuck, now inside Lydia, finds a growing baby and realizes that she is pregnant with his child.By going to Lydia’s eardrum and playing their song (Sam Cooke’s Cupid), he is able to alert them what has happened. Jack and Lydia kiss again to transfer Tuck back. They frantically drive back to the lab in order to enlarge Tuck, not realizing that miniature versions of Scrimshaw and Canker are hiding in the back seat.

While the villains attempt to subdue Jack and Lydia, Mr. Igoe locates Tuck and attacks him. Tuck disables Igoe’s craft and Igoe is killed after Tuck scares Jack to increase the level of gastric acid in his stomach. Igoe is killed after he falls into Jack’s stomach and is digested. Back at the lab, with only minutes of supplemental oxygen left in the pod, Jack follows Tuck’s instructions to eject the pod from his lungs by making himself sneeze. Tuck and the pod are successfully enlarged, and he is reunited with Lydia and finally gets to meet Jack in person. The film ends at Tuck and Lydia’s wedding, held at Wayfarers Chapel, where Tuck wears the chips from the experiment as cuff links. When they climb into the limousine, it is revealed that Cowboy is the driver and Scrimshaw and Canker are hiding in the trunk, inside a suitcase. Now confident and in control of his life, Jack recognizes the Cowboy and jumps into Tuck’s vintage 1967 Mustang, pursuing the limousine to rescue the newlyweds.

Although it hasn’t aged that well, the movie has it’s share of laughs and can keep you entertained on a dull weekend afternoon. I find it good enough for a 7.5 outta 10!

What’s the thing you’re most scared to do? What would it take to get you to do it?

Appropriately enough as Halloween is tomorrow. Well I have a deep fear of snakes and large spiders and disgusting creepy crawlies like them. Mainly huge spiders as I do not have much chance of coming up on a snake as much. But in thick bushes, nasty wastes and thick trees and stuff can lie both these creatures and I am terrified of them. I do not want to get acquainted with them at all though some non-poisonous snakes or the snakes with the venom removed can be quite beautiful and when I see people handling them, I do think it is cool. Not so much with spiders though!

I mean those things are nasty and ugly and yuck. Oh yeah Spider-man is cool and awesome and I wish I could spin webs and swing across the buildings like he does but spiders are fucking ugly and their legs are just  creepy as hell. Oh yeah and cockroaches – how I hate them! I hate them with a vengeance, I will hunt and kill any roaches that I can see. We occasionally get roaches when it rains quite a bit in here, yes even on the 7th floor, and I will get the nearest newspaper and kill the sonsofbitches and only then can I have peace of mind.

These shitty creatures are disgusting and vile and crappy as hell.