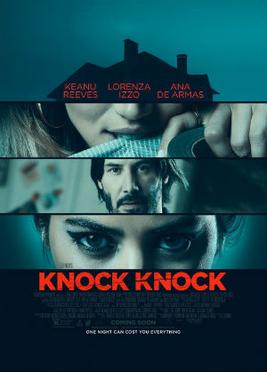 Evan is a 43 year old successful architect living in huge house in the sprawling hills  outside of Los Angeles. His family life is seemingly blissful, being in love with his Spanish wife, Karen, a successful artist and sculptor herself, and their two adorable kids. On father’s day the kids give Evan their present and cake and have breakfast together before Karen and the kids go for a weekend beach trip. Evan has to stay behind as a work project came up and so it’s just him and the family pet, a small dog, in the house. On a rainy night, Evan is interrupted from his work by a knock at the door. Two young ladies drenched from the torrential rain ask him for the address to a party, seemingly lost. As their phone is dead they ask Evan if they can use his internet to contact a friend. He lets them in and gives them towels and a tablet.

The girls, Genesis & Bel, find out that they have the wrong area so Evan orders an Uber for them but it is 45 minutes away. He gives them robes and puts their wet clothes in the dryer as the girls make themselves at home. Evan tries to be a good host showing them his record collection and DJ equipment (he used to be a DJ in his youth), warding off their flirty advances by changing seats and talking about his wife. However they won’t stop and when Evan leaves the room for a bit and sees that the driver has come, he finds the girls naked in his bathroom and practically begging him for sex. Temptation finally wins and he gives in, having a threesome with the two. Then next morning, they girls don’t want to seem to leave and making a mess of his house cooking breakfast and messing up Karen’s art. He threatens to call the cops but the girls then claim that they are underage. A friend of Karen drops by and despite Evan trying to get her away, she sees Genesis who comes out, and assumes correctly that Evan is cheating on Karen and angrily leaves.

Evan finally threatens to report a break-in, they give in and agree to be taken home. He drops them off at an upscale neighborhood where they supposedly live. He then returns home, cleans the mess, and tries to go back to his work. However that night, the girls break in and knock Evan unconscious and tie him up and wreck a lot of the belongings in the house and the art and stage a mock game show. Evan is forced to have sex with Bel,  while role-playing as a school girl in his daughter’s school uniform while he is tied up and Genesis secretly tapes them. When Evan finally releases himself, he jumps at Bel and knocks her off. He charges at Genesis, who stabs him in his wounded shoulder with a fork. She then pins him to the ground and both girls proceed to tie him up to a chair with electrical cord. Luis, Karen’s assistant comes by, so the girls hide Evan and Genesis pretends she is Evan’s niece. It almost works but Luis panics upon finding the vandalized sculpture and immediately realizes these girls are lying about their relation to Evan.

Louis then finds Evan tied up to a chair, but before he can help him he hears the girls smashing the vandalized sculpture. He runs to stop them, but then has an asthma attack, and realizes they took his inhaler. The girls play monkey-in-the-middle with his inhaler, and as he tries to get it back, he slips on a piece of the sculpture and knocks his head on the edge, killing him. They turn Louis’ body into a red sculpture and dig a makeshift grave in the backyard meant for Evan. They reveal that they had spied on him before contacting him and they do this to other married men as a game; the men always say yes to having sex with the girls. They are also not underage; they lied about that to him. They bury him upto his neck and show Evan the video of him and Bel having sex and upload it to his facebook account on his phone and we see the comments from his shocked friends pouring in. They finally leave, taking Evan’s small dog with them, leaving Evan to try and dig his way out.

Evan’s wife returns a little bit later with their kids and sees the chaos in the house with lots of crude and vulgar drawings on the wall and on the family photos and the art as the movie ends. An alternate ending has Evan putting on black gloves and shows him walk up to a house where the girls are inside torturing their latest victim. Upon hearing the sound of knocking they both tense up and ask: “Who’s there?” and the movie ends.

Not bad though there are some stuff we can’t buy. The spying and the timings seem a bit too much. Luis’ death also is a bit too convenient as is his idiotic fumbling and not releasing Evan from his constraints before getting killed plus his asthma attack. Still for a black comedy, it’s an ok film. I will give it a 7 outta 10!

Howdy Trekkies. It’s been a while since I shared my ever growing collection of Star Trek starships, all of which are from the Official Star Trek Starship Collection from Eaglemoss for now atleast. So here’s another one. 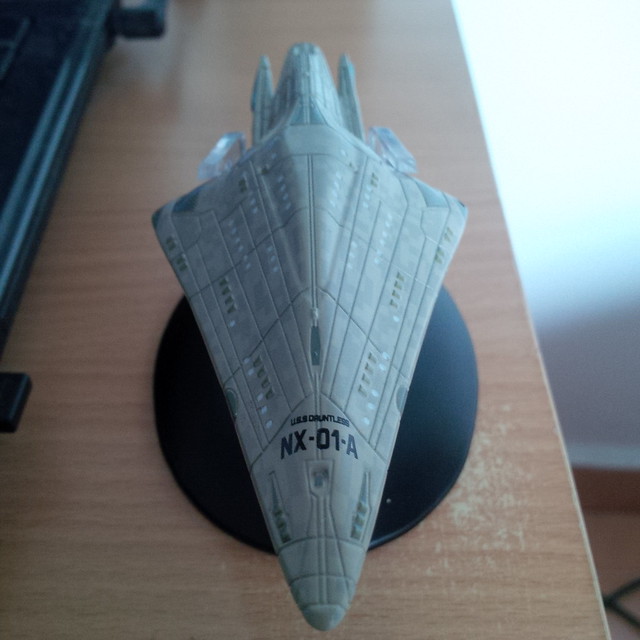 The “USS Dauntless” was an alien starship disguised as a Federation Dauntless-class starship that was in service to Starfleet in the late 24th century. Allegedly, the Dauntless was the prototype for its class of starship. In mid-2374, while still stranded in the Delta Quadrant, the USS Voyager received a transmission from Starfleet Command via the ancient Hirogen communications network. Although the message contained a number of unencoded personal messages, there was also an encrypted file that the Voyager crew was unable to open. 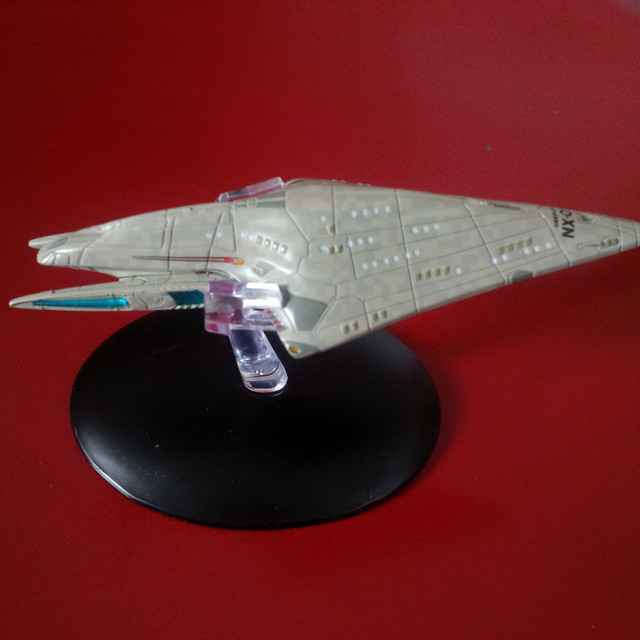 On Stardate 51978, Voyager encountered an alien named Arturis who had a gift for translating languages, both verbal and visual. He easily decrypted the mysterious message, which gave a set of coordinates near their current location. Upon arrival, the Voyager crew discovered the Dauntless, which activated its quantum slipstream drive when the away team of Chakotay, Tom Paris and Tuvok boarded it to travel fifteen light-years in a few minutes. The Dauntless was relatively minimalist by other Starfleet standards, possessing only one transporter and no replicators, holodecks or shuttlecraft. While investigating the Dauntless, it soon proved to be an elaborate trap set by Arturis to arrange for the Voyager crew’s assimilation by the Borg, with its resemblance to Starfleet technology the result of Particle synthesis, an advanced form of replicator technology. Arturis’s race had been recently assimilated by the Borg, and Arturis blamed that event on Kathryn Janeway’s short-lived alliance with the Borg against Species 8472. 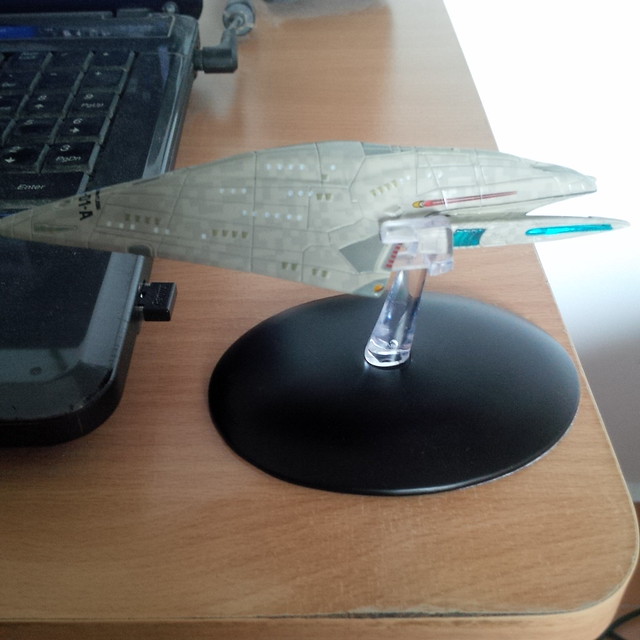 He had assumed that the crew’s desire to get home would prompt them to immediately take the ship and use the slipstream to try and get back to Earth, only learning after activating it that it was programmed to take them to Borg space, but past experience and an unwillingness to abandon Voyager prompted the crew to carry out various tests first. After Janeway decoded enough of the original message to reveal that Dauntless was a trap, Arturis attempted to simply take Janeway and Seven back to Borg space, but Voyager was able to duplicate the slipstream and rescue them, leaving Arturis stranded aboard the Dauntless as it entered Borg space, where he was presumably assimilated. 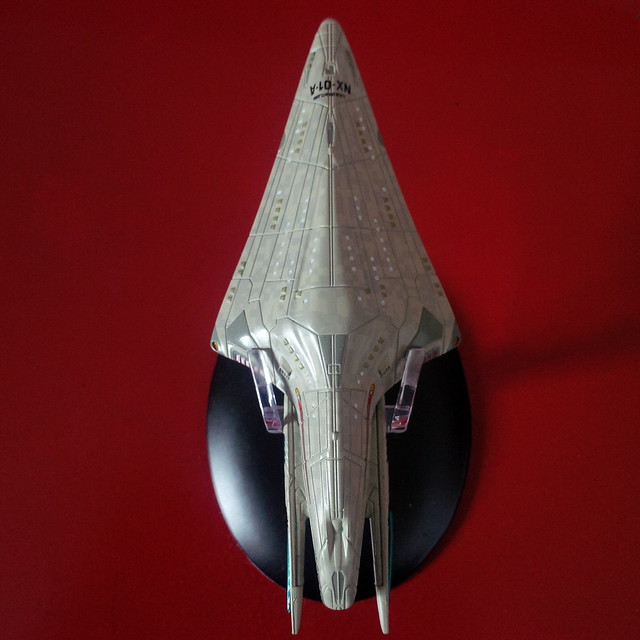 Luckily for Janeway non of her crew perished in the incident and the only casualty was Arturis. In 2375, Voyager used the slipstream technology examined aboard the Dauntless to construct their own makeshift slipstream drive. It did not succeed. 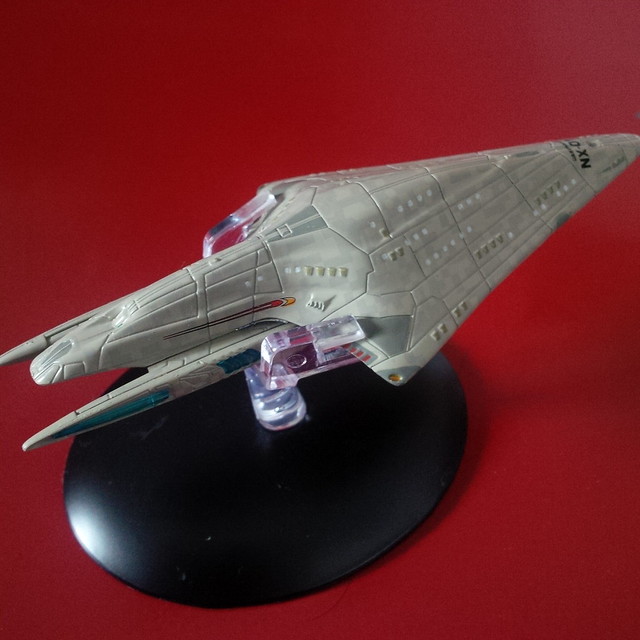 A beautiful and awesome looking design that an advanced alien came up with to capture the crew of the Voyager. Enjoy the video.