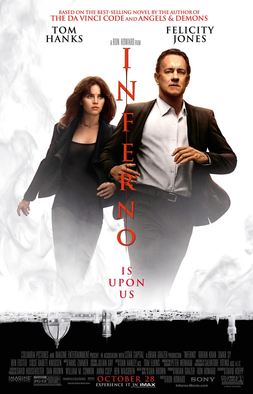 Inferno is a 2016 American mystery thriller film directed by Ron Howard and written by David Koepp, based on the 2013 novel of the same name by Dan Brown. The film is the sequel to The Da Vinci Code and Angels & Demons, and stars Tom Hanks, reprising his role as Robert Langdon, alongside Felicity Jones, Omar Sy, Sidse Babett Knudsen, Ben Foster and Irrfan Khan.

The movie starts off with billionaire geneticist Bertrand Zobrist,who believes that the world is overpopulated and that rigorous measures are necessary to reduce the population, being chased to a tower and who commits suicide rather than being caught from the group of men chasing him. Robert Langdon, awakens in a hospital room in Florence, Italia, with no memory of what has transpired over the last few days, but being plagued with visions of Hell. Dr. Sienna Brooks, one of the doctors tending to him, tells him that he is suffering from amnesia as a result of a bullet wound to his head. All of a sudden, Vayentha, a female assassin, shows up in the hospital. Sienna helps Langdon to escape, and they flee to her apartment. In his possession Langdon finds a Faraday Pointer with a modified version of Botticelli’s Map of Hell, which itself is based on Dante’s Inferno. Langdon & Sienna make out that Zobrist created a a virus with the potential of decimating the world’s population. Both the assassin and local law enforcement reach the apartment so the two escape via a different exit. Langdon’s knowledge of Dante’s work, history, and hidden passages in Florence allows the two to follow clues such as letters and phrases which lead to various locations in Florence and Venice, while evading the assassin and the authorities.

The assassin Zayenta works for a mysterious security company led by Harry Sims (Khan, what a ridiculous name your character has) who are acting on behalf of their client Bertrand Zobrist, who has provided Sims with a video message about the virus, to be broadcast after the virus has been released. The armed authorities turn out to be the World Health Organization (WHO), headed by Elizabeth Sinskey, trying to prevent the release of the virus. Shocked by the video, Sims allies with Sinskey. However, Langdon and Sienna are contacted by Bouchard, a man purporting to be working for the WHO, warning them that Sinskey has a double agenda and is after the virus for her own profit. The three cooperate for a while, until Langdon realizes that Bouchard’s story is a lie and that it is Bouchard who is after his own profit. Again, Sienna and Langdon flee. Langdon figures out that the virus is in the Hagia Sophia in Istanbul. With that knowledge, Sienna abandons Langdon, after revealing that she is the lover of the late Zobrist and that she will ensure the release of the virus. Zobrist and Sienna used to play treasure hunt games; this treasure hunt was the backup plan in case something would happen to Zobrist. Langdon now joins Sims and Sinskey.

We learn that Sinskey and Landgon were romantic interests but their jobs in different parts of the world have kept them apart. It was she who asked Langdon for help in interpreting the imagery from the Faraday pointer. Langdon was then kidnapped by Sims’ men and drugged with benzodiazepine to induce a memory loss; the events in the hospital were all staged. The virus is in a plastic bag hidden under water in the Basilica Cistern in Istanbul. The WHO team with Langdon, Sims, and Sinskey race to locate and secure the bag while Sienna with two Turkish allies attempts to detonate an explosive that will rupture the bag and aerosolize the virus. The bag is secured just in time, while Sims, Sienna, and the two Turkish men are killed. The movie ends with Sinsky bidding farewell to Langdon, who takes some time out to return a Dante artifact back to it’s rightful museum before he leaves for Cambridge.

Kinda boring and haphazardly done to keep you entertained or interested in the story. I found it lackluster. The characters aren’t as interestingly or well done as the previous two films. Irffan Khan; never liked him before and certainly here he is the weak point with that ridiculous character. The Sinskly – Langdon relationship should have been explored more and I wish it ended better. 6 outta 10!