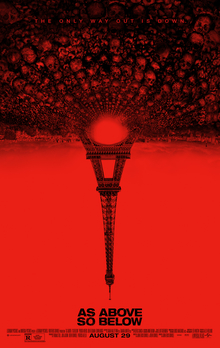 As Above, So Below is a 2014 American horror film written and directed by John Erick Dowdle and co-written by his brother Drew. The film was produced byLegendary Pictures and distributed by Universal Pictures, making it the first film in Legendary’s deal with Universal. he film was released August 29, 2014, and stars Perdita Weeks, Ben Feldman, Edwin Hodge, François Civil, Marion Lambert, and Ali Marhyar.

Scarlett, a professor and a scholar of alchemy continues her dead father’s work searching for the philosopher’s stone, a legendary alchemical substance capable of turning base metals into gold or silver and grant eternal life, discovered by Nicolas Flamel. After escaping death and/or being caught by authorities, she manages to find the “Rose Key” in a cave in Iran and takes pictures of the inscriptions before the cave collapses. She then heads to Paris and meets up with former lover George, a restorer of ancient artifacts who explicit knowledge of ancient as well as modern languages, to help her decipher the writings. Along with Benji the cameraman, they translate Flamel’s headstone, which contains a riddle that leads them 370 feet underneath the streets of Paris. She enlists the help of a guide called Papillon, his girlfriend Souxie, and friend Zed to search the Catacombs of Paris.

The group head in through a narrow side entrance and George almost decides not to go in (as he has claustrophobia) but a chasing cop makes him go in with the rest. After crawling through a narrow tunnel which collapses, they encounter female cultists who are singing and appear possessed. They find themselves in a blocked tunnel that Papillion is reluctant to breach, as the only people who have gone through, including Pap’s friend La Taupe (The Mole), have never been seen again. But as they go in they find La Taupe, who seems to have lost his mind, still alive and they follow him as he agrees to guide them out and informs them the only way out is down. They eventually find a tomb with a preserved Templar Knight, a mound of treasure, and the Flamel Stone. Removing the stone, Scarlett realizes too late that the treasure is a trap, and the room collapses. La Taupe is lost under the rubble and is left behind by the group.

Using the Flamel Stone Scarlett is able to heal the group’s injuries. They find a drawing of a door with a star of David on the ceiling which alerts them to a door hidden on the ground and gGoing through the opening, they find a tunnel marked with the phrase “Abandon all hope, ye who enter here” in Greek, identical to the entrance to Hell in Dante’s Inferno. In an inner room they find La Toupe who kills Souxie when she approaches him to help and then disappears in one of the tunnels. As they go in deeper Benji, who is alone on top for a few minutes tying a rope for the others to use, is pushed to his death by one of the female cultists. They encounter a burning car and an occupant, an incident from Pap’s past who pulls in Papillon and sinks into the floor. With his legs sticking out of the now solid ground, the others try in vain to pull him out but he is dead. As they continue, they see apparitions of terrifying spirits and demons. Statues in the wall come to life, and one violently attacks George. After trying to drag him further, George murmurs, “Vitriol”, another riddle from earlier, and Scarlett realizes the Flamel stone itself is yet another trap. Only by returning it will she find the real stone.

Scarlett battles a pool of blood and hands that try to grab her, sees an apparition of her hanging from a rope and then her dead father she returns to the crypt and finds a polished mirror, which is when she realizes she has the magical abilities of the stone. She returns to George, kissing him as heals him. She explains to George and Zed that as this place provides an alternate form of reality, they must fight their way through. As the hooded demons chase them, they find and jump down a deep hole. They first believe there is no logical way of surviving the fall but survive. At the bottom, they see the hole is no longer there. Eventually, Scarlett, George, and Zed find a manhole on the floor, which when pushed down delivers them right side up onto the surface, on a street overlooking the Notre Dame. Scarlett and George hold each other while Zed walks away, finally safe. In an ending log, Scarlett concludes her documentary by stating that her mission has been accomplished.

It was an ok movie, with an interesting premise. I wasn’t very happy with the camera stuff being like found footage but I guess it added to the frantic and claustrophobia feeling at times. Though parts of it I wasn’t too impressed, I especially liked the last 25 minutes or so. It helped that the lead actress is so cute, look at that smile and those lips. I’ll give it a 6.5 outta 10!

Crispy Shredded Pork from Golden Dragon Chinese Restaurant – quite crispy and light (despite the way it looks) pork that is quite delicious.

Arsenal’s six-match winning run in the Premier League came to an end against Middlesbrough but a point was enough to move them top of the table. Manager Arsene Wenger – celebrating his 67th birthday – watched his side dominate possession but underwhelm in the final third. The Gunners managed five efforts on target, but only one worried Boro keeper Victor Valdes when he pulled off a great one-handed stop to deny Alexis Sanchez. Aitor Karanka’s side defended brilliantly and, despite conceding much of the possession to the home side, created the better chances. Arsenal keeper Petr Cech blocked Gaston Ramirez’s header, twice denied the outstanding Adama Traore and also saved from Alvaro Negredo. The home side briefly thought they had won it in injury time but Mesut Ozil’s effort was rightly ruled out for offside. Despite remaining in 17th place, Boro should be buoyed by the display and unexpected result.

The invitations have been sent out, the hall is decorated and the party food is prepared – but then only a handful of guests turn up and music is barely audible. That is how birthday boy Wenger must have felt at the final whistle as his side, who have been in tremendous form, had their wings clipped by a resilient and disciplined Boro. Karanka’s side might have only had 25% of the possession but the gameplan was to set up a defensive wall across their area and hit the Gunners on the counter-attack. Wenger’s men tried almost everything. After failing to walk through the Boro defence they tried to play the ball over the top, but lacked accuracy. When they did have a sight of goal they lacked conviction. Sanchez tested former Barcelona team-mate Valdes from 20 yards but should have done much better with one from half that distance. They mustered a final set of attacks in the closing moments and had the ball in the net when Ozil poked in, but the German was clearly offside.

Finding goals was Middlesbrough’s problem coming into this game having scored only seven in the league. Loan signing Negredo netted on the opening day of the season but has been off-key since. At the Emirates he should have beaten Cech with a low shot and then, with moments remaining, he allowed Laurent Koscielny to tackle him in the area. Both Gaston Ramirez and in particular Traore impressed in midfield, with Karanka’s counter-attacking plan suiting the pacy Spaniard, who twice threatened with runs from his own area. One of those ended with a shot that Cech had to push away and another saw him play in Negredo for that late chance. The 20-year-old also had another strike saved by the Gunners keeper in the first half. If Boro build on this display and start finding the net then they might avoid a relegation battle at the end of the season.