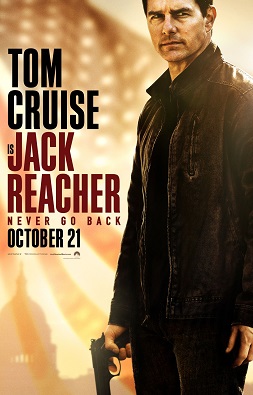 Jack Reacher : Never Go Back is a 2016 American action thriller film directed by Edward Zwick and written by Zwick, Richard Wenk and Marshall Herskovitz. A sequel to 2012 film Jack Reacher, the film stars Tom Cruise, Cobie Smulders, Patrick Heusinger, Aldis Hodge, Danika Yarosh and Holt McCallany. Despite the fact that the first movie didn’t make the kinda money that the studios were expecting, 4 years later we do get a sequel.

Jack Reacher has been getting help from army major Susan Turner in some of his investigations and they strike up a friendship with mild flirting over the phone. A few months later Jack decides to go to his old military headquarters to meet Major Turner but instead is ushered to the office of old rival Colonel Sam Morgan, who tells him that Turner has been accused of espionage and detained. Also Susan left word that Reacher was not to be involved or get information about her case. With the help of a young officer Sgt Leach, who provides him with a few info, Jack meets Susan’s lawyer, Colonel Bob Moorcroft who is initially reluctant to share info. Moorcroft, reveals that there is evidence that Turner is involved in the murders of two soldiers in Afghanistan, but Reacher believes she is being framed. Moorcroft also reveals an old acquaintance of Reacher’s, Candice Dayton, has filed a paternity suit against him, claiming he’s the biological father of her 15-year-old daughter, Samantha Dayton. Moorcroft is later killed by an assassin known as “The Hunter”.

Reacher tracks down Samantha and sees her shop lifting. She confronts him and asks if he is a cop and rebuffs him, believing he’s after her biological mother due to her past as a drug addict. Reacher is later framed for Moorcroft’s murder and detained alongside Turner. Assassins arrive to kill them, but Reacher neutralizes them, rescues Turner and they escape to Morgan’s house, having deduced he’s involved in the conspiracy, to extract information. After they leave, the Hunter kills Morgan and frames Reacher. From a thumb drive Reacher & Turner find photos of Samantha and know that she is being watched, so they head to her home to find her foster parents dead and a Samantha hiding in the kitchen. Upon learning from Sergeant Leach, that he’s also been framed for Morgan’s death, Reacher decides to escort Samantha to a private school for protection, but discover that she has her mobile phone with her and the enemy probably knows exactly where they are. They discard the phone and make a quick exit, during which Samantha steals a backpack from one of the students to use the credit cards. Reacher, Turner and Samantha travel to New Orleans in search of Daniel Prudhomme, the only eyewitness to the murders that Turner has been framed for. They find him in a derelict warehouse filled with drug addicts and learn that Prudhomme is connected to Parasource, a private military organization that is trying to cover up the murders.

Reacher contacts Turner’s friend, Captain Anthony Espin, to move Prudhomme into custody, but they are ambushed by assassins and Prudhomme is killed, while Reacher rescues Espin and finds out that the assassins are Parasource contractors. Parasource’s CEO, General James Harkness, then sends his enforcer, the Hunter, to capture Samantha after she uses a credit card to order room service. Reacher and Turner, along with Espin, acting on information provided by Prudhomme, intercept a flight of weapons due to leave the country, where they confront Harkness and his men and accuse them of corruption. Upon opening the crates, however, Espin find weapons as declared in the flight manifest. Before Turner can be re-arrested, Reacher opens up one of the weapons crates and discovers that they are filled with opium. They learn that Harkness framed Turner, who had been investigating his activities, for the murders of two soldiers who discovered that Harkness was selling weapons to insurgents and smuggling drugs into the United States. Espin and his men then arrest Harkness, clearing Reacher’s and Turner’s names.

Reacher & Turner then head back to rescue Samantha from the Hunter and his goons as they chase the girl into the parade and onto a rooftop. Reacher and the Hunter drop from the roof onto the pavement and vicious fight that culminates with Reacher breaking the Hunter’s arm, leg and neck, before dropping him off the rooftop. Reacher then admits to Samantha he might be her father. Following Harkness’ arrest, Turner is reinstated in her old position and goes back to her office, where her collegues and Captain Espin all welcome her back. Reacher promises to keep in touch before meeting Samantha at a diner to meet Candice, but it turns out that Reacher isn’t her dad as they didn’t recognize each other. Reacher and Samantha then reluctantly part. While preparing to leave, a phone rings in Reacher’s pocket and finds Samantha’s phone, which she had slipped on his pocket, with a final goodbye. Reacher smiles as he hitches a ride to the nearest town.

I liked this one better than the first and thought it was more entertaining. Sure, stuff like this doesn’t really happen in real life as no way can a man do what Reacher does. 7.5 outta 10.

Take a look at your bookcase. If you had enough free time, which book would be the first one you’d like to reread? Why?

Well, I’m gonna change this up a bit. It’s not a book I haven finished reading yet but it’s a book that I started to read and reached about a quarter of the way through. I’m talking about the first book in the A Song Of Ice & Fire series : Game of Thrones. I picked up the novel last year but I have only managed to reach about a quarter of it. Mind you, I have seen the first 6 seasons of the tv show and am a big fan of them. The books however, I haven’t even managed to put a dent in them.

The whole problem is because the series is so awesome and gives you such a wonderful viewing experience, which is something I love, getting into the books or atleast the first book, has been tough. Also I don’t spend as much as I used to on reading books. I devoured books for many years, reading and rereading them a lot. But Youtube has pretty much rendered me dead to most other stuff. Except ofcourse real tv shows and movies. Thus I have barely read any books in the last….3 years or so!

I know it’s a shame but I just can’t bring myself to dedicate sometime for some book reading anymore. I guess I will eventually get back to it someday. Just not in the near future.