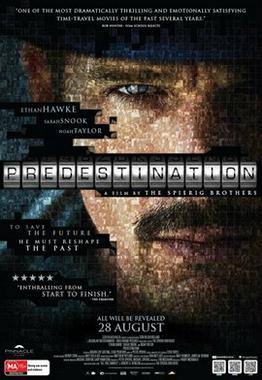 Predestination is a 2014 Australian science fiction thriller film written and directed by Michael and Peter Spierig. The film stars Ethan Hawke, Sarah Snook and Noah Taylor, and is based on the short story “—All You Zombies—” by Robert A. Heinlein.

A time traveling agent is in 1975 and attempting to disarm a bomb to stop the “Fizzle Bomber”‘s attack on New York. Things go wrong and it explodes causing a fire and the agent is severely burnt on the arms and face. A stranger pushes his time traveling device closer to him, so the agent is able to go back to the future and is taken care for by the agency. He is given reconstructive surgery and told that he will look very different from before. After he recovers he takes on his final assignment and goes to 1970 and works as a bartender.

One night he meets John, who is a writer under the pseudonym “The Unmarried Mother” for magazines about true confessions. They start talking and John decides to tell the Bartender about his own life; he was born Jane in 1945. As a baby she was left on the doorsteps of an orphanage and raised there. She excelled in her studies growing up but never fit in and always got into trouble. As an adult she applied for a program called “Space Corp”, which promised women the chance to go to space while providing astronauts R&R, but she was later disqualified because of a medical condition which she was not informed of, which a man named Robertson was interested in. While taking classes one evening, she bumps into a man who says he was waiting for someone.

They hit it off and start talking and soon fall in love. Months later the man walks away from her, telling her he will be back shortly but never returns.  Robertson approached Jane, revealing that Space Corp worked for the Temporal Agency, and this agency now wanted to recruit her. However when they find out that she is pregnant she is rejected and left devastated. While performing a Caesarean section, doctors discovered she was intersex, with internalized male sex organs as well as female sex organs. Complications during the birth forced them to remove her female sex organs, and she had to undergo a gender reassignment and begin living as a man. Furthermore, the baby was stolen by a mysterious man. Since then, John has been living a bitter life as “The Unmarried Mother”.

The bartender tells John about his time traveling and tells him that he will take him to back to the day that Jane met the lover who left her, so John can take revenge and kill him for ruining her life. In return, John has take over the agent’s job for whatever duration he wishes. The agent and John jump to that day in 1963. John prepares to kill his past lover before he can meet Jane. While waiting, he encounters Jane, and when they begin talking, John realizes that Jane’s lover was him. The baby born from this “self-fertilization” is stolen by the agent and brought to the orphanage 18 years earlier, in 1945. Therefore, Jane, John, and their baby are the same person, revealing a predestination paradox. The agent then goes to 1975 and helps the the burned man from the beginning of the film.

He then goes to 1963 and takes John back to the Temporal Agency so John can take over his job and the agent can retire in 1975 New York. However his device doesn’t  decommission itself as planned and he is ordered to go to a laundromat where he sees the Fizzle Bomber who is actually the agent’s future &older self, now suffering from psychosis as a result of excessive time travel. he Fizzle Bomber insists that his actions have saved and will save more lives than the lives lost, and that they ultimately lead to the reinforcement of the Temporal Agency. He tries to convince the agent that the only way to end the cycle is to spare his life, unlike the Fizzle Bomber did in his past. The agent denies he will ever become the Fizzle Bomber and kills his future self. He then tries to understand the paradox.

So that’s the story? The burned man, Jane, John, the agent, and the Fizzle Bomber are the same person. This agent’s creation was orchestrated by Robertson to create an agent who has no ties to time. This “perfect” temporal agent was responsible for both his own conception and death; he has driven the predestination paradox to its limit. Try to wrap your head around that one. It’s a well done movie and it had a very interesting scifi premise. It only made $4.3 million but it was made on a very low budget. I give it an 8.5 outta 10!

Burnley manager Sean Dyche was left “raging” after Alexis Sanchez scored an injury-time penalty to give Arsenal victory at Turf Moor. It was a repeat of last season’s meeting between the sides at Emirates Stadium, when Chilean Sanchez slotted in a 98th-minute spot-kick to win the game. It was also the third consecutive time that the Gunners had grabbed a winner in stoppage time against the Clarets. The win moves Arsenal up to fourth in the table ahead of north London rivals Tottenham, who drew 1-1 against West Brom on Saturday. Burnley remain seventh. The result was harsh on Dyche’s side, who defended valiantly and looked like grabbing at least a point, before referee Lee Mason pointed to the spot after defender James Tarkowski pushed Aaron Ramsey.

Gunners boss Arsene Wenger said: “From outside it looked 100% a penalty. I don’t know why he pushed him in the back. I would like to see it again.” Arsenal’s Petr Cech was the busier of the two goalkeepers, making two crucial saves to deny Johann Berg Gudmundsson, brilliantly tipping the Iceland international’s drive onto the post and keeping out a low, rasping shot. Robbie Brady also had a free-kick towards the top corner pushed away by Cech. Before the game, Arsenal had earned just four points away from home this season and their poor form on their travels looked to be continuing before Sanchez’s intervention.

Wenger’s side were missing the guile of playmaker Mesut Ozil, who was out through illness, and had just one other shot on target in the match, Lacazette’s low drive which was easily dealt with by keeper Nick Pope. Nacho Monreal drilled a fizzing shot from 25 yards narrowly wide and substitute Jack Wilshere’s deflected effort wrong-footed Pope but sailed wide of goal. Arsenal have now won all six league games in which both Sanchez and Lacazette have started, moving into a Champions League spot behind the two Manchester sides and defending champions Chelsea. Arsenal extended their unbeaten run to 10 top-flight matches against Burnley (won seven, drawn three).