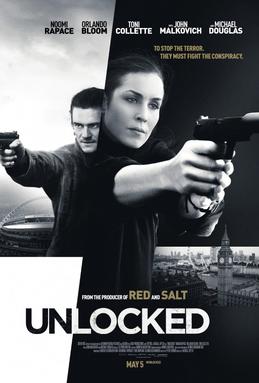 Unlocked is a 2017 American thriller film directed by Michael Apted and written by Peter O’Brien. The film stars Noomi Rapace, Orlando Bloom, Michael Douglas, John Malkovich and Toni Collette. The film was released in the United Kingdom on May 5, 2017, by Lionsgate.

Rapace plays Alice Racine, a brilliant CIA operative who hasn’t worked in the field since she was unable to prevent a terrorist attack in Paris in 2012. She blames herself and then took a undercover job in London in the guise of a social worker, which gives her insights into possible terrorist plots. Her former boss in the CIA, Eric Lasch, repeatedly tried to get her to come back and work for him but she politely refuses.

However she is called in lead the interrogation of a muslim man who is couriering a message from a radical imam, with a possible terrorist plot and agrees to do the job. However after she breaks him down, she gets a call from the CIA asking her to get the investigation started, she realizes that she is dealing with a rogue element. She gets out of there in the nick of time, managing to kill a few of the rogues but the courier dies in the cross fire. She then does not know whom to trust and goes to her old mentor, but his house is attacked and he is seemingly killed, so she goes to a safe house he had given her the address for. There she is ambushed by more rogues but a burglar, Jack, who just happened to be looting the place, gives her hand and takes her to safety.

With Jack, who tells her he is a former marine and can help, with her she goes to find a contact she has and tried to get info on the imam, but Jack turns out to be a rogue agent and she is attacked by him. She gets away and he is mauled by large dogs, who the contact let loose on him. On the way she is helped by her friend & MI6 boss Emily Knowles and a superior in the CIA Bob Hunter, to uncover the double crosses and plots by rogue elements in the CIA, lead by her mentor Lasch. In the end, she triumphs and outwits Lasch and the white haired mercenary her hired and goes back to her old life.

Unlocked is one of those films which has a really good cast but is let down by a choppy script and storyline.The talents of Collette & Malkovich are wasted in their roles. Still ok for a late afternoon viewing. 6 outta 10!

What are you looking forward to in December?

Truthfully? Nothing much. Well…we do get two three weekends in the month as December 25th and the 1st of January are on Mondays and I usually get weekends off. So that is something to look forward to.

Other than that, I dunno what I could look forward to. It’s going to be a busy month work wise and that isn’t something that anyone will look forward to. This Friday we have a program at work which will last for 3 to 4 hours with dinner. I have to work on Saturday, which is something I am not happy with but hey, as long as I get two days off, it’s fine. So I will be taking Sunday & Monday off.

I might see if we can get a family party together. I dunno, I usually like to have a nice inside party with some relatives. For New Year’s eve, if there is no family get together, I might just get some beer or vodka and order in some food for dad and mom and me and relax for the evening and night and even watch a movie after midnight.

Arsenal boss Arsene Wenger praised “fighter” Mesut Ozil after the German inspired the Gunners to a dominant win against Huddersfield. Ozil scored one goal and provided two assists as Arsenal made it seven wins from seven Premier League home games this season. The midfielder, who has been linked with a move away in January, is showing a different side to his game, according to Wenger. Alexandre Lacazette gave Arsenal an early lead with a confident finish after being put through by Aaron Ramsey’s clever flick. The visitors went close to an equaliser when Petr Cech pushed Steve Mounie’s shot onto the bar not long after the restart.

But Arsenal scored three goals in four minutes to end Huddersfield’s hopes of getting a surprise result. Ozil played a one-two with Alexis Sanchez before the former teed up substitute Olivier Giroud to convert from six yards out. Soon after, Sanchez made it three with a volley from Ozil’s lofted pass. Ozil capped a superb individual display with a goal, placing the ball beyond Huddersfield goalkeeper Jonas Lossl after being put through by Ramsey, before Giroud’s close-range finish in the final minutes completed the rout. Arsenal, who remain fourth, host second-placed Manchester United on Saturday, while Huddersfield drop to 14th. The Gunners had won their 11 previous Premier League games on home soil prior to the visit of Huddersfield, a run stretching back to April.

Against a side that had not won away from home since the opening game of the season, win number 12 for the hosts always seemed likely, a view that was only enhanced when Lacazette struck after just three minutes. The early goal hinted at a long night for the visitors, but Arsenal – initially – failed to build on it. They laboured for more than an hour against a disciplined Terriers side, misplacing passes in defence and leaving gaps that more clinical sides than Huddersfield would have exploited. But when the second goal arrived on 68 minutes, the Huddersfield defence wilted and, with Giroud also hitting the post and Sanchez shooting over from close range, the win could have been even more comprehensive.

The victory for Arsenal, who have now scored 20 goals in seven home games and conceded just four, sets them up nicely for the visit of Jose Mourinho’s side this weekend. Should the Gunners win that game then they will move to within a point of United.