Cafe Coffee Day’s American Classic Burger (Actually Sliders) – chicken cutlet patties, onions, lettuce. I wish Indian restaurants and cafes would stop calling things like American Classic when we could actually go to war with them for this ridiculous named item which falls short. The chicken patties were bland and the score of 6 is a generous one. When we are getting individually owned joints that do an awesome job in making juicy delicious burgers, a big franchise like CCD is making below par stuff. 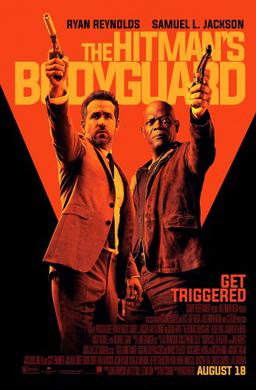 The Hitman’s Bodyguard is a 2017 American action comedy film directed by Patrick Hughes and written by Tom O’Connor, whose script was on the 2011 Black List survey. The film stars Ryan Reynolds, Samuel L. Jackson, Gary Oldman and Salma Hayek, and follows a bodyguard who is hired to protect a hitman who has to testify at the International Criminal Court.

Ryan Reynolds plays Michael Bryce, an ex-CIA agent turned private European Union based executive bodyguard who offers the finest services. He lives a lavish lifestyle and is rich and lives with his girlfriend Amelia Roussel, who has newly joined Interpol, in a nice mansion. However after his important client Takashi Kurosawa, a Japanese arms dealer, is killed at the airport Price falls into disgrace. 2 years later he is a shell of his former self, separated from Amelia and ekes out a living protecting drug-addicted corporate executives in London.

Vladislav Dukhovich, the ruthless and bloodthirsty dictator of Belarus, is put on trial for crimes against humanity at the International Criminal Court. The prosecution is unable to make headway against him, as they are unable to substantiate their allegations with physical evidence and Dukhovich assassinates any witnesses who could do so. The prosecution’s last hope is notorious incarcerated hitman Darius Kincaid, who agrees to testify against Dukhovich in exchange for releasing his wife Sonia from prison. Roussel is picked to lead the transportation of Kincaid, with a convoy of vehicles in which armed French & English agents escort them from Manchester to The Hague. The convoy is ambushed by armed men with guns and explosives and with the exception of Roussel and Kincaid, everyone else is killed.

Roussel and an injured Kincaid head to a safehouse and thinking that Interpol is probably compromised as the attackers knew exactly where and when to ambush them, she takes a risk and calls in Bryce who is reluctant  ultimately agrees to aid them in exchange for the restoration of his reputation. After a brief showdown with Kincaid which reveals that Bryce had multiple conflicts with him in the past, Roussel returns to Interpol to update them on the situation, while Bryce and Kincaid escape an attack by Dukhovich’s men. It is revealed that Roussel’s superior Foucher is the one who is working for Dukhovich and is spying for him. Dukhovich’s men track Kincaid’s location through his cellphone and ambush him and Bryce.

While they are able to fight them off, their vehicle is destroyed. The two hitchhike to a ferry terminal and take a ferry to Amsterdam, where Sonia is being held. Kincaid escapes from Bryce to send flowers to Sonia, and Bryce tracks him down and kills several more hitmen. Kincaid reveals that he killed Kurosawa two years ago, having been at the airport only by chance after another job. Enraged at the revelation that he has spent two years blaming Roussel for “betraying” him when in reality the client’s death was a sheer fluke, Bryce punches Kincaid and then abandons him. Bryce has a couple of drinks as Kincaid is attacked by Dukhovich’s men but has a change of heart and helps out the hitman.

Bryce though is captured and tortured and it is now Kincaid who comes to his aid and rescues him. They make their way to the Hague with seconds to spare and Kincaid provides damning evidence against Dukhovich, who resorts to his backup plan; to bomb the court, allowing him to steal a gun and attempt to kill Kincaid. Bryce jumps in the way of the bullet and orders Kincaid to stop Dukhovich from escaping. Roussel notices Foucher acting suspiciously during the attack, and deduces he was the traitor. She subdues him with Bryce’s aid. Kincaid pursues Dukhovich to the roof of the building, where he attempts to escape by helicopter, but Kincaid dispatched both the helicopter and pushes Dukhovich to his death.

In the aftermath, Bryce is recovered and has rekindled his relationship with Roussel and Sonia is released. Kincaid is rearrested for his previous crimes, but breaks out of HMP Belmarsh so he and Sonia can celebrate their anniversary in the bar in Honduras where they first met. The movie ends with them dancing and then kissing in the midst of all the fighting and chaos taking place at the bar.

Funny in a lot of places and with non-stop banter and fast paced action, this movie delivers on what the trailer promised it would be. Action, buddy elements, guns, explosions and lots of banter and with both leads saying “motherfucker” and “fuck” a lot! It’s senseless fun and entertainment but the difference in this movie, compared to others, is the obvious chemistry between Reynolds & Jackson. 8 outta 10, for the kind of movie it wants to be!