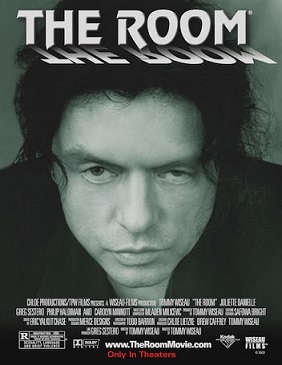 The Room is a 2003 American independent drama film written, directed, produced by, and starring Tommy Wiseau. The film centers on a melodramatic love triangle between amiable banker Johnny (Wiseau), his deceptive future wife Lisa (Juliette Danielle), and his conflicted best friend Mark (Greg Sestero). A significant portion of the film is dedicated to a series of unrelated subplots, most of which involve at least one supporting character, and are unresolved due to the film’s inconsistent narrative structure. The Room has been dubbed as “the Citizen Kane of bad movies”.

Surely it can’t be that bad? – I innocently thought! How little did I know! Over the last few years I have seen clips and reviews and parodies of this movie and recently got to know that James Franco is making a biographical comedy-drama movie about on the creation of The Room, named The Disaster Artist (based from the book by Sestero of the same name) and that coupled with several funny reviews of the movie made me want to watch it. So I watched it last night.

And I laughed, and laughed and laughed. Tommy is terrible, he delivers his lines like an actor who just decided to become an actor and his accent is weird when it turns from American to whatever he actually is (Polish as it could be claimed). He has barely any acting chops and he overacts and over dramatizes things. His direction, story and production is crap. None of the others are any good either. The actress who plays Lisa, Juliette, is terrible and she is given so many repetitive lines to say. “Don’t worry about it” & “I don’t want to talk about it” – the latter after she brings it up! Denny is a creep and Mark is the worst friend ever!

Best acting job is the lady who plays Lisa’s mom – from the most casual way to drop a cancer confirmation to her overacting about Denny’s drug thing. She doesn’t know much about Denny or even like him much but she berates him as if they were mother and son! It’s terrible and it’s funny because it’s terribly done. Lisa is evil, a really bad woman and Mark is a bad friend but no one can feel sympathy for Tommy. It’s so bad it’s good kinda thing here. I will go out on a limb and say this confidently – I can make a way better movie than this but it won’t become a cult classic like this movie has become.

One for the ages. I give this movie 2 outta 10 but 10/10 for being the best worst movie ever. Oh The Room, you are TEARING ME APART!