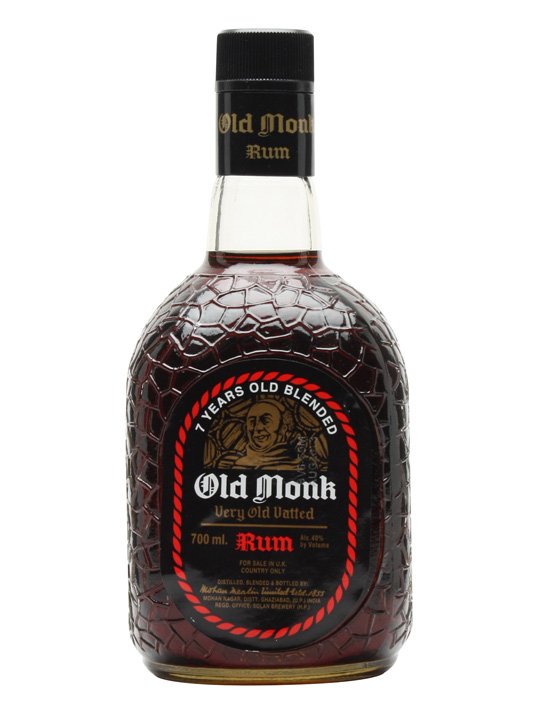 Old Monk Rum was the very first alcoholic drink that I ever drank, other than beer ofcourse. I was 19 and my much older cousin brother gave me two tall glasses of rum+cokes on ice (or was it rum+coke+lime) and I loved the taste. And ofcourse I got tipsy after the 1st glass. After that first taste, I started drinking rum on a weekly or bi weekly basis and Old Monk was my rum of choice.

The choice of most guys in my age group in Kerala (and it seems a lot other Indians agreed too) was Old Monk rum. Rum was cheaper than most other alcoholic beverages. So many evenings or afternoons spent in a bar drinking 3-4 rum+cokes on ice and deep fried beef. Oh those were the days when drinking out didn’t cost you an arm and a leg. Good memories! Cheers to the life of Brigadier (retd.) Kapil Mohan. Thank you, sir.

Burger King’s Chicken Whopper with French Fries and Pepsi. Medium fries is just Rs.10. Why do they have the whopper without cheese? You need to order it separately.

The ‘VAR’ was used but this was more a ‘Very Average Response’ as Chelsea and Arsenal played out a goalless stalemate in the first leg of their Carabao Cup semi-final. The Video Assistant Referee was called upon, to help adjudicate on two penalties claims, one for each side, and it was correct that neither was given even if the sight of the official Martin Atkinson pressing his finger to his ear added to the fans’ confused frustration. Instead it was an encounter which also left Arsenal supporters wondering if Alexis Sanchez will be at the club for the second leg, in a fortnight’s time, after he started on the substitutes’ bench and with a January move to Manchester City appearing increasingly likely.

Arsene Wenger later denied that was the case while confirming that Jack Wilshere, his captain for the night, had suffered yet another injury to add to Arsenal’s worrying roll call of absentees. However the midfielder’s apparent ankle strain, received in blocking a shot, should not keep him out too long. It is hoped. Wenger watched the match from the press box – serving the second game of his three-fixture ban – and was, frankly, more entertaining that what happened out on the pitch, at times. It was a close-by study for reporters on the agonies that a manager goes through as he slammed his desk, kicked the seat in front of him and failed to stifle the odd shout over decisions or his players not being in position even if he was 25 yards away.

By the end Arsenal commendably kept Chelsea at bay and there was also a sense that there is too much of a familiarity about these two teams now. This was their fourth meeting of the season, their fourth draw, but this was a far cry from the thrilling 2-2 draw at the Emirates last week. There were chances. But, crucially, both Chelsea and Arsenal are carrying strikers at present who are suffering from a lack of confidence which was evidenced in the opening two minutes when Alvaro Morata was put through by Eden Hazard only to snatch at the chance and prod the ball into the side-netting.

Chelsea struck the post in the first-half, from a Victor Moses shot, although goalkeeper David Ospina will have felt he had it covered, and did so again late on when Cesc Fabregas’s cross was deflected onto the outside of the goal-frame. The first penalty claim came when Chelsea goalkeeper Thibaut Courtois beat out Iwobi’s powerful shot, after a mistake by Antonio Rudiger who unwisely tried to pass the ball out of his own area to Danny Drinkwater only for it to be intercepted. The rebound fell to Ainsley Maitland-Niles and he attempted to burst past Moses, going down.