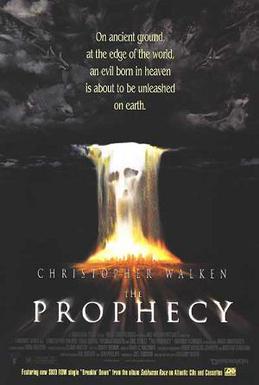 The Prophecy is a 1995 American fantasy horror-thriller film starring Christopher Walken, Elias Koteas, Virginia Madsen, Eric Stoltz, and Viggo Mortensen. It was written and directed by Gregory Widen, and is the first motion picture of The Prophecy series including four sequels. The film tells the story of the Archangel Gabriel (Walken) and his search for an evil soul on Earth, and a police detective (Koteas) who unknowingly becomes caught in the middle of an angelic civil war.

Thomas Dagget, a Catholic seminary student, loses his faith when he sees disturbing visions of a war between angels. Years later, Thomas is a detective with the Los Angeles Police Department. While investigating a homicide, he is visited by Simon, an angel, who warns him of upcoming events. A second fallen angel, Usiel, a lieutenant of the angel Gabriel, is killed in an altercation with Simon. Investigating the disturbance, Thomas finds in Simon’s apartment the obituary of a recently deceased Korean War veteran named Colonel Arnold Hawthorne and the theology thesis about angels which Thomas himself wrote in seminary. Meanwhile, in Chimney Rock, Arizona, Simon finds the dead veteran awaiting burial and sucks the evil soul out of the body.

A dying Simon then hides Hawthorne’s soul in a little Native American girl, Mary, who immediately falls ill and is taken care of by her teacher, Katherine. Gabriel arrives and takes the helps of Jerry, a suicide, in the moment of his death and keeps him in a state of limbo. Jerry is now forced to do the bidding of Gabriel and etrieves Usiel’s belongings from the police station while Gabriel destroys Usiel’s body in the morgue. After finding Usiel’s burnt body, all evidence of its oddity now lost, Thomas hurries to Chimney Rock. Gabriel finds Simon, who refuses to reveal the location of Hawthorne’s soul and has his heart ripped out. Thomas examines Simon’s remains and questions Katherine. In Hawthorne’s home, he finds evidence of war crimes. During the battle of the Chosin Reservoir, Hawthorne’s regiment had massacred a huge number of Chinese soldiers and had ritually sacrificed many others, staking their bodies out. They had also engaged in cannibalism.

Thomas visits a church to reflect and is shaken by a verbal confrontation with Gabriel. He is beginning to understand the nature of the jealous angels who hate humans because God loves them most. Katherine finds Gabriel questioning the kids at the school but she has no idea who he is. After he leaves, she rushes to Mary’s home and finds Thomas there. As Mary’s condition worsens, Katherine takes Thomas to an abandoned mine where she had seen Gabriel. Inside, they find angelic script and experience together a terrible vision of the angelic war. They rush back to Mary’s home, only to find Gabriel and Jerry there. Thomas kills Jerry, who thanks him for the release. Katherine stops Gabriel temporarily when her wild gunshot misses him and blows up Mary’s trailer home. The three protagonists flee to a Native American site where Mary can be exorcised.

Gabriel meanwhile recruits a new unwilling assistant, Rachael, just as she dies of a terminal illness as he needs her because he doesn’t know how to drive. That night, Lucifer confronts Katherine and tells her that “other angels” have taken up this war against mankind, and since then, no human souls have been able to enter Heaven. He knows of Gabriel’s plot to use Hawthorne’s soul to overthrow the obedient angels. He also knows that if Gabriel wins the war under his influence Heaven will ultimately devolve into another Hell, which Lucifer considers “one Hell too many”. The next day, Lucifer appears to Thomas and advises him to use Gabriel’s lack of faith against him. Gabriel arrives and attempts to disrupt the exorcism ritual. Thomas kills Rachel, and he and Katherine fight Gabriel.

Lucifer appears first encouraging the tribe to complete the exorcism. Then he confronts Gabriel telling him that his war is based upon arrogance, which is evil, making it Lucifer’s territory. Gabriel taunts Lucifer about his past when he fell from grace; Lucifer tells Gabriel he needs to go home and rips out his heart. Simultaneously Mary expels out Hawthorne’s soul, a rancid cloud of evil. The “enemy ghost” starts to attack the people but a bright light from Heaven immediately destroys it. With the threat to his evil kingdom eliminated, Lucifer tells Thomas and Katherine to “come home” with him. They staunchly refuse. “I have my soul…and my faith,” declares Thomas. Lucifer drags Gabriel to Hell. As morning comes, Thomas comments on the nature of faith and what it means to truly be human.