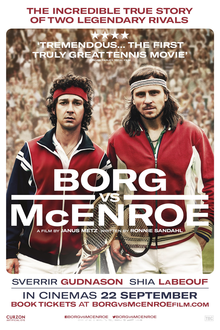 I was a little less than a month short of turning 4 when this great match took place and as I ofcourse wasn’t into tennis back then, I never watched it. Around 1987 I first watched Wimbledon and became hooked to the sport (though I stopped following the sport by the year 2000 and football once again became numero uno in my life). We have a sports magazine called SportsStar in India and I was a subscriber for the next 8 years as I wanted my monthly tennis fix, other than watching it on tv and reading about it in the papers.

Around 1988 I became fascinated with Bjorn Borg, though he had retired a couple of years before that, and I even asked my dad to buy me his 1980 autobiography “My Life & Game”, co-authored by writer Eugene L. Scott. It was a look into his life, childhood and his years at the top of the men’s game which sadly ended prematurely at the age of 26 in 1982. He was an icon – and still is – for the sport. The movie focuses a lot on Borg’s state of mind during that Wimbledon, with all the pressure on him as he went for an unprecedented 5th consecutive men’s singles title. His heavily anticipated final with his rival McEnroe was one for the books.

It’s a must watch for all fans of the sport of tennis and those of us who remember Borg as the ultimate professional. The Ice Borg had cracked under pressure many times but he held it together in public. A 7.5 outta 10!