Arsenal right-back Mathieu Debuchy has joined Saint-Etienne on a free transfer after his contract was terminated. The France international has signed a deal with the Ligue 1 side until the end of the season. Debuchy, 32, joined the Gunners from Newcastle in July 2014 but made just 29 appearances for Arsene Wenger’s side due to several long-term injuries. His last appearance was the FA Cup third round defeat by Nottingham Forest earlier this month.

He spent the second half of the 2015-16 season on loan at Bordeaux, but then struggled to recover from a long-term injury. This season he made seven starts, all in cup games. Debuchy joined Arsenal from Newcastle in 2014 after starting for France in that summer’s World Cup, but never regained his starting place after suffering a dislocated shoulder in January 2015.

Chelsea have signed Arsenal striker Olivier Giroud on an 18-month deal for about £18m. France international Giroud, 31, leaves Arsenal having scored 105 goals in 253 games since signing from Montpellier for a reported £12m in June 2012. Borussia Dortmund have also confirmed a deal to sign Chelsea forward Michy Batshuayi until the end of the season. Earlier on the closing day of the winter transfer window, Dortmund sold Pierre-Emerick Aubameyang to Arsenal. “Chelsea is one of the biggest teams in the Premier League – they have won maybe the most trophies in the last six or seven years,” Giroud said in a statement.

“It’s a massive club and I am proud to sign for Chelsea, and I’m looking forward to playing. “Giroud’s final appearance for Arsenal was as a substitute in Tuesday’s 3-1 defeat by Swansea. After his move to Chelsea was confirmed, Giroud thanked Gunners fans for their part in a “beautiful story” after “five and a half amazing years within the Arsenal family”. “I would like to especially thank the fans for their unconditional support upon my arrival,” he wrote on Twitter. Arsenal manager Arsene Wenger paid tribute to Giroud’s “great service” to the club.

“He never let us down on the commitment front and he saved us many times,” the Frenchman said. “We signed him from Montpellier and he became a strong, regular international player for France, and we have gone together through good and bad. But always I believe that his behaviour has been top, top class. “He always had his heart 100% in the team and he was committed.” Belgium international Batshuayi, 23, has made 32 league appearances for Chelsea since joining the club from Marseille in July 2016, scoring seven goals.

Chelsea also held talks with Tottenham over a possible swap deal involving Spurs’ Spanish forward Fernando Llorente – but Batshuayi rejected the move as he wanted to be a first-choice striker. In a statement Batshuayi said he was moving to the German club to help achieve his “big goal” of playing at the 2018 World Cup in Russia. “In order to reach my big goal, I want to play as much as I can and score many goals,” he said. Dortmund travel to Cologne for their next Bundesliga match on 2 February.

Arsenal have signed Gabon striker Pierre-Emerick Aubameyang from Borussia Dortmund for a club record £56m. The Gunners had two bids for Aubameyang rejected by Dortmund before agreeing a fee that eclipses the £46.5m they paid for Alexandre Lacazette in July. Arsenal said the 28-year-old – the 2015 African Footballer of the Year – had joined on “a long-term contract”. Dortmund agreed to the sale after striking a deal to sign Chelsea forward Michy Batshuayi on loan.

Aubameyang said: “I’m really happy to be here in this great team. “The club has such a big history and great players like Thierry Henry. He’s an example for us strikers. I’m a fast player and I score goals too, like Henry a little bit. I think I have to work a lot to be like him, but I will do. “I hope that we will come back to the top as soon as possible. I will do my best to join in.” Aubameyang scored 141 goals in 213 games for Dortmund, including 21 in 24 matches this season. But he was suspended by the German club for their match against Wolfsburg on 14 January for missing a team meeting. 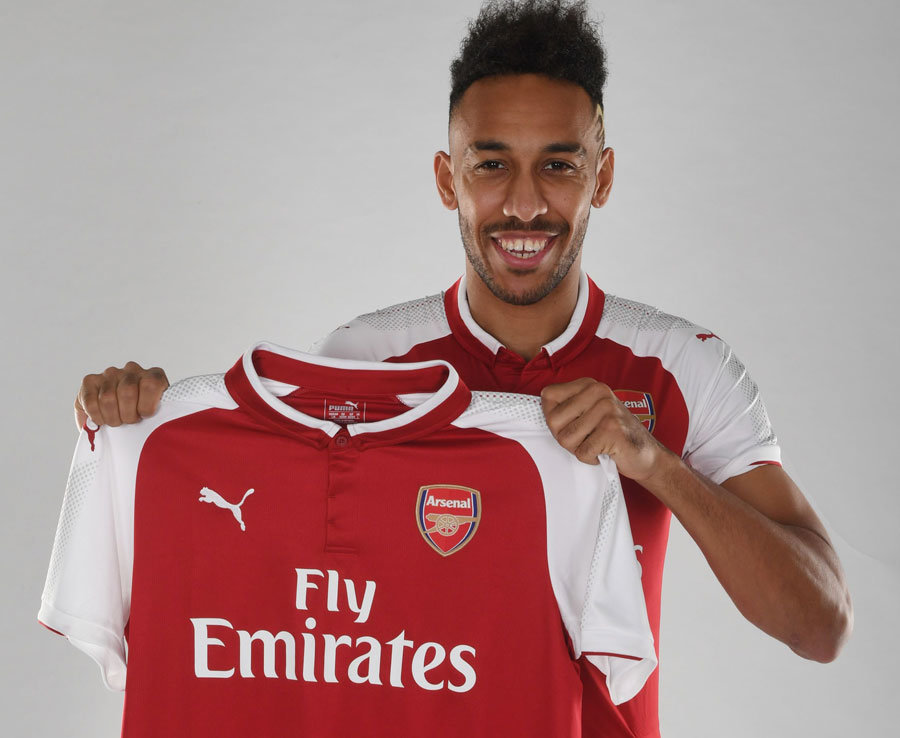 The forward was also left out of the squad for their next game game at Hertha Berlin because club officials felt he was not focused enough, but he played 90 minutes in Sunday’s 2-2 draw with Freiburg. After his move to Arsenal was confirmed, Aubameyang called himself “a crazy kid” in a message to Dortmund fans posted on Instagram, also apologising for the manner of his departure. “First of all, sorry for everything that has happened in the last month, but I already wanted a transfer last summer, it did not work out, but now it had to be,” he said. “Maybe it was not the best way for me to choose, but everyone knows that Auba is crazy – and yes, I am a crazy kid. “I’ve made mistakes, but never with malice.”

Aubameyang – who will wear the number 14 shirt at Arsenal – joined Dortmund from French club Saint-Etienne in 2013. The only major trophy he won at Dortmund was the German Cup in 2017. He was named Bundesliga player of the year in 2016, and last season was the German top flight’s most prolific scorer with 31 goals. He has played 56 times for Gabon, scoring 23 goals. He averaged 116 minutes per goal in his time in the Bundesliga, a rate only Bayern Munich’s Robert Lewandowski bettered in the same period (107 minutes per goal). He contributed to 172 goals in 213 matches in all competitions for Dortmund, averaging a goal or assist every 96 minutes. He scored 66 goals more than any other Dortmund player since his debut in July 2013.