Write About Your First Crush

In 1989 I met this girl named Sofia who had just moved to my school. She was a class ahead of me but about 2 years older. She had fair skin, curly brown hair and she was tall. Taller than me too! But I had this magnificent crush on her. Probably my first real crush. I remember all those feelings I had for this girl. And it was love at first sight for me. I remember I had just turned 12 and I met her as she was one of the new girls in the school where boys to girls ratio was around 5:1.

I was in the 8th grade and she was in the 9th, so I was 13 and she was 15 at the time. She never talked to many folks at the school which made it hard for me to muster up the courage to go and talk to her but I got a chance when I was picked to be part of this choir / group singing thing for our school’s annual day celebrations and so for 2 months I was with her during the practice hour each day. I even managed to ask her for her number and spoke to her a few times.

Ofcourse nothing came of it and she told me that I was younger than her and so it wasn’t something she would be interested in. I wasn’t very heartbroken or anything really as she soon left the school (no idea why) and I lost touch. About 5 years later I saw her while I was waiting for the bus and shouted her name and she smiled in recognition and that was the only other time I have ever seen her. I used to have the song Street of Dreams by Rainbow as “our” song and I would play this song and imagine it was me singing to her, while she danced around me in a white sweater and a grey skirt! I remember it so well even it was almost 30 years ago!!!

Yesterday I finally went back to Lulu Mall again and my first movie in a theatre in well over 2 months. The last one was Justice League in November! That just won’t do. So anyway, back on Feb 1st we knew that Black Panther would be releasing in Lulu PVR theatres on the 16th. My cousin Sujith, who is my usual movie going companion, and I had agreed to go and watch the film together if he had Saturday off (his work, though in the same company, gives him rotating days off while mine is Sat/Sun fixed).

So after leaving from the office at almost 5am on Saturday morning I came home and watched tv for a bit and then slept till 11pm. I woke up and had a bit to eat and then downed some coffee to wake me up. I ironed my shirt by 1:30 pm, shaved and took a shower and left home by 2:30 pm. I reached Lulu Mall by 3pm just in time to have a quick small chicken kebab wrap for lunch and a Sprite at McDonalds in Lulu Mall. Sujith joined me at a quarter past 3 and he drank a coke and we waited till 20 minutes to 4pm. 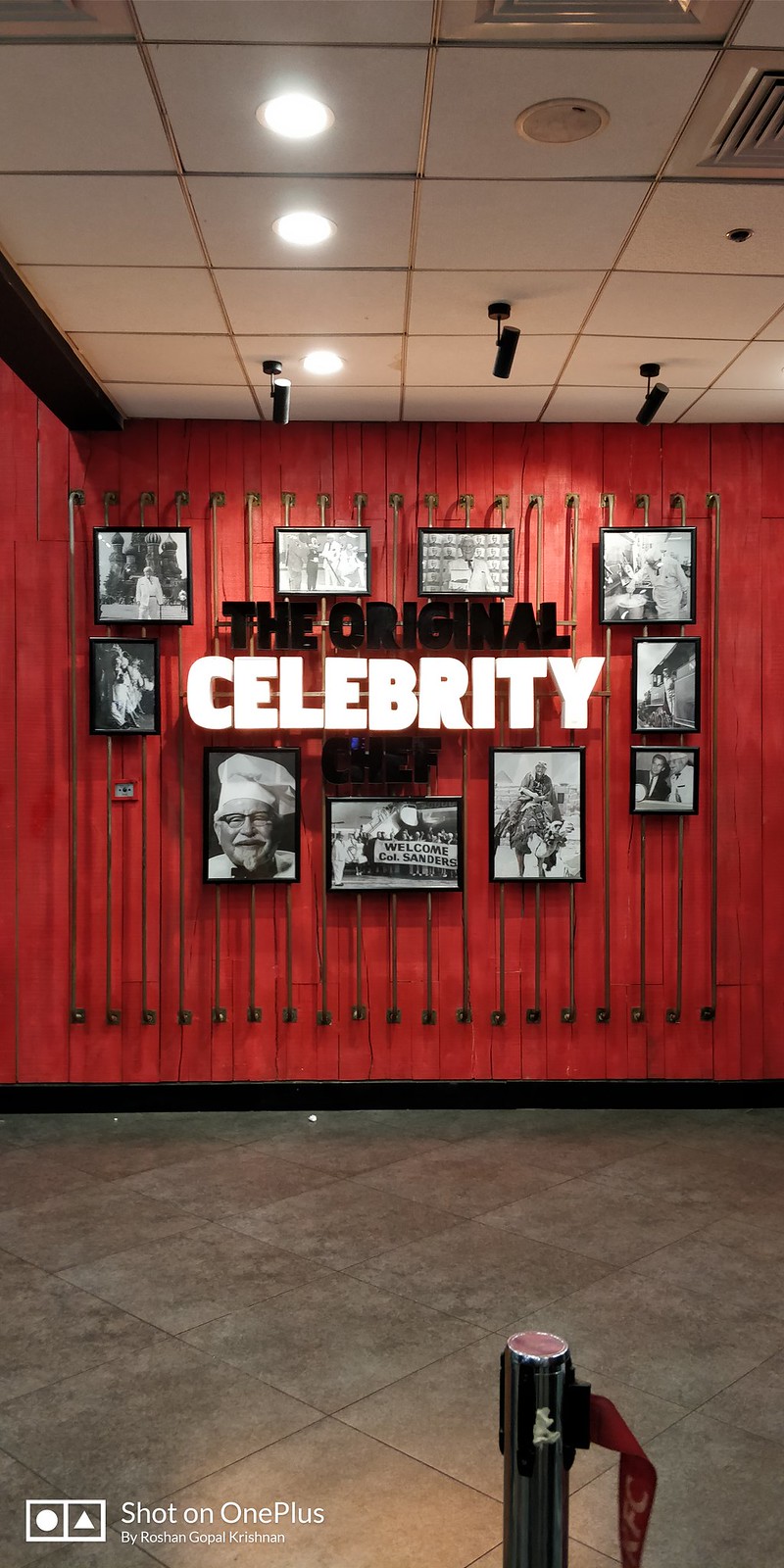 After that we quickly ensured that we don’t get bothered during the movie by visiting the loo and then went to the theatre, showed the booked tickets on my phone and talked till 5 minutes before 4pm where we ordered some popcorn and 7ups and went inside to relax on the big recliners. We got our drinks and snacks brought to us post the playing of the national anthem and then settled in to enjoy the movie.

Post the movie we walked around the large top floor and settled on KFC for an early dinner. Sujith said it’s been ages since he had been to one and the last time we tried going to the KFC restaurant in Lulu Mall there was a huge crowd there. This time it was a decent size crowd and we managed to get to the counter in 10 minutes. We ordered a 6 piece bucket that also comes with French fries and we got Pepsis. We chatted and ate our fries and chicken and drank the cola as we chatted about the movie. After that we had ice creams from Baskin n Robbins and then left for our homes.

Black Panther is a 2018 American superhero film based on the Marvel Comics character of the same name. Produced by Marvel Studios and distributed by Walt Disney Studios Motion Pictures, it is the eighteenth film in the Marvel Cinematic Universe (MCU). The film is directed by Ryan Coogler from a screenplay by him and Joe Robert Cole, and stars Chadwick Boseman as T’Challa / Black Panther, alongside Michael B. Jordan, Lupita Nyong’o, Danai Gurira, Martin Freeman, Daniel Kaluuya, Letitia Wright, Winston Duke, Angela Bassett, Forest Whitaker, and Andy Serkis. In Black Panther, T’Challa returns home as king of Wakanda but finds his sovereignty challenged by a long-time adversary, in a conflict that has global consequences.

Apparently Wakanda, formed around a mountain where a meteorite of the alien metal vibranium crashed centuries ago, has 5 tribes that went to war with each other in order to rule Wakanda. A warrior ingested a “heart-shaped herb”, that was affected by the metal, and gained superhuman abilities. He became the first “Black Panther”, and united the tribes to form the nation of Wakanda, though the Jabari Tribe chose not to follow the Black Panther’s rule. Over time, the Wakandans used the vibranium to develop highly-advanced technology and chose to isolate themselves from the rest of the world by posing as a Third World country.

In 1992 Prince N’Jobo, who has abandoned Wakanda after became convinced that Wakanda’s isolationist policies had done more harm than good, and vowed to share its technology with people of African descent around the world in order to help them conquer their oppressors, is confronted by his brother, King T’Chaka, then the Black Panther. When N’Jobo threatens the undercover agent Zuri, T’Challa is forced to kill his own brother and leaves his nephew, who was born to N’Jobo and his American wife, on his own as an orphan. In 2018, T’Challa is taking his role as king after his father’s death when, as part of the ceremony, he is temporarily stripped of his powers, and the Jabari Tribe’s leader M’Baku challenges T’Challa for the crown, but T’Challa defeats M’Baku in ritual combat, becoming the new king. He allows M’Baku to live.

T’Challa is joined at the ceremony by his mother, the current Queen Ramonda and younger sister Shuri as well his General Okoye and Nakia, a spy and his love interest. Ulysses Klaue, a black market arms dealer who N’Jobu had enlisted to infiltrate Wakanda and steal a cache of vibranium, had recently surfaced to sell a stolen Wakandan artifact to a buyer in Busan, South Korea, T’Challa’s closest friend W’Kabi—who lost his parents as a result of Klaue’s actions—urges him to bring Klaue to justice. T’Challa, Okoye & Nahia go to a nighclub in Busan to capture Klaue and run into CIA agent Everett K. Ross, who is posing as the buyer to apprehend Klaue. Klaue tells Ross that Wakanda’s international image is just a front for a technologically advanced civilization, before being broken out by Erik, now an ex-U.S. black ops soldier who goes by the name “Killmonger”.

Ross is seriously injured during the attack, and T’Challa decides to take him to Wakanda where their technology can save him rather than pursue Klaue. Shuri heals Ross with vibranium, while T’Challa confronts Zuri about N’Jobu. Killmonger kills Klaue and takes his body to Wakanda as a token, revealing his identity to the tribal elders and challenging T’Challa for the throne. He challenges T’Challa to ritual combat; during the battle, Zuri begs that he be killed in T’Challa’s place, so Killmonger kills him. Killmonger defeats T’Challa and hurls him over a waterfall. Killmonger is fed the heart-shaped herb, giving him the power of the Black Panther, and orders that the remaining heart-shaped herbs be incinerated. Nakia manages to extract one herb before the rest are burnt. Killmonger enacts his father’s plan and prepares shipments of Wakandan weapons to be distributed to operatives around the world, supported by W’Kabi and his army.

Nakia takes Ramonda, Shuri and Ross to the Jabari tribe where the group finds a comatose T’Challa, rescued by the Jabari in repayment for him sparing M’Baku’s life. Healed by the heart-shaped herb brought by Nakia, T’Challa requests that M’Baku provide his aid to defeat the usurper to the throne, but M’Baku declines. T’Challa returns to Wakanda to complete his combat with Killmonger, as he had neither surrendered nor died. Killmonger commands W’Kabi and his army to attack T’Challa. While the Dora Milaje are initially loyal to Killmonger, they become disgusted with his actions and battle him, causing him to reveal he had stolen a Black Panther suit for himself. In the battle (with huge rhinos wearing vibranium armour) Shuri and Nakia fight alongside the Dora Milaje, while Shuri instructs Ross to remotely pilot a jet to shoot down the planes carrying the vibranium weapons before they can leave the country. M’Baku and the Jabari eventually arrive to fight alongside T’Challa.

T’Challa and Killmonger fall into Wakanda’s vibranium mine and continue to fight below. Okoye tells W’Kabi, her husband, that she who would kill him before abandoning the throne, causing him and his army to surrender. T’Challa uses sonic mining technology to temporarily disrupt Killmonger’s suit and fatally stab him. Killmonger declines an offer to be healed and imprisoned, choosing instead to die free as he watches the sun set over Wakanda. Rejecting Wakanda’s isolationism, T’Challa establishes an outreach center in Oakland to be run by Nakia and Shuri. In a mid-credits scene, T’Challa appears before the United Nations to reveal Wakanda’s true nature to the world. In a post-credits scene, Shuri continues to help Bucky Barnes with his recuperation.

I really like the movie but the fight scenes between T’Challa and his cousin Eric leaves a lot to be desired as it was dark and the CGi was choppy. Perhaps the fact that I was watching it in a PVR screen where they don’t do dark scenes well also is to blame but the fighting left me feeling unfulfilled. There’s a lot more to the film and it was done well. 8 outta 10!