Pacific Rim Uprising is a 2018 American science fiction film directed by Steven S. DeKnight (in his feature-film directorial debut) and written by DeKnight, Emily Carmichael, Kira Snyder, and T.S. Nowlin. It is the sequel to the 2013 film Pacific Rim, with Guillermo del Toro, director of the original, serving as a producer here. The sequel stars John Boyega (making his producer debut) as well as Scott Eastwood, Cailee Spaeny, Jing Tian, Adria Arjona, and Zhang Jin, with Rinko Kikuchi, Charlie Day, and Burn Gorman returning from the original film. Set in the year 2030, the plot follows humanity needing to again fight Kaiju, giant monsters set on destroying the world.

Set 10 years after the events of the 2012 film,  former Jaeger pilot Jake Pentecost–son of Kaiju War hero Stacker Pentecost–makes a living by stealing and selling Jaeger parts on the black market. While trying to steal part of a disabled Jaeger’s power core, he and teenager Amara Namani (who stole the core to power her homemade and much smaller Jaeger, Scapper)  is arrested by the Pan-Pacific Defense Corps. His adoptive sister and PPDC General Secretary Mako Mori gives Jake a choice between prison and returning to the PPDC as an instructor. Both Jake and Amara, who is recognized for her talent, are taken to the PPDC where Jake starts training Jaeger program recruits with his estranged former co-pilot Nate Lambert. Nate and his sister reveal to him that the Jaeger program is threatened by Shao Corporation’s drone program, which offers to mass produce remote controlled Jaegers developed by Liwen Shao and Dr. Newt Geiszler.

Mako is due to deliver a final assessment to determine the authorization of the drones at a PPDC council meeting in Sydney, but is killed by rogue Jaeger Obsidian Fury before she can report. The drone program is authorized and before her death Mako reveals the location of a defunct Jaeger production facility in Russia, which she suspects Obsidian Fury is using as a base of operations. Before Jake and Nate can investigate the area in their own Jaeger, Obsidian Fury destroys the complex and engages them in battle. Upon destroying its reactor, they find that Obsidian Fury was controlled by a Kaiju’s secondary brain. Later, the drones are taken over by cloned Kaiju brains and simultaneously attack Shatterdomes worldwide, inflicting heavy casualties on the PPDC forces and incapacitating almost all Jaegers. Hermann Gottlieb seeks out Geiszler for help, unaware that Geiszler is the mastermind behind the attack, as he has been corrupted by regularly drifting with Kaiju brains.

Seeking to destroy the world for the Precursors, the alien race who created the Kaiju, Geiszler has installed a backdoor in the drone program so that the Kaiju brains could take over the drones, destroy the PPDC and open new breaches all over the world. Although Shao is able to destroy the drones, three powerful Kaiju successfully emerge from the Breaches and unite in Tokyo. The team realizes that the Precursors’ goal is to activate the Ring of Fire by having the Kaiju fall into Mount Fuji, where their blood will react with the volcano’s rare earth elements and activate all of the volcanoes volcano in the ring of fire, wiping out all life on Earth and terraforming the planet for their colonization. Using the recruits and 4 jaegers, the team launch an attack at the the Kaiju, Geiszler merges them into one gigantic beast that quickly overpowers the team. The PPDC use Gipsy Avenger, the last operational Jaeger to destroy the Kaiju with a rocket designed by Shao. In the aftermath, Geiszler is taken into custody by Nate.

The captive Geiszler threatens that his masters will attack the world over and over again. Jake replies that next time, humanity will be the ones attacking the Precursors. Setting up what could be an awesome third movie, which could be made if this movie is successful. I must admit, initially I was not impressed with the movie as it looked and felt like so many other films. The original movie was much better but in the second part of the film, things picked up and the action is riveting. Albeit the actors do look cheesy with all the stuff they have to do but it was fun. No characters really stand out. I’ll give it a 7 outta 10! 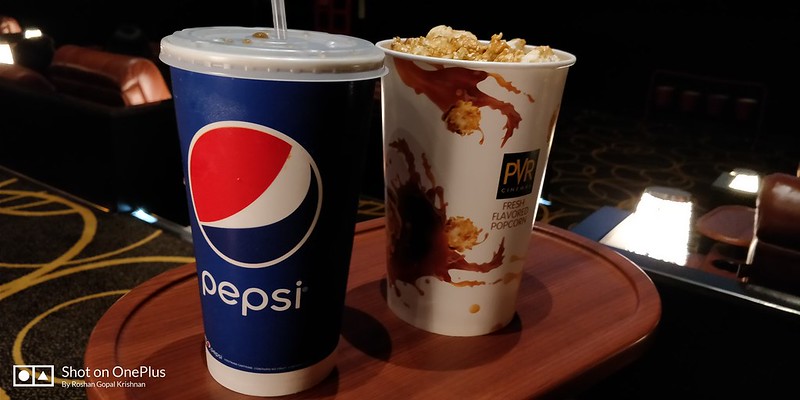 So here I am in the beginning of a staycation. Yeah, no warning eh? Totally out of the blue eh boys and girls? Well I was planning one a few days ago as we got to know the schedule of a major ramp at work. That ramp will mean long working hours and we (atleast the 6-7 people) in my department won’t be able to take leaves in the middle from April 6th till the end of June.

So I applied for and got some leave. I am on leave from today till the 2nd of April. A total of 9 days including two Saturdays and two Sundays off and with the next Friday being a holiday it’s actually only 5 days leave but 9 days vacation. Well, I may have to go in to work on Thursday if the two calls and 1 meeting are taking place. Most probably they will and so I won’t count that day.

So today after I woke up at 12 pm I had coffee and then dilly dallied for an hour or so before I went to take a shower and shave and got ready to leave the house just before 2pm. With no breakfast or lunch I left to go to Lulu Mall for the 3 pm movie showing of Pacific Rim : Uprising. I had a large Coke and a small Caramel popcorn as I was starving by then. Once the movie was over, I went to have a late lunch and then bought a few things and then came home. The next two days will see me relaxing at home doing nothing.