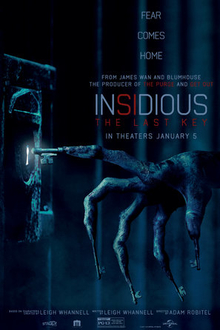 Insidious: The Last Key (also known as Insidious: Chapter 4) is a 2018 American supernatural horror film directed by Adam Robitel and written by Leigh Whannell. It is produced by Jason Blum, Oren Peli, and James Wan. It is the fourth installment in the Insidious franchise, and the second in the chronology of the story running through the series. Starring Lin Shaye, Angus Sampson, Leigh Whannell, Spencer Locke, Caitlin Gerard, and Bruce Davison, the film follows parapsychologist Elise Rainier as she investigates a haunting in her childhood home.

The movie is set chronologically second in the series, years (I guess) after the events of the 3rd movie and the ending connects a full circle back to the first film. Elise is asked to help a man who contacts her with a ghostly infestation in his house that he recently bought. When she takes down the address, she is shocked to find out that the man lives in her old childhood home. As a child she could see spirits which her abusive father forbade her to do but which her mother Audrey encouraged. After an incident which scared her younger brother, Elise’s father locked her in the basement as punishment where Elise to a door which she unlocks. A demon called “Key Face” comes through the door, possessing Elise. Audrey investigates, finding Elise, but the entity kills Audrey by hanging her. Elise comes out of the possession as Gerald arrives, finding Elise and Audrey’s body.

Along with Specs & Tucker, Elise investigates the house A female ghost appears and attacks Elise, shouting “help her”, before vanishing with the whistle. Elise tells them that she has seen her before, as a teenager. Elise saw the ghost in their laundry room. Gerald investigated and said he saw nothing. Fearing another beating, Elise fled the house and abandoned Christian. The next morning, Elise, Tucker, and Specs visit a diner, meeting sisters, Melissa and Imogen. Christian joins them, and they learn that the girls are Christian’s daughters and Elise’s nieces. Christian is still furious at Elise for abandoning him and storms out. Hoping to repair their relationship, Elise hands Melissa a photo of the whistle, telling her to show it to Christian. That night, Elise and Tucker hear the whistle being blown downstairs.

Elise follows the sound into the basement, where she realizes it is coming from behind a wall. Elise asks a series of questions and learns that what she is looking for is behind the wall. Elise sees that the wall is a door and rushes to her bedroom to get the keys. Behind the door, she finds a bloodied girl with a chain around her neck. Ted storms into the room and it’s shown that he was keeping the girl against her will. He locks the group in the room and tries to kill Specs, but he tricks Ted, and kills him with a bookcase. The police rescue the group and Elise is taken in for questioning. Christian and his girls go to find the whistle. Melissa is lured into the basement and is attacked by “Key Face”. The entity sticks two keys in Melissa, one steals her voice, and the other takes her soul and sends her into a coma. During the questioning, Elise is startled by a vision of Melissa, realizing she is in danger. Elise, Tucker and Specs find Melissa in the basement.

Christian demands that Elise stay away and Melissa is taken to the hospital. Imogen tells Elise that she can also astral project into The Further. Elise tells Imogen she intends to save Melissa by defeating Key Face once and for all, thereby ridding the house of the evil entities.  In a flashback, Elise saw Anna in the laundry room. She was actually alive and escaped from the room she was locked in. When Gerald walked in, he saw Anna, but pretended that he saw nothing. After Elise ran away, Gerald brutally killed Anna. While Elise examines a suitcase, she’s ambushed by Key Face, who takes her into The Further, leaving her unconscious body in the real world. Imogen helps her and they fight Key Face and Audrey’s spirit arrives to help them defeat them.

Melissa’s spirit returns to her body in the real world, saving her life. Elise makes amends with her Mother and says goodbye. Elise and Imogen return to the real world and reunite with Melissa and Christian at the hospital. Christian forgives Elise and she gives him the whistle, and she goes home to California. In her sleep, Elise sees a vision of Dalton, with the Red-faced demon looming over him, and she wakes up startled. Her phone rings. A woman, Lorraine, calls for help for her grandson, Dalton. Elise helped her with her son Josh years earlier and she agrees to help Dalton.

Although I like the story line, the movie itself suffers from the actual execution. The scares are predictable and repetitive and the cast isn’t very effective. Lin Shaye is excellent in her role for the 4th film. Even the jokes fall short. 6.5 outta 10!