So for yesterday I had booked tickets for my cousin and I at Lulu PVR’s 7:30 pm showing of Deadpool 2. We agreed to meet at around 6:30 pm. I reached about 20 minutes before that and went to the top floor food court to see if I could get a drink. In a few minutes he reached and called me saying that he wanted some ice cream before the movie. So I said sure and we went to the Merriboy stall and ordered some Death by Chocolate sundaes. We had to go an ATM counter to get some money out as their machine was down. 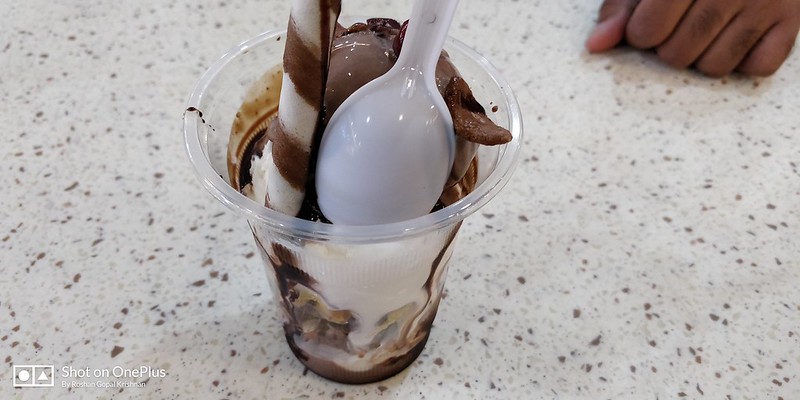 We still had 30 minutes before the movie started after we finished our sundaes so we quickly visited the loo and then went to the PVR lounge. We ordered cokes and popcorn and then settled into our recline seats and waited through the trailers and ads and the National anthem. The hilarity then ensued. 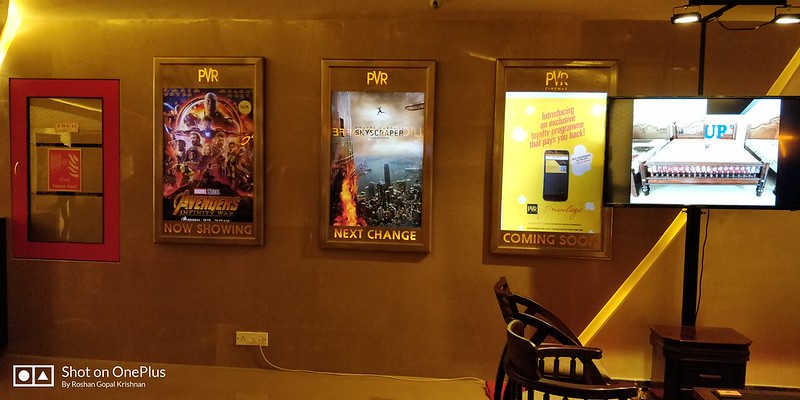 After that we went to the Dominos stall to split a pizza with a couple of chicken wings each but I got severe cramps on my right thigh that hurt like hell. I tried walking it off but it took about 10 minutes to get it back to normal. We ate dinner quickly and then went to get our rides back to our homes.

Deadpool 2 is a 2018 American superhero film based on the Marvel Comics character Deadpool, distributed by 20th Century Fox. It is the eleventh installment in the X-Men film series, and a sequel to the 2016 film Deadpool. The film is directed by David Leitch from a script by Rhett Reese, Paul Wernick, and Ryan Reynolds, with Reynolds starring in the title role alongside Josh Brolin, Morena Baccarin, Julian Dennison, Zazie Beetz, T.J. Miller, Brianna Hildebrand, and Jack Kesy. In the film, Deadpool forms the team X-Forceto protect a young mutant from Cable.

More violent and more funny with lots of inappropriate humour that leaves you laughing all the movie through, Ryan Reynolds is back as the Merc with the mouth. For the past two years he has been working as a mercenary killing his targets in all sorts of violent ways. On his anniversary with Vanessa, as they start to plan their family, one of the targets he missed, tracks them down and kills Vanessa (by accident; the bullet was meant for Wade). Wilson kills the man in revenge, but blames himself for her death, and attempts to commit suicide six weeks later by blowing himself up. Wilson has a vision of Vanessa in the afterlife, but the pieces of his body remain alive and are put back together by Colossus. Wilson is left with only a Skee-Ball token, an anniversary gift, as a final memento of Vanessa.

As a sort of healing, Wade joins the X-men reluctantly and Colossus, and Negasonic Teenage Warheadrespond to a standoff between authorities and the unstable young mutant Russell Collins / Firefist at an orphanage, labeled a “Mutant Reeducation Center”. Wilson realizes that Collins has been abused by the orphanage staff, and kills one of the staff members. Colossus stops him from killing anyone else, and both Wilson and Collins are arrested. Restrained with collars that negate their powers, they are taken to the “Icebox”, an isolated prison for mutant criminals. Meanwhile, a cybernetic soldier from the future, Cable, whose family Collins murdered, travels back in time to terminate the boy before Collins ever becomes a killer. Cable breaks in to the facility and fights Wade, whose collar breaks off in the melee. He attempts to defend Collins, but Cable defeats him and takes Vanessa’s token. Wilson forces himself and Cable out of the prison, but not before Collins overhears Wilson deny that he cares for the young mutant.

Near death Wade has another vision of Vanessa who urges him to help the kid. Wilson organizes a team of mutants he calls X-Force to break Collins out of a prison-transfer convoy and defend him from Cable. The team launches its assault on the convoy by parachuting from a plane, but all of the team-members except for Wilson and the lucky Domino die in the landing. While the pair fight Cable, Collins frees fellow inmate Juggernaut, who repays Collins by agreeing to help him kill the abusive orphanage headmaster. Juggernaut destroys the truck he and Collins are in and they escape. Cable offers to work with Wilson and Domino to stop Collins’ first kill, which will lead to more. He agrees to give Wilson a chance to talk Collins down before attempting to kill the boy again.

At the orphanage Juggernaut overwhelms them until Colossus, Negasonic Teenage Warhead and her girlfriend Yukio arrives to distract the huge monster. After Wilson appears to fail in talking down Collins, Cable shoots at the young mutant. Wilson leaps in front of the bullet and dies, reuniting with Vanessa in the afterlife. Seeing this sacrifice on his behalf, Collins does not kill the headmaster. This changes the future, in which Cable’s family now survives. Cable uses the last charge on his time-traveling device, which he needed for returning to his family, to go back several minutes and strap Vanessa’s token in front of Wilson’s heart before they arrive at the orphanage. This time, when Wilson leaps in front of the bullet it is stopped by the token and he survives. Collins still has his change of heart, while the headmaster is run over by Wilson’s taxi-driver friend Dopinder.

In the mid-credits scene Negasonic Teenage Warhead and Yukio repair Cable’s time-traveling device for Wilson. He uses it to save the lives of Vanessa and X-Force member Peter; kill X-Men Origins: Wolverine‘s version of Deadpool; and kill actor Ryan Reynolds while he is considering starring in the film Green Lantern. Fucking hilarious – I am trying to think of another movie during which I laughed so hard recently and I am failing. Everyone in the theatre was rolling in the aisle with mirth. It is so damn funny. Such inappropriate humour and it works so well. 9.5 outta 10!