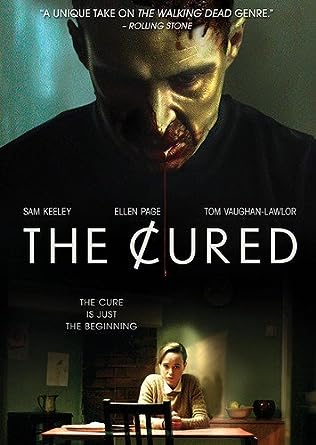 The Cured is a 2017 horror drama film written and directed by David Freyne. It stars Ellen Page, Sam Keeley, Paula Malcomson and Tom Vaughan-Lawlor. Set in Ireland it shows the aftermath of a plague caused by a virus that leaves the infected in a zombie like stage, making them aggressive and cannibalistic.  The Maze Virus, had swept through Europe until a cure was found and 75% of the infected were able to be treated and they can become normal humans again. However, they remember what they did during their time as a zombie and it affects them even after they are cured. The remaining 25% of the infected stay in the same stage and are resistant to the cure.

5 years after the outbreak Senan, who is cured is sent out into the regular world and his widowed sister-in-law Abbie agrees to take him. She also has her young son Cillian who though initially does not take to Senan, later bonds with him while playing games. Senan doesn’t tell Abbie that her husband, his brother, was killed by him just after he got infected. Also released the same day as Senan is Connor, who was a promising politician, a friend of Senan who was the one who infected him. Connor is rejected by his father as he had killed his own mother while in the zombie stage.

Senan takes a job at the hospital where the Resistant are housed, and observes that the Resistant show no interest in attacking the Cured. This is a source of political tension in the community, as the never-infected suspect aloud that the Cured would love to see another outbreak of the Maze Virus, as they would be largely immune to its effects. Senan reluctantly joins Conor’s group of Cured people as they are shunned by society and are subjected to hatred. When a mission goes wrong and a military man is killed Sergeant Cantor, who is their rehabilitation officer, suspects Conor and Senan and he informs Abbie about them. Conor tells Abbie that he infected Senan and the later killed his brother,

Confronting Senan who admits this, Abbie throws him out.  It is announced in various news broadcasts that the government is planning to euthanize the 25% (5000 patients) who are Resistant, despite the assertions of a prominent virologist that a better vaccine for the Resistant is nearly developed. Senan assists Cantor in a sting operation to arrest Conor after he confesses aloud to the arson; however, Conor violently murders Cantor and flees after showing a rare emotional outburst, blaming Senan for betraying him. Conor and the Cured Alliance set in motion a drastic plan to free the Resistant from their cellblock and the infected start attacking the people in the streets and their homes.

Senan finds Abbie, who is frantically trying to retrieve Cillian from his school. Senan rescues Cillian but is confronted by Conor, who beats him savagely. A soldier shoots Conor but he escapes and his fate is unknown. Senan, Abbie and Cillian return to their apartment, but Cillian is bit by an infected and begins showing immediate signs of infection. Senan, knowing he is immune, takes Cillian, and tells Abbie he will keep him safe until another vaccine is available. Some semblance of order returns an unspecified time later as Abbie watches the news waiting for some news of her son.

Dull, boring and leaves you not rooting for anything or anyone in particular. I wanted to watch the movie for seeing Ellen Page. It’s an unmemorable film in a field of zombie flicks, numerous of which are vastly superior. 6 outta 10!

McDonald’s Crunchie McFlurry – the usuall McFlurry with some coookie crumbles in it. Pretty smooth and refreshing and not too sweet. Love it!