Manchester City boss Pep Guardiola says his side will get even better as they deservedly beat Arsenal on the opening day of the Premier League season. The Gunners were playing their first competitive game without Arsene Wenger in charge since 1996 but were well beaten by the defending champions. Raheem Sterling put City ahead in the 14th minute when he got the ball on the corner of the box, cut beyond two players and rifled home from 20 yards.

Riyad Mahrez went close to scoring on his league debut for City when his free-kick was saved by Petr Cech, who denied Aymeric Laporte from the follow-up. It was always going to be a tough first game for Unai Emery at Arsenal and they had few clear-cut chances – with Pierre-Emerick Aubameyang and substitute Alexandre Lacazette shooting wide from outside the box. Sterling, who was selected on the left wing over Leroy Sane, opened the scoring when he received a pass from Mendy, making his first Premier League start since September.

Record goalscorer Sergio Aguero should have had his 202nd City goal when he was played in one-on-one from the halfway line but he shot right at Cech – with De Bruyne free in the centre. Bernardo finally sealed the points when he finished from Mendy’s cutback. It would be unfair to judge Arsenal – or Emery, who replaced legendary manager Wenger this summer – based on a performance against the country’s outstanding team. 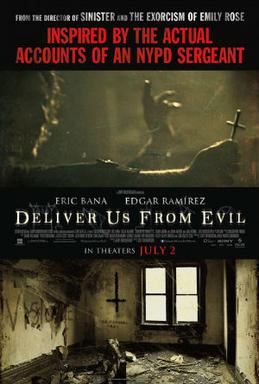 Deliver Us from Evil is a 2014 American supernatural horror film directed by Scott Derrickson and produced by Jerry Bruckheimer. The film is officially based on a 2001 non-fiction book entitled Beware the Night by Ralph Sarchie and Lisa Collier Cool, and its marketing campaign highlighted that it was “inspired by actual accounts”. The film stars Eric Bana, Édgar Ramírez, Sean Harris, Olivia Munn, and Joel McHale in the main roles and was released on July 2, 2014.

Three marines find an underground cavern and when they explore it it goes all dark and they start to scream. Three years later, Bronx detectives Ralph Sarchie and his partner Butler are called to investigate a domestic abuse situation. When they get there the man Jimmy, one of the Marines, tries to say things are cool but when the cops see the wife with bruises and a blackeye, he bolts and escapes. Sarchie catches up to Jimmy and makes the arrest; although, not without suffering a sizable wound to his forearm that will require stitches. The officers notice that Jimmy’s fingernails are cracked and bleeding, and they assume that he is mentally ill or high on drugs.

At the Bronx a woman throws her baby into a moat and the cops investigate finding her in a feral state rapidly recites the lyrics to “Break On Through (To the Other Side)”. Sarchie notices a painter inside the lion enclosure. He enters the pen to interrogate the mysterious man, but he is attacked by the lions and barely escapes. The deranged woman is taken to the precinct where a Jesuit priest, Mendoza, who comes on her family’s request and he asks a bunch of questions to the cops. At another domestic disturbance at a house where light bulbs instantly burn out and candles will not remain lit, cops find the body of one of the painters who were working on the basement, David Griggs. Sarchie & Butler find a picture of Griggs with Jane Crenna and the child that she threw at the zoo at the desceased’s apartment. In another picture, Griggs is pictured in his Marine uniform with Jimmy Tratner and a third Marine, Santino. They realize Santino must have been the painter at the zoo.

Mendoza believes that Jane is possessed by demons, and he explains that there is secondary evil created by humans and primary evil which comes from demons. Sarchie is skeptical, but when he reviews the surveillance footage with Butler, he hears strange noises and sees things that Butler does not. Sarchie returns to Jimmy Tratner’s house and finds a wall that was being painted in Jimmy’s home office. He scrapes away the paint to find a pictograph of an owl. At Sarchie’s home, his daughter lies in bed as a stuffed owl stares ominously at her from a shelf in her bedroom. She is awakened by strange noises and frightened. Sarchie has scraped finds a bizarre mix of Latin and ancient pictographs and some hard drives with footage from Tratner’s deployments and watches the full footage from the palm grove in Diyala.

In the cave, the soldiers found a carving of the same message that is on the wall in Tratner’s home as well as the basement and the zoo wall. With Mendoza, he visits Jane Crenna in the mental hospital and shows her the message from the cave. She savagely bites Sarchie’s already wounded forearm.Mendoza decodes the message as a kind of bridge between Christian and pagan theology which would theoretically allow demons a door to the human world. He explains that certain people are more susceptible to such messages than others. Mendoza goes with Sarchie and Butler to an apartment building where they are attacked by Santino and Jimmy Tratner. Tratner is subdued by Mendoza’s cross. Santino overwhelms and eventually kills Butler.

At Sarchie’s home, his daughter is once again awoken during the night. Her stuffed owl rolls off the shelf and advances towards her bed. As she runs screaming from the room, she sees Santino in the hallway. Sarchie arrives home to find Santino in his living room. Santino warns that he has abducted Sarchie’s wife and daughter. Santino is brought to the precinct where Mendoza and Sarchie perform an exorcism on him. Sarchie’s wife and daughter are located in an Alphonsus Painting van at a storage facility. The film ends with the baptism of the Sarchies’ second child.

While it started out and had some promise, the movie turns out to be another one of these stupid Christian theology and mythological nonsense which is propaganda by 2001 non-fiction book entitled Beware the Night by Ralph Sarchie and Lisa Collier Cool. Disappointed. 6.5 outta 10!