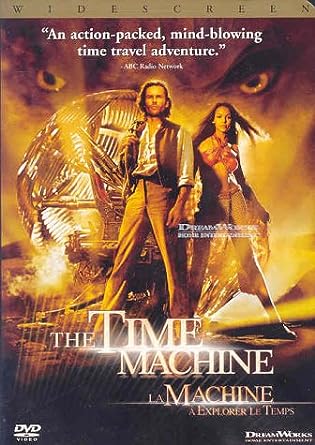 I watched several movies during my break from work. The first one was a movie which I seen a few times before but on checking my blog, saw that I hadn’t reviewed it. The movie in question is The Time Machine, which is based on the famous book by H G Wells of the same name and similar to the 1960 movie. Arnold Leibovit served as executive producer and Simon Wells, the great-grandson of the original author, served as director. The film stars Guy Pearce, Jeremy Irons, Orlando Jones, Samantha Mumba, Mark Addy, Sienna Guillory and Phyllida Law, and includes a cameo by Alan Young, who also appeared in the 1960 film adaptation.

However it does not take the entire plot of the book or the previous movie that did stick to the original story. Instead we have a very loose storyline that leaves you not entirely satisfied with the ending. There was so much more could have done with the movie, but it was like they were in a rush to finish the film. Maybe the directors wanted to keep the film short and short it is….it falls way short of my expectations and I think it was a waste to shoot this movie without having a well written script & thought out process. The film is set in New York City instead of London, and contains new story elements not present in the original novel or the 1960 film adaptation, including a romantic backstory, a new scenario about how civilization was destroyed, and several new characters, such as an artificially intelligent hologram played by Orlando Jones, and a Morlock leader played by Jeremy Irons.

After his fiance Emma is killed in a mugging gone wrong, Alexander creates a time machine within a 4 year span. He goes back in time and saves Emma by avoiding the park where she was killed but later that night she is killed by a runaway horse carriage. Alexander realizes that any attempt to save Emma will result in her death through other circumstances. Distraught, Alexander travels to 2030 to discover whether science has been able to solve his question of how to change the past. At the New York Public Library, a holographic sentient librarian called Vox 114 insists that time travel is impossible. Alexander travels to 2037, when the accidental destruction of the Moon by lunar colonists has begun rendering the Earth virtually uninhabitable. While restarting the time machine to avoid debris, he is knocked unconscious and travels to the year 802,701 before reawakening.

The human race has reverted to a primitive lifestyle and the Earth has healed. Some survivors, called “Eloi”, live on the sides of cliffs of what was once Manhattan. Alexander is nursed back to health by a woman named Mara, one of the few Eloi who speak English. He observes the broken moon and suggests that maybe his teachings led to this future. He makes friends with Mara and her younger brother Kelan, one of few Elio who still speak English.  The next day, the Eloi are attacked and Mara is dragged underground by ape-like monsters. The creatures are called “Morlocks” and they hunt the Eloi for food. In order to rescue her, Kalen leads Alexander to Vox 114, which is still functional after 800,000 years.

Alex goes to an underground cave and is capture by the Morlocks and taken to an area where Mara sits in a cage. Alexander meets an intelligent, humanoid Morlock, who explains that Morlocks are the evolutionary descendants of the humans who went underground after the Moon broke apart, while the Eloi are evolved from those who remained on the surface. The humanoid Morlocks are a caste of telepaths who rule the other Morlocks. The Morlock explains that Alexander cannot alter Emma’s fate, because her death is what drove him to build the time machine in the first place: saving her would be a virtual impossibility due to temporal paradox. He then reveals that the Morlocks have brought the time machine underground, and tells Alexander to get into it and return home. Alex does but fights the Morlock and ages him by pushing him outside of the machine’s temporal bubble.

Alexander stops in the year 635,427,810, revealing a harsh, rust-colored sky over a wasteland of Morlock caves. He goes back and saves Mara, destroying the rest of the Morlock by starts the time machine and jams its gears, creating a violent distortion in time. Pursued by the Morlocks, Alexander and Mara escape to the surface as the time distortion explodes, killing the Morlocks and destroying their caves along with the time machine. Alexander begins a new life with Mara and the Eloi. Back in his own time, his housekeeper is talking with Philby, Alex’s best friend, who offers her a job in his household as he knows that Alex isn’t coming back.

I like this movie a lot but there are two many changes that don’t seem to fall in properly and the explanations of the newer themes and changes takes away the simplistic yet romantic charm of the original storyline. Nevertheless I still like it enough to rate it a 7.5 outta 10!