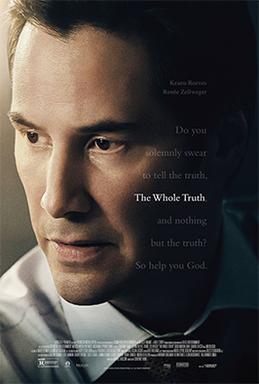 The Whole Truth is a 2016 American thriller film directed by Courtney Hunt and written by Nicholas Kazan. The film stars Keanu Reeves, Gabriel Basso, Gugu Mbatha-Raw, Renée Zellweger, and Jim Belushi. The film was shot and set in Louisiana.

The movie is about the trial of a murder – Mike, a 17 year old boy, has admitted to stabbing his father, wealthy lawyer father Boone Lassiter. Defense attorney Richard Ramsay, who has worked with Boone and is a family friend, is asked by Boone’s widow Loretta Lassiter, Mike’s mother, to defend her son. Problem is Mike won’t speak to anyone, even his mother and his lawyer and seems to react with hostility towards Richard. The trial starts and it is shown by the defense that Boone was a drunkard and abused his wife physically and verbally (in front of friends at a party as one neighbour admits to when called to the witness stand). The neighbour’s son, who has had a crush on Loretta, has seen her being roughly treated by Boone.

Ramsay enlists the help of a young lawyer Janelle as his assistant, who is determined to find out the truth about what happened.  Loretta now testifies that Boone did indeed verbally and physically abuse her many times, with the most recent time on the day of his death. After Boone assaulted her, she went into bathroom to have a shower. When she came out, she saw Boone was already dead and Mike was standing near his corpse. Ramsey presents a health report as evidence, which proves her injuries. Mike finally speaks and says he will speak in court but won’t tell Richard what he will say. Mike affirms in court that his father did frequently assault his mother, but that was not the reason he killed him.

Mike reveals that Boone had molested him many times throughout his teenage years, and he wanted to go to a further university to escape from his father. He also states that Boone was angry over this decision and raped him on the flight, and was attempting to do so again before he left for college. This caused him to fight back at his father and lead to him stabbing Boone with a knife. The prosecutor requests the flight attendant to be recalled, who insists that she did not notice Mike being sexually assaulted by his father. However, Janelle (with suggestions from Mike) reveals that the flight attendant had an extramarital affair with the pilot, and lied in court to avoid being discovered. This information was enough to discredit her testimony and win support from the jury.

After reconsidering Mike’s testimony and his mother’s reactions, Janelle confronts Loretta outside the courtroom. She deduced that Loretta killed Boone after being assaulted, and Mike was merely trying to take the blame himself to protect his mother. Loretta angrily denies this accusation. Ramsey does not take Janelle’s theory seriously and dismisses it. The jury announce their decision: Mike Lassiter is found not guilty of murder. Ramsey congratulates Mike, but Mike asks to speak with him in private. Mike approaches Ramsey outside of court and reveals that he saw Ramsey’s watch at the scene of the crime and angrily accuses Ramsey as the one who murdered his father.

After everyone leaves, Ramsey thinks about the actual events – he was having an affair with Loretta as she was unhappy in her abusive marriage and kills Boone who became suspicious of his wife’s infidelity. They planned to disguise it as self-defense and Loretta beats herself with a stone to fake injuries & bruises but  but before he and Loretta could tamper with the crime scene, Mike returned home. Ramsey hastily escaped from the Lassiter house, and Mike subsequently planned the series of events to protect his mother. He then leaves the courthouse.

Pretty tame movie, it looks very low budget and I am not sure what actors of the calibre of Reeves, Zellweger & Belushi found attractive in it. It could have been way, way more entertaining and better. 6 outta 10!