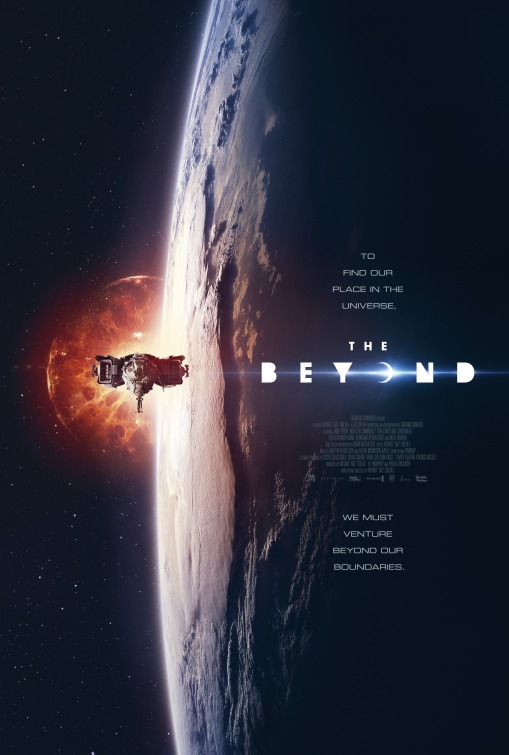 The Beyond is a 2017 independent science fiction thriller film written and directed by Hasraf Dullul. It was Dullul’s first feature film as a director and is loosely based on the 2014 short film Project Kronos. The movie is shot like a documentary. The cast is mostly working actors like Jane Perry, Nigel Barber, Noeleen Comiskey, etc.

In 2019 an anomaly, nicknamed The Void, appears above the Earth. Communications are disrupted, there is a power outage on the International Space Station (ISS), and an astronaut, Jim Marcell, goes missing (presumed dead). Alex Grant (Barber), Head of Exploration Missions, reveals that this isn’t the first time the anomaly has been encountered, as it first appeared in 1990 when it was visible for two months before mysteriously disappearing. The Space Agency, run by Gillian Laroux (Perry) sends probes into the anomaly. Communication with the probes is soon lost, but data analysis reveals it might be a wormhole, with a planet-like structure on the other side. Cosmologist Jessica Johnson (Comiskey) argues that this could be a first contact event. Despite resistance from her team, Laroux wants to send astronauts to investigate further.

Astrophysicist Professor Jakob Brukiehm (David Bailie) who says it would be suicidal to send  to send astronauts to investigate further due to the gravitational waves. The only feasible solutions he says are robotics or probes. Strange orbs then begin to appear in the sky and The Void starts emitting waves. Concern rises about the threat posed by The Void and The Spheres. A secret US military organisation offers its classified robotics technology – Human 2.0 – to help solve the Space Agency’s dilemma. Human 2.0 was designed to fuse human brains with synthetic bodies to create more robust soldiers. The US military argues this technology will allow the Space Agency to send an astronaut successfully into The Void.

After they go through a few candidates, wheelchair user and drone pilot Carl Roberts (Tom Christian) is selected. However, the procedure to fuse Roberts’ brain with the synthetic body fails and Roberts dies. After struggling with her decision, Jessica Johnson volunteers to be the next candidate and this time the procedure is successful. The US military also produce a Human 2.0 soldier to accompany Johnson on her mission, with this version containing unspecified weaponry. Johnson and the 2.0 soldier are launched into The Void, with Johnson reporting beautiful lights before disappearing. Five days later the mission returns unexpectedly, but when the capsule is recovered only Johnson is in the craft, with no sign of the Human 2.0 soldier. The craft looks like it has been in space for a very long time.

By the time Johnson regains her consciousness, scientists retrieve data from her brain and discover several years of memories have been made – far more than the week since she was launched into The Void. As people begin to panic, military begin to attack the spheres. Johnson wakes up and reveals what she remembers after the communications blackout. She says there was a lot of light and when she closed her eyes the Human 2.0 soldier was mysteriously transported out of the craft. She says the soldier looked fearful and kept looking at his arm, which detonated like a nuclear bomb. She passed out and awoke on a planet. On the planet she met Jim Marcell who communicated to her that everything was going to be okay. The Space Agency is sceptical about Johnson’s memories, although Laroux is hopeful this means Marcell is alive and The Void and The Spheres are not malicious.

The solar system is them destroys and debris heads towards the earth Suddenly The Spheres begin to change and form a protective barrier around the earth. The realisation dawns that the presence of The Spheres has been completely misinterpreted as an attack, whereas they’d been sent to protect the earth. The Void disappears. Marcell is detected in the Arizona desert unharmed but without any memory of what has happened. In the aftermath of the events, a new solar system appears, with another planet almost identical to earth, offering new hope for humanity. The film ends with Human 2.0s on Earth 2.0 encountering the lifeforms from The Void.

A very ambitious and original storyline and film and it shows how much you can do with a very limited budget. The documentary style makes it almost credible but it also makes it lack excitement and energy. 6.5 outta 10!