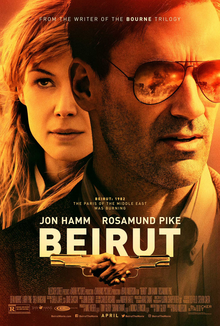 Beirut, also known as The Negotiator (UK), is a 2018 American espionage thriller film directed by Brad Anderson and written by Tony Gilroy. Set in 1982 during the Lebanese Civil War, the film stars Jon Hamm as a former U.S. diplomat who returns to service in the titular city of Beirut in order to save a colleague from the group responsible for the death of his family. Rosamund Pike, Dean Norris, Shea Whigham, Larry Pine and Mark Pellegrino also star. Principal photography began in Morocco in June 2016.

Mason Skiles, leaves Beirut in 1972 after his wife Nadia is killed at a party at their diplomat’s residence house.  They have recently begun caring for Karim, a 13-year-old Palestinian boy who claims he is without a family. While hosting a party, Skiles is confronted by his friend, CIA officer Cal Riley, who wishes to question Karim, whose brother has been linked to the 1972 Munich massacre. The party is attacked by Karim’s brother, Rami, who abducts Karim; in the ensuing gunfight, Nadia is killed. 10 years later, working as a labour disputes lawyer, he is approached by the CIA to go to Beirut and negotiate the release of Cal, who has been kidnapped by a terrorist group.

They have asked for Mason specifically to be the negotiator. Mason’s leaves for Beirut under the guise of conducting an academic lecture in Lebanon, and is handed money, a plane ticket, and a passport.  He meets several government officials, including Donald Gaines, Colonel Gary Ruzak, and Frank Shalen, along with CIA officer Sandy Crowder, and learns that Cal Riley was recently abducted in Lebanon. At the meeting, Mason learns why he was asked to be involved – a grown up Karim is leading the group. Karim demands the release of his brother in exchange for Riley, despite the Americans’ protest that they do not have Rami in captivity and they in turn think Israel may have him.

Mason has a meeting with Alice, Cal’s estranged wife who tells him that Cal stayed in Beirut because of guilt at Nadia’s death. At the lecture, the building is bombed and Karim makes contact with Mason and takes him to see Riley, who tells him that the PLO has Rami. Before releasing Skiles, Karim threatens that unless Rami is returned later that night, he will sell Riley to Iran. Skiles returns to Riley’s apartment to search for clues, where he encounters Crowder. She reveals that Gaines had been stealing money from the embassy and that Riley had been preparing to make a report shortly before his disappearance. Skiles convinces Crowder that the PLO is holding Rami, and she steals $4 million from the CIA office to trade for Rami.

Mason attacks a PLO officer and arranges for exchanging Rami for money. At the exchange, Rami is shot and killed by a Mossad sniper in a nearby building but the Americans successfully escape. Before departing Beirut, Skiles learns that Gaines has unexpectedly retired and that Ruzak has left Beirut. Crowder announces her intention to apply for the newly vacant jobs, and Skiles offers his services as a negotiator. As the film ends, news footage is shown of the subsequent Israeli invasion of Lebanon, increasing international involvement in the country, and, finally, the bombings of the U.S. Embassy and the U.S. Marine Corps’ barracks in Beirut in 1983.

Solid cast and some really good acting saves this film. It does have some fine moments and tension filled scenes. Give it a watch. 7.5 outta 10!