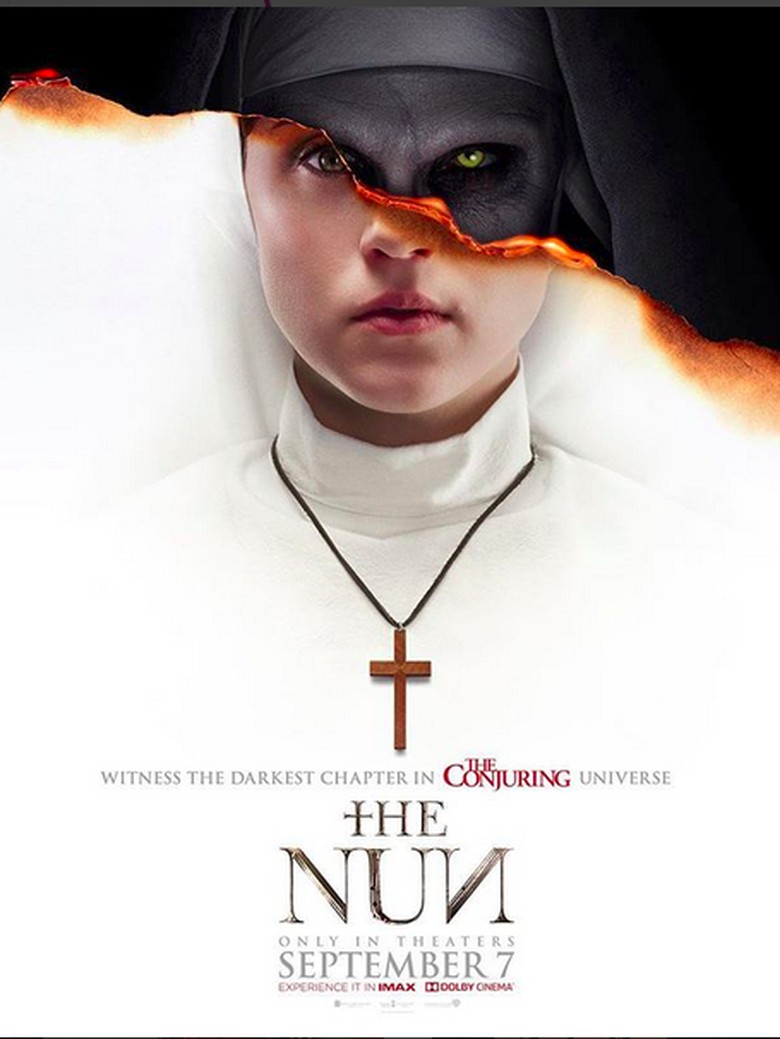 The Nun is a 2018 American gothic supernatural horror film directed by Corin Hardy and written by Gary Dauberman, from a story by Dauberman and James Wan. A spin-off of 2016’s The Conjuring 2, and the fifth installment in The Conjuring Universe, the film stars Demián Bichir, Taissa Farmiga, and Jonas Bloquet. The plot follows a Roman Catholic priest and a nun in her novitiate as they uncover an unholy secret in 1952 Romania.

As the movie starts we see two nuns go into the tunnels of Saint Cartha’s monastery to retrieve an ancient Christian relic and enter through a door that reads “god ends here” (Really? He is that weak that he has to end at a door after which demons reside?) and are attacked by an unseen force, which later  takes the form of a demonic looking nun. The younger nun runs to her room and hangs herself. Her body is discovered by Frenchie, a villager who transports supplies to the nuns. On hearing the news the Vatican, summons Father Burke to Rome, where they ask him to travel with Sister Irene, a nun in her novitiate, to Romania in order to investigate the situation.

The pair travel to Romania and seek out Frenchie, who is in fact a French-Canadian named Maurice, and who leads them to the abbey. There they find a key on her and then enter the abbey where they see the veiled abbess (or mother superior) who informs them that the nuns observe a period of silence during the night and offers them lodging at the attached convent if they wish to return the next day. On his way home Frenchie is attacked by a demon but he manages to escape. Irene reveals that as a girl, she had visions particularly of a nun, causing the Church to take an interest in her. Burke is rescued by Irene after being buried alive in the graveyard by the demonic entity.

The nest day as it is cloistered, only Irene can enter the abbey and she talks to some of the nuns, who are taking turns praying. to keep the entity at bay. Sister Oana reveals the abbey’s history: it was built as a castle by a duke who was obsessed with the occult. The duke summoned the demonic entity through a rift in the catacombs but was killed by Christian knights, who sealed the rift with an artifact containing the blood of Jesus Christ. The bombings during the Second World War caused the rift to reopen, unleashing the entity. Burke identifies the entity as Valak and discovers the Abbess has been dead all along. Frenchie meanwhile heads to the abbey Irene is attacked by Valak and joins the nuns in desperate prayer to fend off the demon.

When the group reunites, Irene discovers that none of the nuns she had seen and talked to were real and she had been praying alone, later realizing that Victoria had been the last nun in the abbey and had sacrificed herself to stop Valak from possessing her body and unleashing evil. The trio retrieves the vial with the key Victoria had. Irene then informs Burke that God has called her to make her solemn vows as a nun and asks Burke to elevate her to the status of a professed nun, which he does in the abbey’s chapel. Irene is lured into a pentagram and possessed by Valak. Frenchie smears some of the blood of Christ on her face, casting out the demon. Burke is wounded by Daniel’s ghost as Valak starts to drown Irene in a flooded chamber. Irene expels the blood of Christ in the demon’s face, banishing it as the blood of Christ seals the rift.

After Frenchie resuscitates Irene, he reveals his real name is Maurice. Unbeknownst to the others, Maurice has been possessed by Valak, as evidenced by an inverted cross on his neck. As the movie ends we see a scene from 20 years later, ata university seminar, Carolyn Perron watches as Ed and Lorraine Warren present footage of their attempt to exorcise a possessed Maurice. In the footage, Maurice grabs Lorraine, giving her visions of Ed dying, which initiate the Warrens’ investigation of the Perron household haunting, as well as their encounter with Valak itself.

Slightly boring though the movie picks up pace towards the latter half, and reliant too much on jump scares, I was let down by this film. It lacks any real charm and sense of foreboding that I was hoping it would have as Valak is a real treat to watch. 6.5 outta 10!

I have this recurring dream – well, I’ve had it atleast 3 times in various formats. Long time readers of my blog should know that I love dogs and I’ve had a dog named Shawny, a golden retriever, for 11 years before she passed away in 2005. I loved that dog a lot as she was my best friend ever and I miss her every day. This dream therefore creates alarms in my mind.

In this dream I’m coming home from work or something and going to my old family house in Thrikkakara (another nostalgic hold, as I can’t seem to shake the images of my old house in my dreams even though it hasn’t been home since we sold it back in 2006) and as I pass the gate that leads into our front car porch / driveway I hear a bark. A bark? I don’t have a ….and suddenly I remember that I have not just a dog (a Labrador retriever) but also a puppy (a black dog, unsure of the breed) in large kennels at the back of my house.

And I realize that I haven’t fed them in ages and in horror I run and get some food and water and place the bowls in front of them and let them outta their cages. After they eat hungrily and gulp a lot of water, the two dogs gratefully start licking my hands as I cry in front of them.

In all the cases, I wake up soon after and wonder what this means.