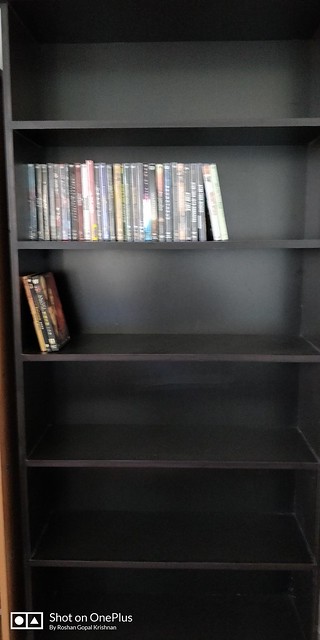 I am surprised that I didn’t post about this sooner. But I did get my new dvd shelf. I guess you can call it a dvd shelf, though most people would call it a bookshelf. There are a couple of things that the carpenter go wrong though. This was custom made but…the shelves are taller than I had asked for. The gap in between was supposed to be shorter so I don’t have waste of space.

Secondly, I had asked for a dark rosewood finish, like some of the shelves that he had shown me at the shop. But two days before they were scheduled to deliver it to me, he called me and said that they ran out of rosewood finish (which I had really liked and thought would look more awesome) but they had black and would that do.

Now, black is the usual default colour for dvd shelves and when I first thought about getting a shelf I had black in mind. But having gone to the furniture store and seen the finished products of the rosewood finish, I was really looking forward to that. But if I had said no and waited for them to get the rosewood finish then it would have been a long wait.

As it was they were late by a couple of days. Initially he had said that week Tuesday (13 Nov) and I said even Wednesday morning would be fine but that was when he called me and said that they didn’t have any rosewood finish remaining. So we settled for Thursday evening but then the carpenter’s mom was taken to the hospital so we decided it would be Friday evening.

Friday the 16th was that major storm we had in Cochin and the rest of the state and he called me to say that they were trying to get it delivered but the storm was so bad. I told him to wait till 5:30 pm and see if the storm eases and if not to abandon it. Saturday was a sudden harthal called so I ended up getting the shelf delivered to me on Monday the 19th of November. 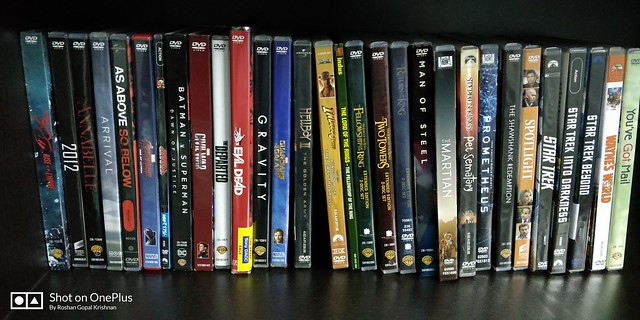 Here is my small but growing collection of dvd movies that I have started collecting. My main options to buy dvds from are Amazon India and Flipart. I hope to get a nice collection going.