Phil Jagielka scored the only goal as Everton beat Arsenal at Goodison Park to claim their third consecutive Premier League win. Jagielka, who was called into the starting XI as a replacement for Michael Keane shortly before kick-off, poked home early on following Dominic Calvert-Lewin’s header from Lucas Digne’s long throw. Arsenal were poor in the first half and, while they did improve in the second, they never seriously tested Jordan Pickford in the Toffees goal. Everton, meanwhile, had plenty of chances to double their lead in the second half as Bernard, Richarlison and Gylfi Sigurdsson all spurned chances. Victory for Everton means they leapfrog Watford into ninth while Arsenal remain in fourth.

Everton only announced Jagielka was starting 15 minutes before kick-off – a late replacement for Keane who dropped out of the matchday squad due to illness. But it only took the club captain 10 minutes to get on the scoresheet as he capitalised on confusion in the Arsenal box to fire home his first goal since April 2017 from close range. The hosts went on to dominate for much of the first half with Brazilian pair Richarlison and Bernard causing problems as they found plenty of space in behind the Gunners’ wing-backs.

While the visitors did improve after the break with the introduction of Aaron Ramsey and Pierre Emerick-Aubemeyang, the Toffees were still largely the better side. Bernard should have doubled his side’s lead on 59 minutes when an error by Ainsley Maitland-Niles presented him with a one-on-one with Bernd Leno which the keeper saved well. And there were more chances for the hosts as the game drew to a close, too, as Sigurdsson could only shoot straight at Leno from Richarlison’s cut-back, while the Brazilian skewed his own effort wide with the goal gaping.

There were further opportunities for Bernard, Andre Gomes and substitute Theo Walcott as the Toffees piled on the pressure but they could not find a second goal. However, they were not made to pay for their lack of cutting edge as they claimed a victory which sees them string together three consecutive league wins for only the second time this season and the first since October. 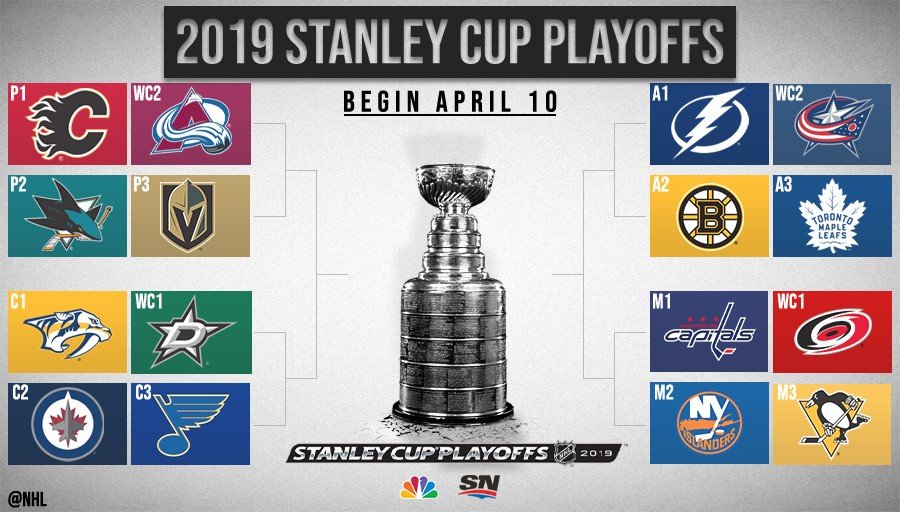 The Stanley Cup playoffs are set to begin play Wednesday.

In the East, the Tampa Bay Lightning have to be the favorites after tying the Detroit Red Wings’ regular-season wins record set during the 1995-96 season. But seven really good hockey clubs are aiming for the Bolts.

In the West, Calgary has been at the top of the standings for the final third of the season, but the Flames aren’t a must-bet favorite like Tampa in the East. Winnipeg, Nashville and Vegas have been up and down but could all tear apart the West with a month of stellar play.