Here is my review of Godzilla : King Of The Monsters – I must say that the 3 part poster looks amazing. 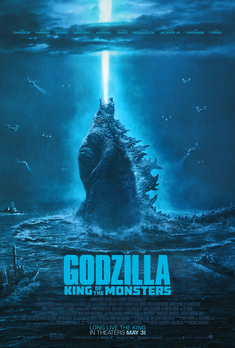 Godzilla: King of the Monsters (released as Godzilla II: King of the Monsters in some markets) is a 2019 American monster film directed by Michael Dougherty and co-written by Dougherty and Zach Shields from a story by Max Borenstein, Dougherty, and Shields. A sequel to Godzilla (2014), it is the 35th film in the Godzilla franchise, the third film in Legendary Pictures’ MonsterVerse, and the third Godzilla film to be completely produced by a Hollywood studio. The film stars Kyle Chandler, Vera Farmiga, Millie Bobby Brown, Bradley Whitford, Sally Hawkins, Charles Dance, Thomas Middleditch, Aisha Hinds, O’Shea Jackson Jr., David Strathairn, Ken Watanabe, and Zhang Ziyi. It is dedicated to executive producer Yoshimitsu Banno and original Godzilla suit performer Haruo Nakajima, who both died in 2017.

I can’t say that this was very entertaining for me. It failed to capture my attention for long and a few times I was struggling to stay awake in the afternoon. I can say that I did love the effects, especially the monsters but the movie as a whole lacks the pacing, tone and storyline to keep me enthralled. The humans in the movie feel like props more than anything and I could even see a movie of just the monsters dukeing it out, without any human intervention, being more engaging and entertaining. Mothra looks amazing, Godzilla, King Ghidorah & Rodan – all look amazing and fantastic. The fights between the creature are exciting. Acting wise, it should have been better but I guess the actors can only do so much with what they are given. The cast is actually a very good one and I was disappointed that one of my favourite character actresses, CCH Pounder, was only in a single scene.

Also when it comes to acting, although I love the inclusion of Asian characters and actors in big budget movies (especially here since it is based on Japanese lore) but I find it difficult to follow Zhang Ziyi when she speaks. It’s not the poor actress’s fault since she is probably doing her best. But when she is stressing way too much on how she pronounces, it leaves the rest in the wake. I just feel like they should have gotten someone else. I do love seeing the young Millie Bobby Brown who is fast becoming an actress to watch out for and I am a fan of Kyle Chandler & Vera Farmiga, in this film you could have easily replaced them with unknowns and the movie would have still remained the same. I hope the actors were payed a lot of money!

Other than a continuity and therefore important, I would give this movie a miss. I am looking forward to the next one in which Godzilla and King Kong face off and that one could be a hit! I cannot wait. As for Godzilla: King of the Monsters, I give it 6 outta 10!